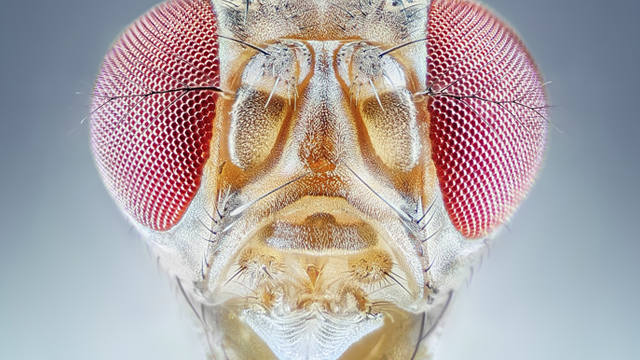 Contrary to the din of some warm summer nights, with choruses of grasshoppers, katydids, crickets, or cicadas chirping away, relatively few insects use acoustic information to communicate with their peers. In fact, outside of these familiar groups, only a very few moth, butterfly, and fly species produce calls. For the insects that do, however, researchers say that sounds they make constitute “singing.” 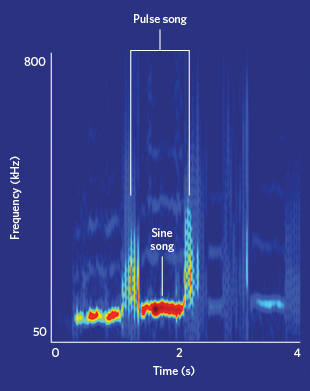 HIGH-FREQUENCY FLY CRIES: Using wing vibrations, Drosophila males can produce two different song modes—pulse and sine—varying the ratio and pattern of the two types depending on the situation.COURTESY OF PIP COEN“I don’t want to get caught up in semantics, but it basically has to do with using sound as a means of sending information,” says evolutionary biologist Michaël Greenfield of CNRS’s insect research institute (Institut de Recherche sur la Biologie de l’Insecte) at the University of Tours in France. “If they...

Most insect sounds are relatively simple. In crickets and related species, for example, males repeatedly produce a simple chirp—made by rubbing the top edge of one wing across serrations on the other wing—to attract mates. (In a few species, females are known to duet with males.) But a group of crickets chirping in the same vicinity can produce something quite complex indeed. As in frogs and toads, the sum of the population’s calls is termed a chorus, as the calls take on “a certain harmony,” says Greenfield. But to date, there is no evidence that this chorusing serves any function in insects. In fact, Greenfield and his colleagues have recently shown in one species of katydid, Ephippiger diurnus, that chorusing is an emergent property of the insects’ tendency to adjust the timing of their calls to avoid singing just after a neighboring male, as females tend to ignore calls that follow too closely behind another (Behav Ecol Sociobiol, 69:1957-73, 2015; Sci Rep, 6:34369, 2016). “When everyone is playing that game, trying to time their song effectively, then the chorus emerges,” says Greenfield.

The calls of other singing insects are undetectable by the human ear. Moths, for example, broadcast ultrasonic mating signals outside the range of human hearing, and Drosophila sing very quietly—at least a million times below the human threshold. First documented in the 1950s, Drosophila “song” is actually quite complex relative to the calls of other insects, says Pip Coen, a research associate at University College London. In contrast to the simple cricket chirp, Drosophila calls, produced by wing vibrations, have two modes—pulse and sine—and a male can vary which he produces depending on the situation: courtship of females versus conflict among males, for instance.

The intricacy is interesting in and of itself, but also for what it says about Drosophila neurobiology. “It’s a complex signal the brain has to interpret,” says Coen—and only in the last decade or so have researchers been able to record directly from the central brain neurons in female flies to start to assess the neural circuitry underlying the perception and processing of males’ calls. “We’re just realizing how interesting and complex a problem it is.”

Read about the rest of the animal chorus, including birds, bats, rodents, amphibians, whales, and fish, in “Song Around the Animal Kingdom.”