Scientists race to develop CRISPR therapies that could save the lives of kids with muscle-wasting conditions.

ABOVE: In patients with muscular dystrophy, muscle fibers (purple) are replaced by adipose tissue (black) as muscles waste away and lose function. (Mesenchymal tissue shown in green and yellow.)
© PATRICK LANDMANN, SCIENCE SOURCE

If Chengzu Long hadn’t been quite so unlucky, he might never have attempted to study and treat Duchenne muscular dystrophy. As a PhD student in Eric Olson’s lab at the University of Texas Southwestern Medical Center, Long had spent years knocking out genes in mice to try to identify their role in muscle development and disease, only to find that each of the resulting knockouts had no discernible differences from wildtype individuals.

In the fall of 2013, with only about a year left until his planned graduation, Long decided to take a different approach: rather than generate yet another knockout mouse that might again lack a phenotype, he would use the new CRISPR-Cas9...

Like many muscle disorders, or myopathies, Duchenne is caused by mutations in a single gene—the X chromosome’s DMD gene, which encodes the protein dystrophin. Without a functional dystrophin protein, Duchenne patients gradually lose their mobility as their muscles degenerate. Most die by their early 30s from breathing complications or heart failure. “Duchenne is devastating,” says Olson, whose lab has worked on muscle development and disease for 30 years. “Right now there [are] 300,000 boys in the world with Duchenne, so it’s a large patient population, and there’s a desperation for a really transformative therapy.”

Because the genetics of the disease are well understood, researchers could theoretically replace the mutated version of DMD with a healthy copy to cure the disease. Unfortunately, the gene for dystrophin is massive, with 2.6 million base pairs. As a result, it’s not feasible to insert the entire gene, or even just the 11,000 coding base pairs (introns excluded), into a viral vector that could deliver the therapeutic package to the muscle. “Gene editing therefore was a great opportunity to correct the endogenous gene rather than trying to deliver” a nonmutated version of it, says Charles Gersbach, a biomedical engineer at Duke University.

By the end of 2013, multiple labs had successfully used gene editing to rescue the dystrophin protein in vitro, using cells from patients. So Long decided to try his luck at using CRISPR-Cas9 to edit the dystrophin gene in vivo. He injected the CRISPR system into the zygotes of mdx mice, which carry a single mutation in the gene for dystrophin. He then implanted the zygotes into female mice, and confirmed in their 10-day-old progeny that CRISPR-Cas9 had successfully corrected the mutation that causes Duchenne symptoms. When the corrected mice were a month old, Long tested their muscle function and found that it had also improved compared with mice carrying the uncorrected mutation. “We published one of the first in vivo rescues of phenotype [using CRISPR] in an animal model,” he says.

Now, just four years later, Olson has improved the gene-editing strategy to address the majority of human Duchenne mutations, and he and others have successfully tested these techniques in various mouse models, 3-D–engineered heart muscle, and dogs. With multiple research groups gearing up for clinical trials over the next few years, what they learn will have implications beyond Duchenne, as similar approaches could be applied to treat many other muscle disorders. 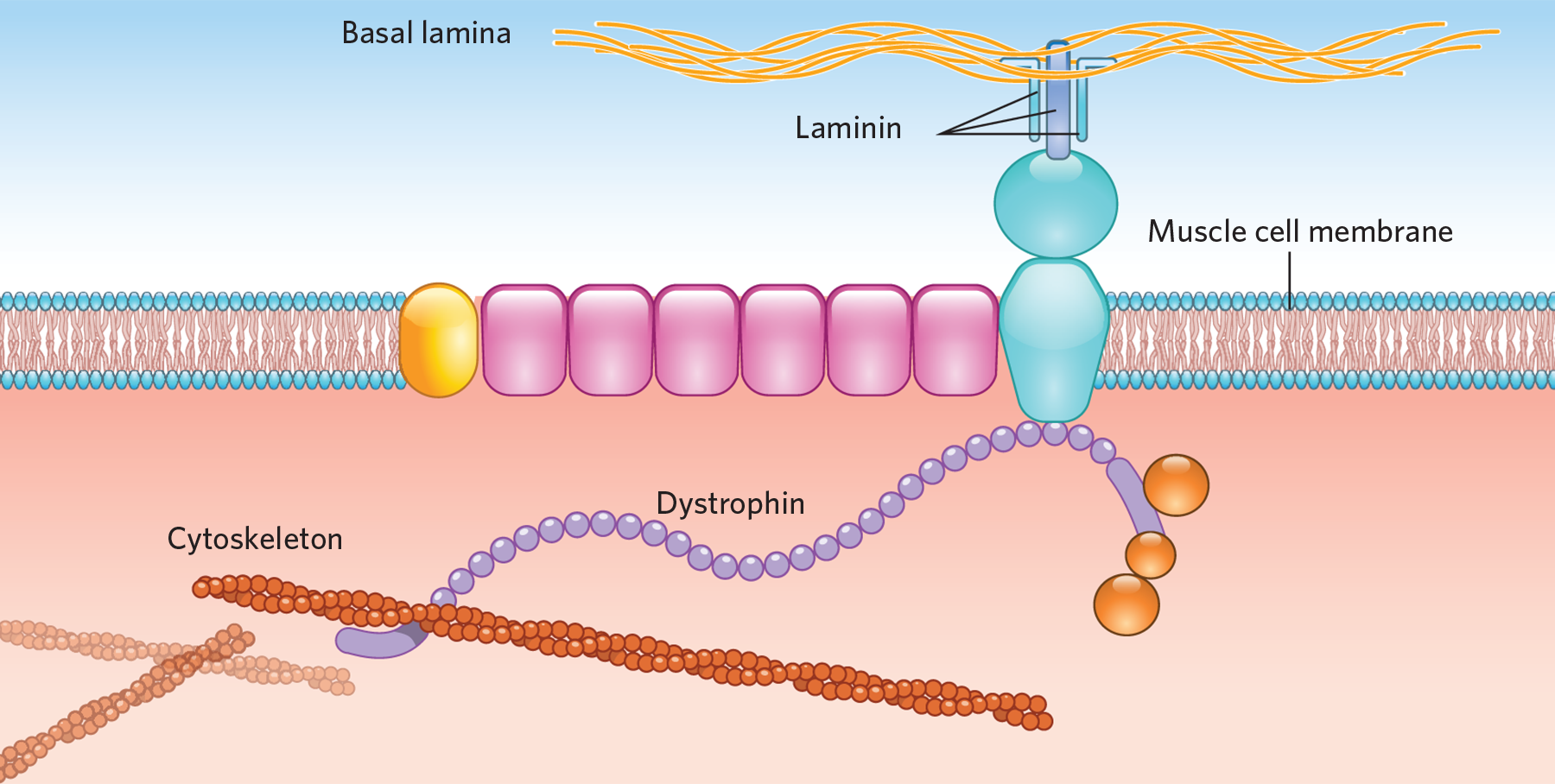 After successfully correcting the Dmd mutation in mdx mice during embryonic development, Long and Olson decided to use adeno-associated virus 9 (AAV9) to deliver the CRISPR system into mice after birth. They were again able to correct the gene mutation that led to the Duchenne phenotype, resulting in major improvements in muscle function.2 Gersbach at Duke and Amy Wagers, a stem cell biologist at Harvard University, simultaneously published similar results.3,4 “For the very first attempt, I personally thought the efficiencies were remarkably good,” says Wagers.

There are a few reasons why successful gene edits, once made, were so efficient in these examples. Muscle cells are multinucleated, with each cell having hundreds of nuclei. “If you can correct just a few of them you can protect the whole muscle fiber,” says Gersbach. And just a little dystrophin can go a long way toward improving muscle function, Olson adds. “It’s estimated that as little as 15 percent of normal dystrophin levels could be curative, or at least highly beneficial.”

What’s tricky, though, is restoring the defective parts of the gene in the first place. Doing so relies on a template-driven DNA repair process called homology-directed repair (HDR), which occurs infrequently in nondividing cells such as those of skeletal and heart muscle. “The problem with inserting stuff is that it’s very inefficient and makes the drug more complicated,” says Gersbach. “We’re exploring a number of ways by which we might increase that efficiency, but for the time being that’s not really an option.” 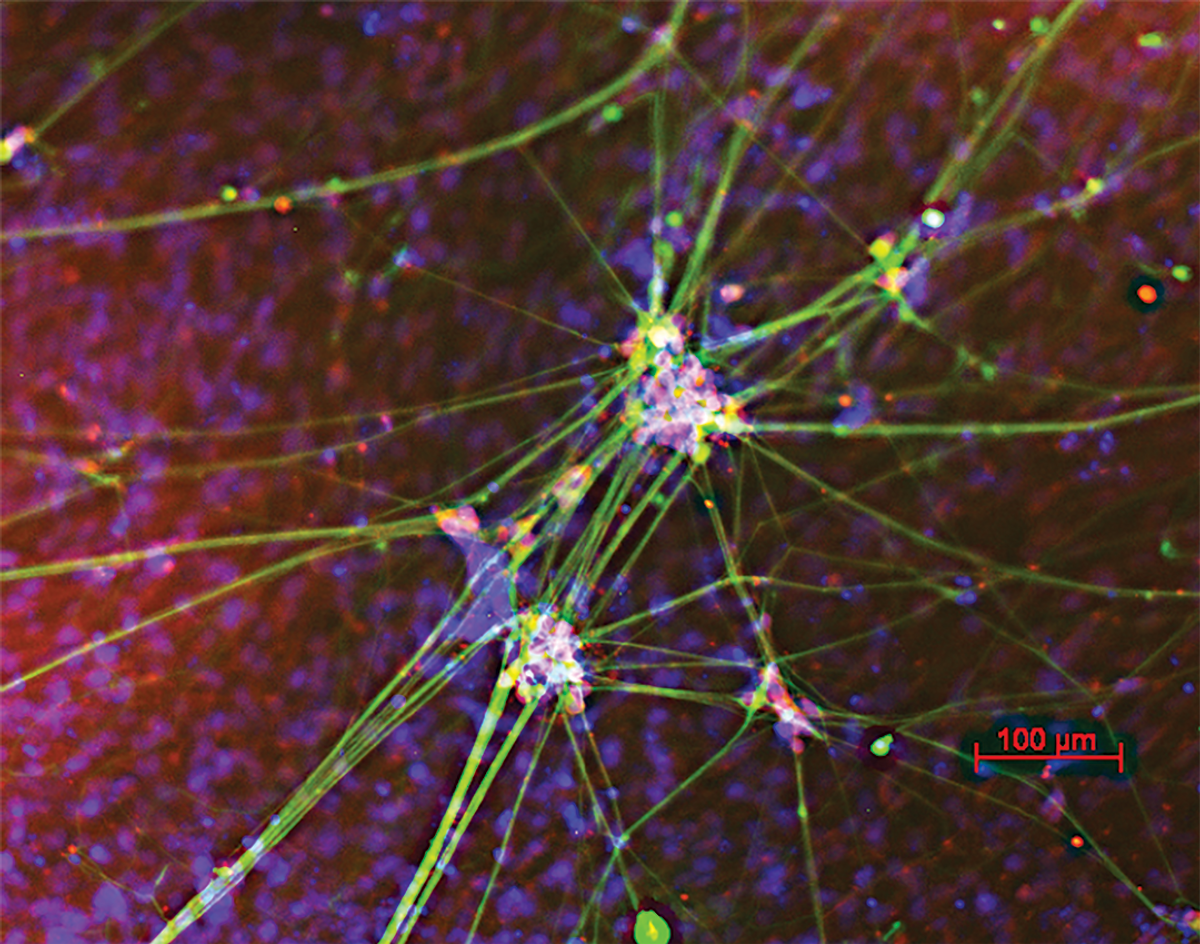 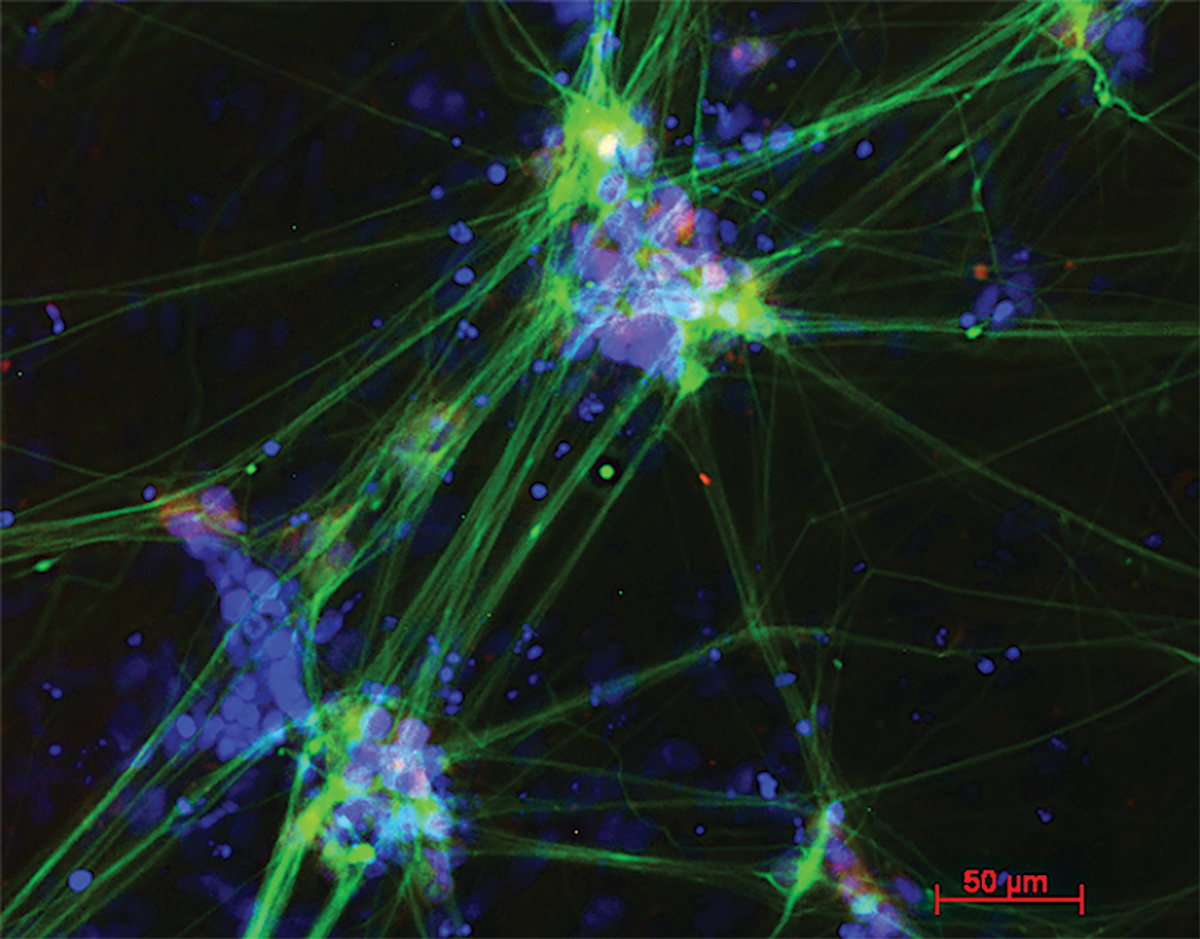 As an alternative, researchers can use CRISPR to initiate a different DNA repair process called nonhomologous end joining (NHEJ), which doesn’t rely on a template and is far more efficient than HDR. NHEJ can’t replace a defective gene with a wildtype version, but it can direct the removal of problematic portions of it. And there is good reason to think that such a strategy might work for Duchenne.

In Duchenne, DMD mutations disrupt the gene’s reading frame, causing translation to terminate prematurely and leading to a complete lack of a functional dystrophin protein. In a closely related disease called Becker muscular dystrophy (BMD), patients carry mutations in the DMD gene that are in-frame, typically deletions that result in a smaller but still partially functional dystrophin. As a result, patients with BMD generally suffer less-severe symptoms and survive considerably longer than Duchenne muscular dystrophy patients. “The dystrophin protein is built like a shock absorber with a series of redundant coils in the center,” says Olson. “You can delete several of those coils and still retain function.”

To improve Duchenne patients’ prognoses, then, researchers can provide them with smaller versions of the dystrophin protein. One promising approach is to scale down gene therapy so that the DNA encoding a functional, pared-down protein can fit into a viral vector. A recent trial testing the implantation of such a “microdystrophin” showed that the therapy increased levels of the small protein in muscles and reduced levels of a Duchenne-associated enzyme, called creatine kinase, in three patients. The results are promising, although it’s still too early to know what their clinical significance will be. “There are a number of these types of trials that are ongoing that look really exciting,” says Gersbach.

Alternatively, researchers can omit mutated exons to avoid the premature termination of translation. A few biotech companies have been testing antisense oligonucleotides to enact an “exon-skipping” strategy, obviating the need to edit the genome. The antisense oligonucleotides bind to the mRNA produced from mutated exons and cause them to be skipped during translation, restoring the transcript’s reading frame to produce a smaller but functional protein. The US Food and Drug Administration (FDA) recently approved a drug, Sarepta Therapeutics’s eteplirsen (Exondys 51), that uses antisense oligos to skip exon 51.

But the drug would only work on 13 percent of Duchenne patients—those with mutations in that exon—and so far the clinical benefits appear relatively modest. The drug is also expected to cost about $300,000 a year. In addition, the effects of the antisense oligos are transient, and patients will need regular injections to maintain the exon skipping. “There’s a real need for a long-term therapy that can go at the cause of this disease, which is the genetic mutation,” Olson says.

That’s where CRISPR-based genome editing may be able to help. Independent studies by Olson, Gersbach, and Wagers initially used a double-cut strategy—cutting on each side of an exon to excise it from the genome and glue the cut ends back together using NHEJ. But Olson recently developed an approach that uses a single cut to skip, rather than excise, a defective exon, bringing the protein back in frame. He used CRISPR-initiated NHEJ to alter a genomic region before the defective exon, causing the exon to be skipped during later splicing of the mRNA. “We spent a lot of time trying to conceive of the simplest possible approach to modify the genome to correct it, and that led us to single-cut CRISPR,” he says.

I think it’s not unreasonable to imagine that we could get into patients in a few years.

Olson and Long used the single-cut strategy to skip exon 51 in a mouse model of Duchenne and restore up to 90 percent of dystrophin protein expression in skeletal muscles and the heart.5 But again, translating this to humans would only affect about 13 percent of boys with Duchenne. To test a strategy that could rescue dystrophin function in a majority of patients, the researchers simultaneously targeted the top 12 exons that are “hotspots” for DMD mutations. By making a single cut before each of these exons, the team restored dystrophin protein expression in heart muscle cells, or cardiomyocytes, derived from patient stem cells.6 “We found, quite amazingly, that with CRISPR-edited cardiomyocytes the force of [heart muscle] contractions really recovered after the genome editing,” says Long.

Skipping multiple exons in the dystrophin gene—in particular, those with the highest rates of Duchenne-causing mutations—will be key to developing a broadly applicable therapy, says Olson, who says he believes his team is getting close. “There are more than 4,000 mutations that have been identified in Duchenne patients worldwide, so one of the huge challenges has been to devise a strategy that would allow you to consolidate large numbers of patients with different mutations and correct them with a common method,” he says. “We believe we can, in principle, correct somewhere between 60 and 80 percent of Duchenne mutations using this single-cut gene-editing strategy.”

From pipette to patient

If all goes well, researchers will soon test Duchenne gene editing in nonhuman primates, and then in human patients. Gersbach is collaborating with Sarepta Therapeutics to develop CRISPR gene editing for boys with the condition, while Olson’s work has led to the creation of Exonics Therapeutics, a biotech focused on designing gene editing therapies for Duchenne and other neuromuscular diseases. Last week, Olson and colleagues published a study in which they used AAV9 to deliver CRISPR to the muscles or blood of beagles with a naturally occurring DMD-like mutation. After treatment, biopsies of the dogs’ skeletal and heart muscles revealed increased dystrophin expression and improved integrity when viewed under a microscope.

But the biggest challenge is likely to be getting the therapy into patients, says Long. Treating Duchenne requires correcting both skeletal muscle—to restore mobility—and cardiac muscle, to prevent heart failure. This will require systemic delivery of any therapy through the blood. That’s worked so far in mice, but it remains to be seen how well it will work in humans. “Delivery into patients is a huge, huge challenge,” Long says.

The hope is that technologies devel­oped for Duchenne can be applied for other myopathies.

Despite the long road ahead, these cutting-edge Duchenne therapies have advanced at a blistering pace over the past few years, and the future looks bright. “There’s no question that there will be challenges coming, but I’ve never been more optimistic about something,” says Olson. “I think it’s not unreasonable to imagine that we could get into patients in a few years.”

And Duchenne could be just the beginning. There are hundreds of incurable muscle and heart disorders that are caused by mutations in a single gene. “Duchenne is the obvious test bed,” says Gersbach, “but the hope is that technologies developed for Duchenne can be applied for other myopathies.”

Update: Since the print publication of this article, Eric Olson of the University of Texas Southwestern Medical Center and colleagues published a study testing their CRISPR-based treatment in dogs. A description of this study has been added to the online version of the story.