This liger cub and other hybrid animals were thought to be biological rarities, but recent studies have revealed cross-species animals are more common than once thought.
ABOVE: FROM © ISTOCK.COM, W1ZZARD

The whale’s teeth were what had caught molecular ecologist Eline Lorenzen’s attention. Of the 18 chompers lining the front of the skull’s mouth, some were twisted, not unlike a narwhal’s tusk. But the 30-year-old specimen, hidden away in the basement of the Natural History Museum of Denmark at the University of Copenhagen, didn’t have a tusk at all. When Lorenzen became director of the museum in 2015, she decided to examine the skull more closely. Working with a team of collaborators, she extracted genetic material and compared it with DNA from the teeth of narwhal and beluga specimens in the museum. The skull, it turned out, was the first-ever confirmed narluga, the son of a beluga dad...

A deeper dive into the history of the skull (it had been found fixed atop a hunter’s home) revealed that this animal may not have been the only one of its kind. The hunter said he’d seen it with two other similar-looking whale creatures, and he, apparently, isn’t the only one to have seen a narluga. In fact, they are common enough that natives of western Greenland have a word for the narwhal-beluga hybrid, itorsaq.

Because several narlugas have been spotted before, researchers suspect that the creatures may be fertile, and that some narlugas may be the product of two narluga parents rather than one beluga and one narwhal. That notion challenges naturalists’ traditional view of hybrids as the result of maladaptive crossings, such as when a female horse mates with a male donkey and gives birth to a sterile mule. If the hybrids can’t reproduce, they would seem to be irrelevant evolutionarily, but studies of the narluga and other naturally occurring hybrids have begun to hint that such offspring may not be the biological misfits they were once thought to be. They are not evolutionary dead-ends, and in some cases, may serve as evolutionary accelerators.

“We’re beginning to realize that hybridization exists in the evolutionary history of many organisms we didn’t expect it to, including Homo sapiens,” Scott Taylor, an evolutionary ecologist at the University of Colorado Boulder, tells The Scientist.

Hybridization’s benefits are not a new idea

As far back as the 1930s, botanists realized that hybridization plays a role in the evolution of plant species. In 1938, Edgar Anderson and Leslie Hubricht laid out the idea of introgression to describe the hybridization of species of herbaceous perennial wildflowers of the Tradescantia genus. The crosses led to offspring with an even split of parental genetic material, and typically those offspring then repeatedly bred with one of the original parent species, while still retaining genetic material from the other parent species. Alternatively, hybrids bred with other hybrids, and, eventually, entirely new plant species would emerge.

Zoologists knew about these and other examples of hybridization in the plant world, but there was a perception, Taylor says, that cross-species breeding was much less common in animals. That idea stemmed from biologist Ernst Mayr’s description in the 1940s of the biological characteristics that defined species—essentially, any animal population that could not or did not breed with other, similar populations. For more than two decades, including in his 1963 book Animal Species and Evolution, Mayr argued that “the evolutionary importance of hybridization seems small in the better-known groups of animals.” But the idea is not universally accepted, Taylor says. “I don’t know a lot of evolutionary biologists who study hybridization who adhere strictly to that concept.”

Despite the dogma that hybrid animals in nature were rare and therefore not catalysts of evolutionary innovation, some biologists continued to study them, curious to uncover the barriers that prevented them from becoming new species, identify the new gene combinations created by hybridization, and understand how natural selection acted upon them. Focusing on animals in what scientists call hybrid zones—geographical regions in which two species interbreed to produce offspring of mixed ancestry—researchers in the late 1980s and early 1990s began to show that, contrary to the prevailing viewpoint, hybridization was a valid mechanism of evolutionary change—one that could radically influence an animal’s ability to adapt to its environment.

The thousands of cichlids in Africa’s lakes

Evidence for hybrid-driven adaptation is perhaps nowhere more profound than in the warm, tropical waters of Lake Victoria in Africa. There, more than 500 species of bony fishes called cichlids that sport brilliant orange, yellow, and blue hues, roam the lake’s 2,400 cubic kilometers. Some species eat only plants, others eat invertebrates, the bigger species eat other fish, and still more feed on Lake Victoria’s detritus. “There’s incredible diversity of species that live together in the same ecosystem,” evolutionary ecologist Ole Seehausen of the University of Bern tells The Scientist. “This struck me as a beautiful system, the interaction between ecology and evolution . . . to study speciation.”

When Seehausen began to study the lake’s cichlids roughly 30 years ago, it wasn’t clear how the hundreds of species there had evolved. They weren’t geographically isolated, a common driver of speciation. Rather, the fish were all living in the same lake and could interact, yet there was still incredible cichlid diversity. Something else appeared to be driving their speciation.

With continued observation, Seehausen and others found that the barriers preventing the species in the lakes from mating were rather “shallow,” with some of the major ones being behavioral in nature. Males, for example, were defending their territories from males of both the same and other species, or females were choosing flashing mates of only their own species. That last barrier, based on color signaling, began to break down, Seehausen says, when the clarity of the water diminished in the 1990s, a result of wastewater from farms and other human activities polluting the lake. “It turns out that when you change the visual signaling, and the perception of those signals, then not much more is needed to break down reproductive isolation, so many species then hybridize,” Seehausen says.

Something similar appears to have happened thousands of years ago in Lake Victoria. Genetic analyses of the cichlids have revealed that their vast diversity can be traced back to a hybridization of two divergent lineages around 150,000 years ago. And Lake Victoria wasn’t the only body of water in the region where hybridization appeared to play an important role in speciation. Further investigation revealed that cross-species mating had happened and continued to occur in nearby lakes, where it was driving cichlid diversity. “This was replicated in several different lakes across Africa,” Seehausen says.

As scientists began to look for other examples of hybridization in the wild, both past and present, they were not disappointed. Genetic analyses have revealed crosses between coyotes and gray wolves, polar bears and brown bears, chimpanzees and bonobos, finches in the Galapagos Islands, fish called sculpin, and even modern humans and Neanderthals.

Researchers suspect that hybridization events are perhaps becoming more common, as human disturbances shift species ranges in ways that promote breeding across similar species. In Colorado, for example, two varieties of small, nonmigratory birds—black-capped chickadees and mountain chickadees—have recently hybridized in areas being heavily developed by humans. “If you look at the map and squint, the places they’re hybridizing seems to correlate nicely with places that humans have modified, whether that’s the front range of the Rocky Mountains or Albuquerque, New Mexico,” he says. His team hypothesizes that the species, which split some 1.5 million years ago, breed with each other in modified habitats because a resource needed by both, either breeding grounds or certain food sources, is bringing the birds together.

On occasion, a mountain chickadee (above) may mate with a black-capped chickadee.
Robert Taylor

Climate change may also be driving hybridization between species. Evolutionary biologists have seen pulses of cross-breeding as species shift where they live to higher or lower latitudes or altitudes to find cooler temperatures. When they move into those regions, the barriers to hybridization, such as differences in mate choice or other factors, might disappear. “There are definitely compelling examples” of climate change or environmental shifts influencing hybridization, says Molly Schumer, an evolutionary biologist at Stanford University, “and my suspicion is it’s pretty widespread.”

Obviously not all cases of hybridization involved the equal swapping of genes to form a completely new creature, as appeared to often happen with the cichlids, but in just the last few years, “the consensus has been that hybridization in animals in particular is hugely widespread and much more common than was appreciated,” Schumer says. The question in the field now, she says, is if this gene swapping is common, “what is it doing?”

In the case of cichlid hybrids, Seehausen found that not only did the hybrids have similar developmental and reproductive rates to non-hybrids, in some ways individuals with a genetic mishmash of two distinct species created were actually more suited to a particular environment or food source than their parents were.

A few years ago, Joana Meier, an evolutionary genomicist at the University of Cambridge who did her graduate work and a postdoctoral stint with Seehausen, delved into the genetics of the cichlids and spotted one type of hybrid that caught her attention: dwarf species that combine the body shape of a plant-eating species with the predatory habits of a bigger species that dines on other fish. “Genetically, they’re like a mix of both,” she says. “In some cases, they have higher fitness [than either parent species] in different ecological niches.” Seehausen has also shown this in the lab, creating hybrids that don’t thrive on the food the parent species ate, but gobble down a new type of food and begin to flourish.

Schumer is seeing something similar in the hybridization of two related species of swordtail fish, Xiphophorus malinche and X. birchmanni. The fish live in the rivers of the Mexican state of Hidalgo and have begun hybridizing within the last 50 to 100 generations, probably as a result of some human disturbance to the river, she explains. The fish rely on their sense of smell and the signals in those scents to choose mates, but the contaminants in the rivers appear to be blocking the fish from picking out their own species, Schumer says, so they’ve ended up mating across species boundaries. It turns out, that the mix-up could be helping both species survive by boosting genetic diversity. 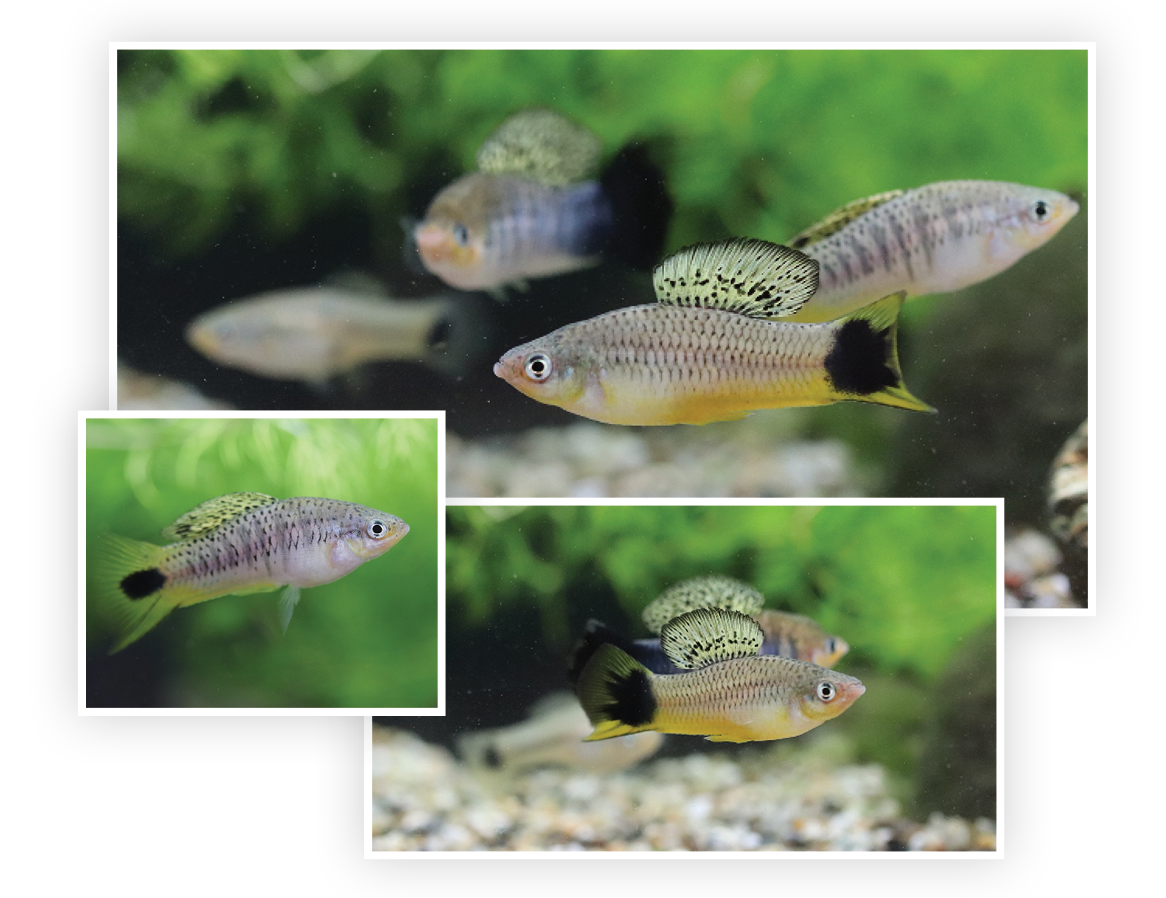 Swordtail cross-breeding is “really, really recent and gives us a good snapshot to [see] what’s happening right after hybridization,” Schumer says. Her genetic studies, along with those from other researchers investigating recent hybridization events, seem to show that right after these crosses occur, the genome of the hybrid undergoes incredible reorganization. “There’s a lot of purging of deleterious alleles and rapid evolution happening right after you collide these two divergent genomes.” The original swordtail parent species are closely related, differing by only 0.5 percent in their genetic makeup, Schumer’s studies show. Still, that small bit of genetic variation leads to substantial shifts in the species’ tolerances to cold, adaptation to elevation, and even an extra-long fin extension, called the sword, seen on X. birchmanni but not on X. malinche.

On the flip side, mushing together the two swordtail species’ genomes can cause issues in the offspring, with many not being able to reproduce. The combination of genes can even cause the hybrids to develop tumorous melanoma, which the parents don’t. “One of the biggest questions in the field,” Schumer says, “is: In this really rapid genome evolution happening after hybridization, how are all of these mechanisms—positive effects of hybridization, negative effects of hybridization, interactions with the environment, social interactions—playing out?”