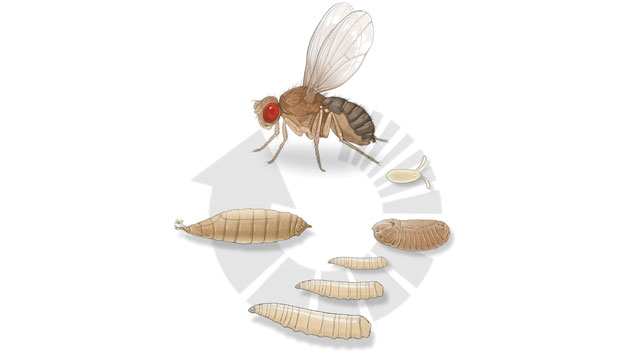 © CATHERINE DELPHIAWhy is your right arm as long as your left? How does your heart grow just big enough to fit inside your chest, and not larger? Why is your head “smaller” in proportion to your body size now than when you were a baby? The question of how animal growth and size are regulated and coordinated has fascinated generations of biologists. However, the underlying mechanisms still remain unclear. In recent years, the power and versatility of Drosophila genetics, combined with some imaginative experiments by fruit fly researchers, have revealed new ideas about the control of animal growth. In particular, several recent reports using this model system have shown how organ-to-organ signaling can influence both the rate of Drosophila body growth and final organ size. These findings may provide clues about human growth as well.

As they develop, Drosophila progress through three main stages—embryo, larva, and pupa—before... 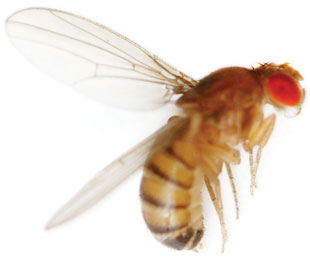 © MARTIN SHIELDS/SCIENCE SOURCEA large part of this nutrient-dependent increase in size is due to an increase in cell size of organs such as muscle, fat, epidermis, and gut. Nestled among these tissues are imaginal discs containing precursor cells that eventually contribute to adult structures, including the wings, legs, eyes, thorax, and antennae. Communication between these various larval tissues is emerging as an important regulator of overall growth rate and larval body size and ensures that the growth of each organ is proportional to the rest.

Although humans lack imaginal discs, limb and organ development occur in a similarly coordinated manner. However, the signaling systems are much more difficult, if not ethically impossible, to dissect in humans. Drosophila provides the perfect system to study the crosstalk between developing organs in the overall control of tissue and body size.

At least two key endocrine systems are known to coordinate growth and development in the fruit fly: Drosophila insulin-like peptides, known as dILPs, and ecdysone, a steroid hormone that triggers molting. Drosophila have eight different insulin-like peptides expressed in different temporal and spatial patterns throughout larval and pupal development. Under nutrient-rich conditions, discrete secretory cells within the brain express and release a subset of these peptides, which then circulate throughout the hemolymph, the fly’s version of blood. The peptides trigger growth in target tissues by binding to cell-surface insulin receptors and activating a conserved intracellular pathway that results in cell and tissue growth. The human equivalent of the dILPs are insulin-like growth factors (IGFs), which regulate similar functions to those in the fly. Defects in IGFs and their downstream intracellular signaling pathways lead to growth disorders in humans such as gigantism, dwarfism, and benign and malignant tumors. Differences in IGFs may also underlie the profound size differences between different breeds of dog.

Just as human steroid hormones, including testosterone and estrogen, control progression through developmental phases such as puberty, pulses of the fly steroid ecdysone, released from glands below the insect’s head, are responsible for driving transitions in the larva, such as the onset of the next developmental stage—pupation. As with the insulin-like peptides, ecdysone production is controlled by dietary nutrients.1 Under nutrient-rich conditions, pulses of ecdysone are produced and larval development proceeds rapidly. However, when nutrients are in short supply, ecdysone production is reduced and development is delayed.

Together, the Drosophila insulin-like peptides and ecdysone regulate body size by controlling both the rate and the duration of larval growth. Recent studies have begun to uncover the intricate communication between organs that underlie this control.

From fat to brain

The larval fat body, an opaque sheet of tissue that runs the length of the larva, is a key nutrient-sensing organ that acts to buffer fluctuating nutrient conditions and the energy demands of the developing internal organs. For example, when larvae are deprived of dietary protein, fat cells begin to degrade their own organelles via autophagy in order to provide a source of amino acids for protein synthesis, necessary for survival. Fat cells also alter their lipid metabolism—changes that are essential for remobilizing scarce nutrients.

Communication between various larval tissues is emerging as an important regulator of overall growth rate and larval body size and ensures that the growth of each organ is proportional to the rest.

The fat body also functions as an important endocrine organ that can signal the developing fly’s nutritional status to remote tissues. Over the last decade, a series of elegant studies from the laboratory of Pierre Léopold at the Institute of Biology Valrose in Nice, France, have shown that in a fly larva, when dietary protein levels are high, the fat body detects free amino acids and activates the protein kinase called target of rapamycin (TOR) within the fat cells.2,3

In all eukaryotes, availability of extracellular nutrients, such as amino acids and sugars, can activate the highly conserved TOR pathway, which triggers metabolic changes that promote the growth and proliferation of that cell. In Drosophila larvae, however, TOR’s activation in fat cells also causes the release of insulin-like peptides 2, 3, and 5 from neurosecretory cells in the brain. However, researchers have not yet found the signal that connects the intracellular activation of TOR in the fat cells with the hormone release in the brain.2,3

Norbert Perrimon and Akhila Rajan of Harvard Medical School recently found one candidate cytokine in the fly that may serve the role of a fat-to-brain messenger. Called UPD2, the cytokine is released by the fat body and can travel to the brain to mediate the release of insulin-like peptides. It’s still unclear whether this signal is responsible for the effects of TOR.4 Interestingly, UPD2 is similar to the human hormone leptin, which is released from fat cells and controls metabolic rate and the desire to eat. 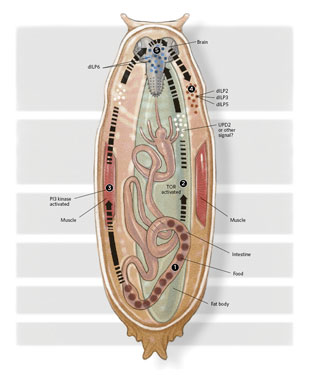 ALL IN PROPORTION
View full size JPG | PDF© CATHERINE DELPHIANot only do insulin-like peptides spur growth throughout the body, these hormones can also act locally on the brain tissue itself. The labs of Alex Gould, at the Medical Research Council National Institute for Medical Research, and Andrea Brand, at the Gurdon Institute, independently published reports showing that insulin-like peptides regulate stem cell proliferation in the brain.5,6 After a fly egg hatches and the larva begins to feed, neural stem cells in the brain start proliferating. The stem cells are essential for normal brain development and also respond to signals from the fat body. The Gould and Brand labs showed that this effect was mediated by TOR activation in fat cells, which stimulated the release of Drosophila insulin-like peptide 6 from glial cells in the brain. This peptide acts locally to trigger neural stem cell proliferation via an insulin receptor/PI3 kinase signaling pathway.

Recent work from the Perrimon lab has also shown a remote signaling function for muscle.7 They found a nutrient-dependent intracellular pathway involving the PI3 kinase leading to the activation of TOR was required to control growth and development of larval wall muscle. Interestingly, if they inhibited PI3 kinase in these developing larval muscles, they also saw growth suppression in other tissues, probably via effects on larval feeding behavior, resulting in an overall stunted body size. Likewise, increasing PI3 kinase signaling only in the muscle caused other tissues to increase their growth, most likely via the release of an unknown messenger signal. Whether these effects require the secretion of a discrete muscle-derived signaling factor that interacts directly with other organs, or whether this system also relies on systemic Drosophila insulin-like peptide signaling, is unclear.

Imaginal discs are clusters of cells symmetrically located in specific segments along the axis of the developing fly that divide during the larval period and, during the pupal stage, replace the larval cells, eventually growing into all of the adult organs and structures, such as the eyes, wings, legs and thorax, prior to emergence. (See diagram here.) Damage to the discs results in cell death and growth arrest, followed by a period of compensatory proliferation and growth to allow for regeneration of the damaged tissue. Importantly, developing Drosophila larvae are able to sense this damage and stall larval development, slowing the growth of other tissues while the regeneration occurs. Earlier studies have shown that this coordination involved changes in ecdysone signaling. This phenomenon provides an example of coordination of growth between organs to ensure proper body size and proportion. 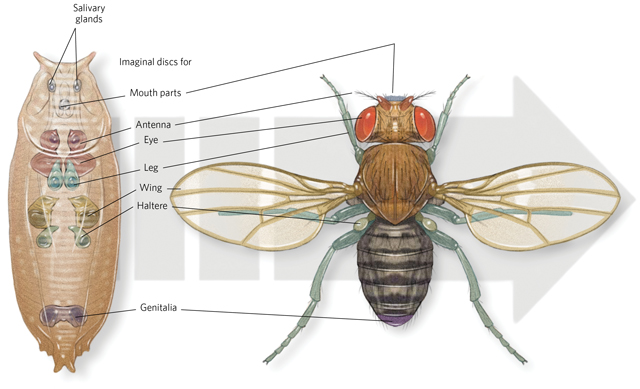 IMAGINAL DISC COORDINATION: Imaginal discs in the Drosophila larva are tissues that will eventually become the organs and extremities of the adult fly. When one disc is damaged, a signal is released that halts the growth of the other discs until the damaged disc can be repaired, thus ensuring each adult organ grows in proportion to the others. Recent work has identified the signal responsible for this communication as the eighth Drosophila insulin-like peptide, dILP8. This peptide controls the release of ecdysone, a fly growth hormone that also triggers molting.© CATHERINE DELPHIA

Recently published work has shed light on mechanisms underlying this coordination, elucidating the signal sent from the imaginal discs to both stall and resume growth.8,9 Two papers published in the same issue of Science in May 2012 identified the eighth Drosophila insulin-like peptide as the factor secreted from damaged discs that controls the release of ecdysone. One theme that emerges from studies of physiology and size control in flies is that the insulin-like peptides are the key endocrine factors that determine overall tissue and body growth. These two papers make an important contribution by identifying another insulin-like peptide that plays a role in ensuring the coordination of growth between organs.

Sizing up the issue

Two other recent papers identified commensal gut bacteria as essential components of the control systems that govern body development and growth in Drosophila.10,11 In particular, the presence of certain gut bacteria appeared to augment the organ-to-organ signaling networks that promote Drosophila insulin-like peptide and ecdysone release. These findings suggest the intriguing notion that gut bacteria act as another “organ” that can signal larval tissues to promote both organismal growth and development, but again, what underlies this signaling is unclear.

Recent findings suggest the intriguing notion that gut bacteria act as another “organ” that can signal larval tissues to promote both organismal growth and development.

The last year or so has seen a flurry of reports on the control of growth and body size in Drosophila. A central theme to these papers is the idea of signaling between organs as a control mechanism for overall body growth and development. This concept is obviously not new; decades of research on the growth hormone/IGF axis in mammals have emphasized the role of endocrine factors in body growth. But these fly studies now open up the possibility of using a genetically tractable system to dissect, in detail, how organ-to-organ communication dictates body size and proportions.

For example, one obvious question that these papers leave unanswered concerns the nature of the relevant organ-to-organ signaling molecules. Undoubtedly, the versatility and sophistication of Drosophila genetics, and in particular the ability to perform targeted, tissue-specific loss-of-function RNAi screens, will spur researchers to identify these elusive factors. Once we do, we may find that they are conserved, and even that their homologs play similar endocrine roles in other animals. Certainly, insulin-like peptides present a strong precedent for conserved organ-to-organ signaling networks that control body growth and size. Nevertheless, even if the factors are not conserved, the principle of organ-to-organ signaling and physiology as governing mechanisms for body size control will surely prove to be central to animal development. And no doubt Drosophila research will continue to lead the way in unraveling these mechanisms.

Savraj S. Grewal is at the Clark H. Smith Brain Tumour Centre, at the University of Calgary, Alberta.