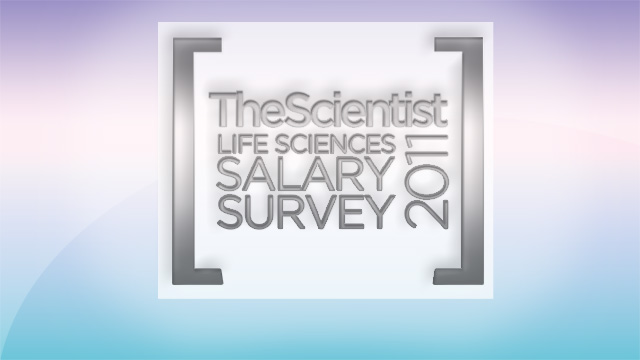 Last year the recession hit paychecks as well as jobs, with overall salaries in the life sciences showing the first decrease over a previous year since The Scientist began the survey in 2001. But this year things are moving back up, with a $6,000 increase in median salaries over 2010, bringing total earnings (salaries plus fees, bonuses, and profit sharing) almost back to the 2009 median of $90,000. Thus, despite the starker grant-funding reality for scientists the world over, salaries, at least, are starting to recover. Indeed, the moderate increase in salaries is seen across many disciplines in this year’s data. The highest salaries are found in areas under the most pressure to improve the public’s safety and standard of living. This translates to a focus on specialties such as virology and immunology (infectious disease and autoimmune disorders), genomics (personalized medicine), developmental biology (stem cell research for regenerating damaged...

As the funding landscape continues to change, with higher salaries and more job offers coming from industry than ever before, researchers looking to earn more will have to think hard about how their skills fit with the demands of the times. Many more scientists may find themselves considering a shift to industry and government positions, which offer higher pay.

According to the National Science Foundation’s 2010 Science and Engineering Indicators, the public dollars allotted to research and development have not increased since 2004. However, 60 percent of all R&D expenditures go toward life science research, and the rate of job growth in that sector continues to be higher than that of the overall workforce (as of 2007, the most recent year the data were collected).

Salaries in the life sciences vary widely across disciplines, and generally reflect the level of interest and investment in a particular field. This year’s big winners include biophysics, virology, cancer/oncology, genomics, neuroscience, developmental biology, and immunology. These fields largely encompass those a­reas of research valued by the aging baby-boomer population, says Alan Edwards, a product leader for Kelly Scientific Resources.

“Neuroscience translates to [the idea that] we are looking for clarity of mind,” he says. Cancer/oncology, genomics, and immunology also hit on ailments that affect aging populations, as researchers attempt to identify biomarkers for early disease detection and effective treatments. And in biophysics, he adds, researchers are looking for ways to help the elderly maintain mobility and independence in their lives. “The three things that everybody’s looking for as they age are their health and well-­being, mobility, and clarity of mind,” Edwards says. “That fits with where the research dollars are going and where there’s the highest earning potential.”

Experience vs. Level of Responsibility

The 2011 Salary Survey data reflect the not-unexpected correlation of higher compensation with increasing experience and increasing amount of responsibility. “There is a high degree of reward for continuing to be present in the workforce,” Edwards says. This has encouraged many aging scientists to postpone retirement in order to make up for money lost during the series of economic recessions starting in the late 1990s. During those periods, Edwards says, a lot of 401(k)s dropped in value. “Then we also had real-estate values drop—the bottom just fell out,” he adds. “The retirable equity has diminished considerably, meaning people have to work more years to maintain the lifestyle that they have.”

That said, people are also motivated by a desire to remain productive, Edwards says. “Money isn’t the No. 1 thing. It’s the degree to which they can give back and provide some importance in the world.”

Jobs by Region and Employer Type

Minnesota, with high industry salaries for the Midwest, is known for its development of medical devices—an industry that is growing thanks to the increased emphasis on the aging population, and in particular, on mobility research. “You’ve got implantable devices—knee implants, joint implants—to give people their mobility,” Edwards says. Also evident in these data is a trend The Scientist sees year after year: variation in salaries between academic institutions, nonacademic research organizations, and industry. “Clearly, it’s more rewarding from a financial perspective to be in industry than it is to be in academia,” Edwards says. While this has long been true, the trend may be even more exaggerated now, as “that is where the jobs are—in industry, not academia.” It’s also where more and more of the money is coming from, according to Patrick C­lemins, Director of the R&D Budget and Policy Program at the American Association for the Advancement of Science: more than 65 percent of US R&D funding came from industry in 2008, compared to just 50 percent in 1988. (See “A Quarter Century of Fueling Science,” The Scientist, October 2011.)

The US hot spots for biotech and pharma are the San Francisco Bay area, Boston, San Diego, New York/New Jersey/Pennsylvania (also known as the tri-state area or the Pharmaceutical Corridor), and the Raleigh/Durham/Chapel Hill Research Triangle, Edwards says. And salaries reflect both the higher competition for researchers in those areas and the generally higher cost of living.

One clear trend in this year’s data is the persistence of the gender gap—in the life sciences men still make, on average, more than women in comparable positions. But Edwards notes that the difference is smaller than it once was, and he expects it to continue to compress. “The gap is closing,” he says. Before long, “the skill reward, as opposed to the gender reward, is going to be dominant.”

One notable figure on this chart is the exceptionally low salaries of women with MD/PhD degrees. But Edwards suspects this is simply “an aberration,” most likely a result of the small sample size in this category. What’s more important to take from these data is the value of all levels of education. “In the workforce, you’re going to need PhDs and you’re going to need lab techs,” Edwards says. And from a business perspective, companies may often value the lower levels of education more. “The quality of the education is higher, and therefore we’re producing more skilled graduates. You will get more output for [a given] education level than you would have in the past,” adds Edwards.