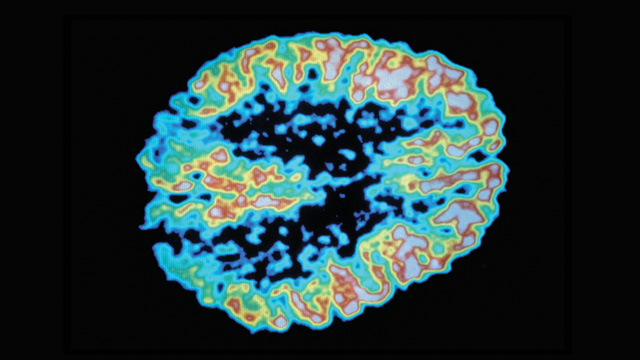 Historically, insulin-shock therapy, also known as insulin coma therapy (ICT), was a form of psychiatric treatment in which patients were injected daily for several weeks or even months with a large dose of insulin in order to induce a coma. After about an hour in the coma, the treatment was ended by the administration of glucose. Originally introduced in 1933 by Austrian-American psychiatrist Manfred Sakel, the method was soon adopted by other psychiatrists in the United States and Europe. ICT was used extensively in the 1940s and ’50s to mitigate psychotic and affective symptoms, primarily in patients with schizophrenia. But the induced hypoglycemia, or pathologically low blood-glucose level, that resulted from ICT made patients extremely restless, sweaty, and, after long courses of treatment, even grossly obese. ICT was also associated with death and brain damage, and there was no scientific explanation for ICT’s often successful...

Neuropsychiatric disorders are debilitating conditions associated with inexplicable mood shifts, delusions and dementia, and even premature mortality. Disease modeling of these disorders implicates the role of abnormal cellular structure and function, resulting in disturbances in synaptic signaling and in entire neural circuits. Research underscores the role of genetic, epigenetic, and environmental pathogenic influences. However, the specific mechanisms underlying most neurological and psychiatric disorders have yet to be elucidated.

An intimate link exists between the brain and the metabolism of sugar—one that has too long been overlooked by the fields of neuroscience and psychiatry.

One idea that is gaining steam is a role for metabolism. Neuropsychiatric disorders often co-occur with metabolic disturbances, such as insulin resistance, diabetes, and obesity.1 And as ICT records illustrate, manipulating patients’ metabolism via injections of insulin can have striking effects on their mental state. Furthermore, researchers have documented roles for insulin, a pleiotropic peptide traditionally discussed in terms of metabolic disorders like diabetes and obesity, in neuron growth, neuroplasticity, and neuromodulation. Moreover, insulin appears to be important in the development of several neuropsychiatric disorders, including neurodegenerative diseases such as Alzheimer’s. (See Table below.) Stress and neuroinflammation are two physiological conditions affected by insulin-mediated signaling that have both metabolic and neurologic consequences, possibly explaining the co-occurrence of the two types of disorders. Taking into account such metabolic disturbances when refining disease models for neuropsychiatric disorders is an essential step in the development of preventive treatments, and targeting insulin-related pathways in the brain could lead to new approaches for treating neurological and psychiatric disorders.

The association between disruptions in glucose metabolism and psychiatric disorders was first documented more than 3 centuries ago by the English doctor Thomas Willis. He noted that persons who had experienced stressful life events, depression, or “long sorrow,” often suffered from diabetes. Years later, in 1897, British psychiatrist Henry Maudsley observed that diabetes and insanity are often co-expressed in families, and in 1935, American psychiatrist William Claire Menninger postulated the existence of psychogenic diabetes and described a “diabetic personality.” More recently, researchers suggested that enhancing glucose metabolism and related insulin-signaling pathways in the brain improved functional activity of patients with schizophrenia.

The connection between metabolic disturbances and neuropsychiatric disorders has been strengthened by recent and ongoing human clinical studies, which document numerous and complex interactions between metabolism and the brain. For example, individuals with depression have an approximately 60 percent higher risk of developing type 2 diabetes. Conversely, individuals with diabetes are at an elevated risk of developing depression. Metabolic disturbances are also reported to be two to four times higher in people with schizophrenia, and patients prescribed psychotropic medications, such as antipsychotics and antidepressants, often experience disturbances in metabolic parameters, including high blood sugar, impaired glucose tolerance, and type 2 diabetes.

Metabolic disturbances have also been implicated in neurodegenerative disorders, including Alzheimer’s, Huntington’s, and Parkinson’s diseases. Multiple clinical observations have demonstrated that dementia in general, and Alzheimer’s disease in particular, are associated with type 2 diabetes and obesity. Moreover, type 2 diabetes is considered an independent risk factor for dementia, with the prevalence of dementia in diabetic populations double that of healthy patient populations. Other clinical observations have shown that prevalence rates for type 2 diabetes and insulin abnormalities are approximately 7-fold higher in patients with Huntington’s disease when compared to healthy controls, and impaired glucose tolerance affects up to 80 percent of Parkinson’s patients.

Taken together, clinical studies have provided ample evidence supporting an overlap between metabolic disturbances and neuropsychiatric disorders. The question now is: What links the two? The data suggest that an imbalance in brain function and metabolic status share underlying pathophysiological mechanisms and common intracellular signaling molecules. If true, targeting these underlying pathways could serve as novel therapies for both types of disorders.

Insulin in the brain

A notable signaling pathway that affects both neuropsychiatric and metabolic processes is one mediated by insulin, the main hormone traditionally discussed in the context of  blood-glucose regulation. Dysregulation of insulin’s intracellular effects has been implicated in the pathogenesis of both metabolic and neuropsychiatric disorders. (See illustration below.)
The brain is a particularly energy-intensive organ; approximately 25 percent of total body glucose utilization is required for proper brain function. But despite this high need for glucose, the brain has traditionally been viewed as functioning independently of insulin. This view, however, has recently been challenged. 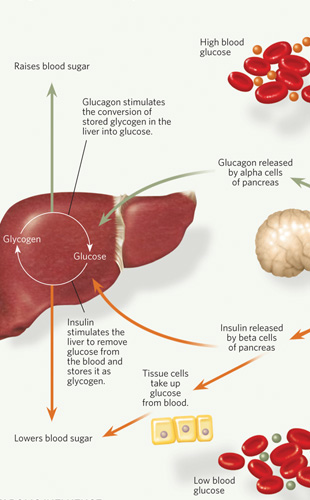 In addition, insulin plays an important role in dopamine-mediated reward circuits, which are involved in the motivating, rewarding, and reinforcing properties of food. Studies in human subjects have identified an imbalance in several neuronal circuits of obese patients, affecting aspects of reward saliency, motivation, and learning. A novel hypothesis postulates that obesity is a consequence of addictive food behaviors.6 Indeed, obesity is characterized by deficits in the striatal dopamine 2 receptor (D2R). And new evidence suggests that insulin-mediated signaling components may play a key part in regulating that addiction.

Injection of insulin into the brains of rodents, for example, increases the amount and activity of dopamine transporters in the substantia nigra, a midbrain structure involved in reward, addiction, and movement.7 Furthermore, obese and diabetic leptin-deficient mice have low levels of tyrosine hydroxylase, an enzyme involved in dopamine synthesis, in their midbrain dopamine neurons. These mice also release less dopamine into the nucleus accumbens; harbor decreased stores of dopamine in the ventral tegmental area, which is implicated in drug and natural reward circuitry; and show diminished sensitivity to the dopamine-dependent motivational and psychomotor stimulant effects of cocaine and amphetamines. These symptoms can be reversed by treatment of leptin-deficient mice with dopamine receptor agonists, which reduces excessive hunger and obesity and improves insulin sensitivity.

Insulin has come to be known as a neuropeptide critical for neuron growth, neuroplasticity, and neuromodulation.

Insulin and insulin-mediated signaling pathways also play an important role in the regulation of normal emotional and cognitive brain functions. Several studies have shown that insulin may contribute to learning and memory. For example, training for memory tasks in animals causes an upregulation of insulin receptors in the hippocampus. Historically, cognitive impairment has been associated with insulin resistance and type 2 diabetes and was classified as diabetic encephalopathy. To take a more extreme case, obesity has been identified as a risk factor for dementia. Individuals with Alzheimer’s disease have a lower concentration of insulin in their cerebrospinal fluid and a higher concentration in their blood than controls, both of which indicate impaired insulin metabolism in the brain.

Given this intimate link between insulin signaling and brain function, it should be no surprise that insulin treatment in individuals with Alzheimer’s disease has produced beneficial effects on memory performance. The systemic infusion of insulin also improves patients’ verbal memory and selective attention. Intranasal administration of insulin has proven to be another way to facilitate memory, and rodents receiving injections of insulin directly into the brain performed better on memory tasks. However, it is still unclear whether insulin has a direct effect on brain function or whether these changes are a consequence of disturbances in peripheral glucose metabolism.

Insulin-mediated signaling pathways could also influence Alzheimer’s patient outcome by clearing β-amyloid from the brain. Competitively blocking an insulin-degradation enzyme in Alzheimer’s patients also reduced β-amyloid levels. Moreover, insulin treatment lowers the plasma concentrations of the amyloid precursor protein, which has been implicated in the development of Alzheimer’s disease.

Work in mouse models also supports a role for insulin signaling in Alzheimer’s pathogenesis. In a mouse model with a double mutation of this amyloid precursor protein, insulin-like growth factor (IGF-1) has a protective effect against the development of amyloid deposits, but plaque formation increased when mice consumed a high-fat diet and developed insulin resistance. Mouse models with brain-specific deletions of insulin signaling molecules also display increased levels of phosphorylated tau, another protein implicated in Alzheimer’s disease.

Collectively, these data support the notion that Alzheimer’s disease could be conceptualized as a metabolic disease, with progressive impairment of the brain’s capacity to utilize glucose and respond to insulin and IGF-1. Furthermore, the findings suggest that insulin signaling may play a key role in the development of the disease, and that these pathways may serve as viable drug targets to prevent and treat Alzheimer’s-related dementia.

Normal and pathological conditions have an immediate impact on brain functions. Moreover, neurons and glial cells exist in a tight, mutual structure-function relationship that is highly dependent on the peripheral supply of glucose—the cells’ major energy source. Converging evidence indicates that insulin serves several critical roles in the CNS under both normal and abnormal conditions. Insulin receptors are expressed in the brain, affecting a wide range of normal brain functions, such as reward, motivation, cognition, attention, and memory formation, and dysregulation of insulin signaling leads to characteristic signs of neurodegenerative and psychiatric diseases. Thus, pharmacological targeting of insulin-mediated signaling pathways may be beneficial in treating brain disorders.

Furthermore, the totality of evidence suggests that metabolic and neuropsychiatric disorders may share a common pathophysiological nexus. Critical effectors of this association include alterations in whole-body energy metabolism, oxidative stress, inflammation, insulin resistance, and corticosteroid signaling, as well as imbalances in cytokines and adipokines. Investigations that aim to refine the relative contributions of these effector systems, with a particular focus on convergent molecular pathways, may provide the basis for disease-related biomarker discovery, as well as novel treatment approaches for both metabolic and neuropsychiatric conditions. 

Oksana Kaidanovich-Beilin is a postdoctoral fellow in Jim Woodgett’s laboratory at the Samuel Lunenfeld Research Institute at Mount Sinai Hospital in Toronto, Ontario, and an editor of special research topics for Frontiers in Molecular Neuroscience. Danielle S. Cha is an undergraduate student at the University of Toronto in the lab of Roger S. McIntyre. McIntyre is a professor of psychiatry and pharmacology at the University of Toronto and head of the Mood Disorders Psychopharmacology Unit at Toronto Western Hospital, University Health Network.