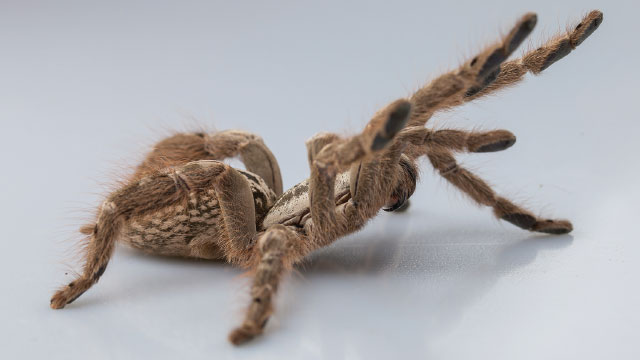 Comprising more than 40,000 species—almost all of which produce venom—spiders are a treasure trove of nerve-attacking molecules. “They’re basically little combinatorial peptide libraries walking around on a bunch of legs,” says David Julius, a physiologist at the University of California, San Francisco. “They’ve had millions of years to evolve peptide sequences that interact with the functionally most important parts of protein targets.”

Those targets are often ion channels in the membranes of pain-sensing neurons. In a recent screen of multiple venoms, Julius’s group identified two toxins from the Togo starburst tarantula (Heteroscodra maculata) that selectively activated the mammalian voltage-gated sodium channel NaV1.1, which behavioral experiments with mice revealed plays a previously unknown role in mechanical pain (Nature, 534:494-99, 2016). The team also characterized one of the toxin’s binding sites, opening a route to developing selective NaV1.1 inhibitors for...

Other toxins inhibit, rather than activate, these channels, providing more-direct inspiration for analgesic drug design. In 2017, a group of researchers in Australia reported that Pn3a—a peptide from the giant blue bloom tarantula (Pamphobeteus nigricolor)—inhibits the pain-associated sodium channel NaV1.7 by binding to its voltage-sensing domains, and is analgesic in rodents when administered with subtherapeutic levels of opioids (Sci Rep, 7:40883). The same group recently identified another NaV1.7 inhibitor, Cd1a, from the African rear-horned baboon spider (Ceratogyrus darlingi).

Spider venoms are “really showing us pathways that we can target,” explains Rash. Then, “we can try and mimic them with molecules that might have more-favorable pharmacokinetic properties, or be easier and cheaper to manufacture.”