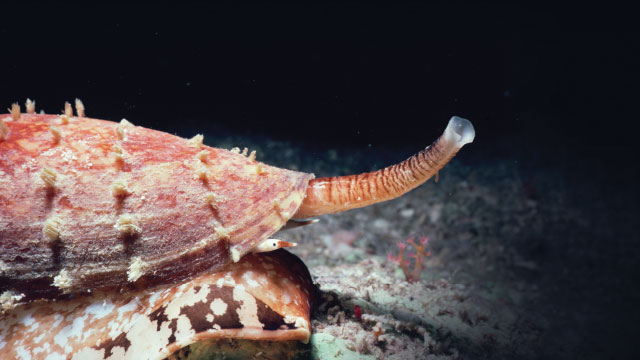 In the 1970s, University of Utah researcher Baldomero Olivera heard stories of Filipino fishermen dying after pulling in their nets. Their catches turned out to contain Conus geographus, a marine mollusk that produces some of the most potent venom of any cone snail species. The ultimate cause of death, then, seemed clear. But the details of how the cone snail toxin had killed the fishermen were more curious. According to medical reports, the men were not writhing in agony as their lives slipped from their grasp, leading researchers and clinicians to dub the tragic outcome a “painless death.”

“They didn’t cry out in pain, they weren’t doubling over, they weren’t getting swollen like you kind of do from a wasp sting or from a snakebite, where you get this massive inflammation,” says Mandë Holford, a biochemist at Hunter College and CUNY Graduate...

These painless deaths led researchers to wonder how cone snail venom was behaving inside the body. “A lot of [insect or snake] venom has acetylcholine in it, which reacts with pain receptors, so you get throbbing pain,” Holford says. “That doesn’t happen with cone snail venoms. Instead, it sort of restricts the diaphragm and the person sometimes dies from a heart attack because they can’t breathe, and that shock of not being able to breathe is what kills them.”

In the 1980s, researchers isolated a novel conotoxin peptide from the venom of a species, Conus magus, related to the fishermen’s killers, and derived a synthetic version of the peptide called ziconotide. Extensive functional studies revealed that ziconotide blocked CaV2.2, or N-type, voltage-gated calcium channels, and so inhibited the release of pain-transmitting chemical messengers, including glutamate and calcitonin gene–related peptide, in the central nervous system. In 2004, the drug, which is 1,000 times more potent than morphine, was approved for sale in the United States by the FDA for the treatment of intractable pain, especially neuropathic pain and pain in cancer patients, under the trade name Prialt.

It is a very expensive treatment, and it’s only for certain types of patients.—Frank Mari,
National Institute of Standards and Technology

But because ziconotide cannot cross the blood-brain barrier, it must be delivered directly into patients’ spinal cords via a surgically implanted pump. “It is a very expensive treatment, and it’s only for certain types of patients” for whom opioids and other painkillers have failed, says Frank Mari, a biochemist at the National Institute of Standards and Technology (NIST) who studies cone snail venoms. “It’s a boutique drug.”

Even though ziconotide didn’t turn out to be a blockbuster pain medication, it did shine a light on a novel pain pathway, says Richard Lewis, a University of Queensland, Australia, molecular pharmacologist and director of the school’s Institute for Molecular Bioscience Centre for Pain Research. “[The drug’s developers] basically showed that a specific calcium channel was analgesic if you blocked it. That was proof of concept for that target.”

Despite years of continued research into conotoxins as potential analgesics and a handful of clinical trials testing promising derivatives, however, no cone snail–inspired drugs other than ziconotide have made it to FDA approval. One reason is safety concerns, as venom peptides are extremely potent; another is the tendency for peptides to degrade quickly in the body. And in at least one case, a mid-course change in targeted indication is to blame, Lewis says.

About a decade ago, Lewis cofounded Xenome, a Brisbane-based biotech, to test a novel conotoxin-derived drug called Xen2174 for the treatment of cancer pain. Xen2174 blocked the reuptake of noradrenalin, a hormone that acts as a neurotransmitter and can be overproduced in some chronic pain cases. But after the FDA decided to reassign the drug to the treatment of post-surgical pain—in part to speed recruitment—Lewis says it failed to produce analgesic effects as promising as those the company had seen in patients with cancer-related pain. “It was disappointing that a promising molecule didn’t survive the change in direction at the clinical trial level.”

But researchers aren’t giving up. Lewis says that cone snails, of which there are believed to be about 750 or 800 species, represent fertile ground for the search for novel analgesics. Each species has its own unique blend of peptides that make up its venom, and he estimates that, so far, “we’re at about 1 percent of knowing the major components.”

Holford’s work, which seeks to get a handle on the chemical diversity of cone snail venom, could inform that search. The research—known as venomics—involves using genomics to assemble phylogenetic trees of known cone snail species. By targeting the venoms of species that are related to cone snails such as C. magus that have already yielded promising conotoxins, Holford says she can streamline the search for newer peptides that may be able to cross the blood-brain barrier or target peripheral pain receptors. “I like to call it ‘from mollusks to medicine’ or ‘from beach to bedside,’” Holford says.