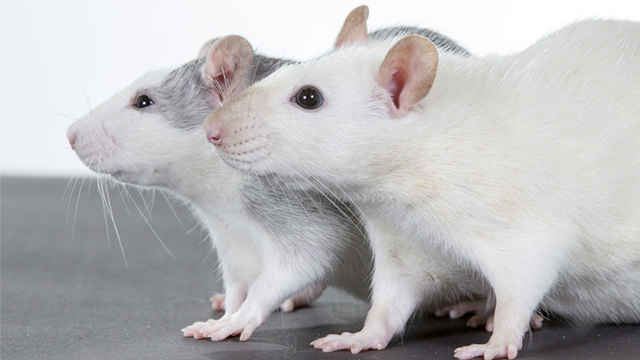 In 1877, Joseph Sidebotham, a Manchester cotton baron fascinated by natural history, published an informal correspondence in Nature describing how a mouse had serenaded him from the top of a woodpile. In the letter, Sidebotham notes that his son suggested that perhaps all mice can sing, but at frequencies that the human ear cannot hear, and that the audible mouse vocalist was an oddity (what today we would call a mutant).

Sidebotham dismissed his son’s idea, but it turned out to be right: mice do sing. In addition to the audible squeaks for which they are known, the rodents produce more-elaborate vocalizations reminiscent of birdsong, but at a frequency far beyond the limits of human hearing. In 2005, Timothy Holy, a neuroscientist at Washington University in St. Louis, and colleagues defined these ultrasonic vocalizations as songs using measures similar to those that researchers employ to...

SILENT SONGS: The ultrasonic calls of rodents are important for mediating social interactions among the animals.FRONT BEHAV NEUROSCI; 10:197, 2016 “There’s acoustic structure to the vocalizations mice emit, and they are used during social interactions,” says Roian Egnor, who studies the neural basis of vocal behavior in mice at the Janelia Research Campus in Virginia. “But,” she adds, “whether it’s music is way above my pay grade.”

The supersonic songs of lab mice are critical for a normal social life. In 1983, Steven Pomerantz, then at Michigan State University, demonstrated that female mice spend more time with males who can sing than devocalized animals. More recent studies have demonstrated that dominant male mice that mate more also sing more, while subordinate males mate and sing less (Front Neurosci, 8:231, 2014). “There’s something that happens when you become a subordinate male that suppresses your ability or interest in singing,” Egnor says. Indeed, male singing behavior in diverse species, including mice, has been linked to testosterone levels, which tend to increase with dominance and decline with subordination.

Beyond the male’s courtship song, female mice appear to use their own repertoire of ultrasonic calls to celebrate reunions with littermates or to settle territorial disputes. So both male and female mice sing in response to females, says Egnor, “but if you put a male with another male, you get no ultrasonic vocalizations at all. They don’t say anything—they just fight.”

Neuroscientists are also beginning to explore the genetic and neurologic components of rodent vocalizations, which could have implications for humans as well, says Terra Barnes, a postdoc at Washington University in St Louis. “At least some of the neurons necessary to make vocalizations involve a neural pathway that is similar between mice and humans.” In 2016, Barnes and colleagues demonstrated that mice develop vocalization problems when engineered to carry a mutation homologous to one responsible for some types of human stuttering (Curr Biol, 26:1009-18).

“We just finished characterizing the vocalizations of the mouse model,” Barnes says. “Now we get to find the neural mechanism, and look for potential therapies.”

Read about the rest of the animal chorus, including birds, bats, amphibians, insects, whales, and fish, in “Song Around the Animal Kingdom.”