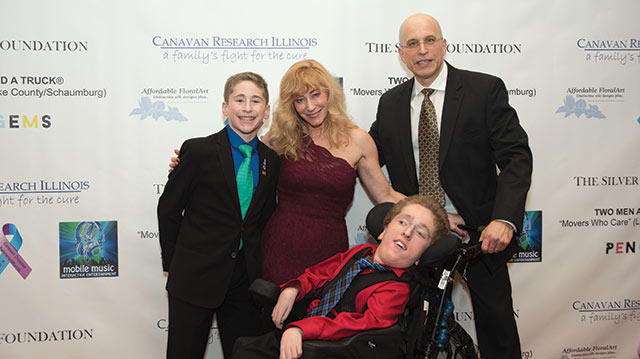 Twenty years ago, Ilyce Randell and her husband received devastating news: their son Maxie, who was a little over four months old at the time, had Canavan disease. Maxie would never walk or talk, and he likely wouldn’t live past age 10. Not much could be done to help their son, the couple was told, though a geneticist offhandedly remarked that researchers were developing a gene therapy that might lessen Maxie’s symptoms or extend his life. But the Randells also learned that there was no funding available for a clinical trial on the gene therapy. Recently married, the couple contacted the same people they had invited to their wedding. Randell wrote a letter describing her son’s illness and included a photo of Maxie grinning. “That was my first...

Canavan disease is caused by mutations to the ASPA gene, which encodes an enzyme, aspartoacylase, that breaks down N-acetyl-L-aspartic acid. Without aspartoacylase, the acid builds up in the brain’s neurons and prevents their axons from being coated in fatty myelin sheaths. As a result, electrical signals don’t travel as efficiently from nerve cell to nerve cell. Neurons in the brain break down, leaving the organ spongy and leading to intellectual disabilities, loss of movement, abnormal muscle tone, and seizures, among other symptoms. In the first US trial of a gene therapy for Canavan, researchers tried encasing healthy copies of ASPA in liposomes and injecting them into the brain through an intraventricular catheter attached to a small, plastic, dome-shaped reservoir placed just beneath the scalp. The researchers injected the gene therapy into the reservoir, and it then diffused into the cerebrospinal fluid. In 1999, Maxie became one of 16 patients to receive the treatment. Maxie and his cohort showed some improvements in vision and movement, but the children weren’t cured.

All of this could have never happened without the support and devotion, the passion of patient advocacy groups, specifically families.

“We knew all along . . . that the ideal way to deliver a gene to the brain was with a viral vector,” says Paola Leone, a neuroscientist now at Rowan University who worked on the initial clinical trial at Thomas Jefferson University. As that trial proceeded, she and her collaborators began work on a second gene therapy with an adeno-associated viral (AAV) vector. Then, in 1999, a young man named Jesse Gelsinger died following an adenoviral-based gene therapy to treat a different disease. Even though Leone and colleagues were using an AAV vector, not an adenoviral vector, their research stalled along with the rest of the gene therapy field. Slowly, after working to show the safety of the AAV vectors, Leone and others pushed forward on a new gene therapy for Canavan, and started the first trial in June 2001. The treatment moved through both Phase 1 and Phase 2 clinical trials, and in 2012, the team published the first long-term study that tracked the safety of the treatment, along with some measures of efficacy. Injecting 900 million vector genomes directly into a patient’s brain appeared to decrease the levels of N-acetyl-L-aspartic acid, slow brain atrophy, and reduce the frequency of seizures, the team reported. 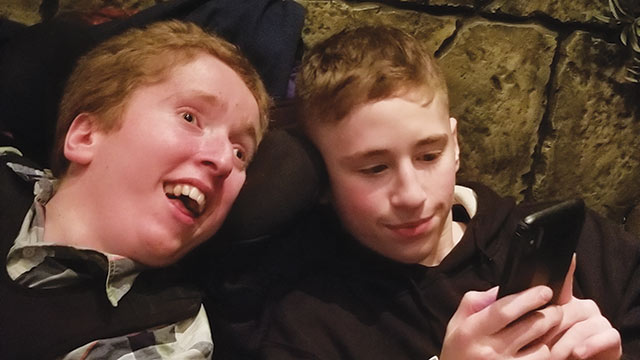 Based on the results of the study, a drug company could have moved the therapy to a Phase 3 clinical trial. The funding was there, but “there wasn’t any interest,” Leone says. The disease was too rare, with just 2,000 people affected worldwide.

The response isn’t uncommon. The development of therapies for rare diseases is often funded by parents of sick children, either through individual donations or foundations like Randell’s, Leone adds: “All of this could have never happened without the support and devotion, the passion of patient advocacy groups, specifically families.”

Randell says the reason Maxie is alive today, and gearing up for his 21st birthday, is because he received both the liposome and AAV treatments. Still, Maxie is far from cured. He is severely disabled, without the ability to move his arms and legs. He’s learned to use several different eye scan and retinal-gaze computers, but his favorite mode of communication, she says, is blinking his eyes. “You’ll say, ‘Oh Maxie, I love you so much,’ and he’ll squeeze his eyes shut really tight. The longer he does it, the more meaning it has.”

But there is still no FDA-approved gene therapy for Canavan disease. Randell continues to push for the development of new and improved gene therapy treatments that Maxie could try; she’s holding out hope, not just for her own son, but also for parents with children newly diagnosed with the disease. Some such parents have launched funding efforts of their own. The Landsman family, for example, launched a GoFundMe campaign to develop a treatment for Canavan after their two young sons were diagnosed with the disease; it raised $1.1 million in its first three months.

Randell, the Landsmans, and others affected by Canavan could get their wish. Two groups, one that includes Leone and one led by Guangping Gao of the University of Massachusetts Medical School, are racing to get the regulatory OK for another round of gene therapy trials to treat Canavan. The treatments in development have the potential to vastly improve upon earlier versions. Leone and her collaborators are working on a viral vector targeted at the white matter of the brain, specifically the myelin-making oligodendrocytes, rather than neurons. Aspartoacylase is naturally produced in oligodendrocytes, and it’s there that the enzyme breaks down N-acetyl-L-aspartic acid, Leone explains. The vector would still be injected into the brain through holes drilled into skull, but by homing in on oligodendrocytes, the treatment could boost the myelination of neuronal axons and improve patients’ motor function and development.

In contrast, Gao and his collaborator Dominic Gessler are developing an intravenous injection that would travel across the blood-brain-barrier. “Interestingly, if you look at the expression of ASPA, which is the defective enzyme, it’s actually expressed almost in every cell in the body,” Gessler says. “For that reason we highly advocate this intravenous injection approach, where we use a single dose to treat the entire body.” The approach has shown promising results in a mouse model of the disease.

Crowdfunding supports both groups’ work, and the researchers involved say that their findings on Canavan disease could also be applied to more common neurodegenerative diseases, such as amyotrophic lateral sclerosis or Parkinson’s. If the vector can effectively deliver the gene to the targeted cells, it could give clues to how to deliver corrective genes in other diseases. The work could, Gessler says, “actually be beneficial for many more people than just the ones directly affected by Canavan disease.”