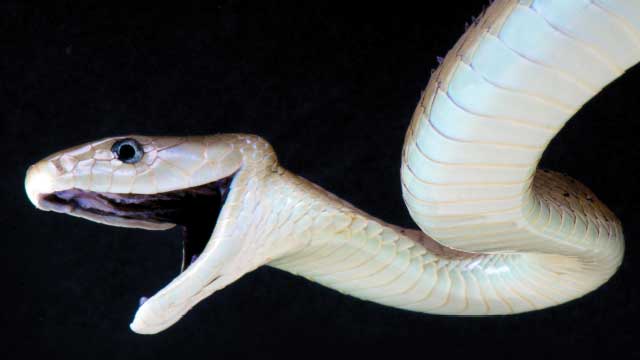 © Matthijs Kuijpers/ALAMY STOCK PHOTO Snakes represent some of the deadliest venomous animals in the world, killing between 81,000 and 138,000 people each year, according to the World Health Organization. But in low doses, some of their toxins can produce analgesia.

For instance, a toxin from the black mamba (Dendroaspis polylepis) inhibits pain by blocking acid-sensing ion channels on the surface of pain-transmitting neurons in mice (Nature, 490:552-55, 2012). Another compound, taken from the venom of the king cobra (Ophiophagus hannah), likewise diminishes pain but acts in an unusual way. R. Manjunatha Kini of the National University of Singapore has found that so-called hannalgesin likely disrupts nitric oxide synthase in neurons, thereby reducing nitric oxide production, which is involved in pain. “There are many ways of skinning a cat, and there could be many ways to block pain,” says Kini.

Toxins that cause pain can be just as useful as those which block pain because they can teach us more about how pain works.—Bryan Fry, University of Queensland

The University of Queensland’s Bryan Fry says snake venoms could contribute to pain therapeutics in ways other than by tapping into their analgesic components: by zeroing in on venom compounds that cause pain. In 2016, Fry’s group described the mechanism by which the toxin of the long-glanded blue coral snake (Calliophis bivirgatus) acts upon the NaV1.4 voltage-gated sodium channel (Toxins, 8:303, 2017), “therefore revealing a new target for drug design,” he says in an email to The Scientist. “Toxins that cause pain can be just as useful as those which block pain, because they can teach us more about how pain works.”