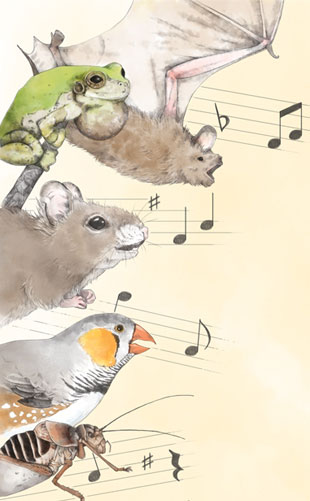 © LUCY CONKLINFor thousands of years, people have appreciated birdsong as one of nature’s most melodic sounds. And for at least a few centuries, researchers have been talking about—and analyzing— birdsong, some attaching the label “music” to the avian behavior. In the mid-17th century, for example, German scholar Athanasius Kircher transcribed bird song with musical notation. Whether singing avian species hear their calls in a musical sense is, of course, anybody’s guess. But still today, it’s fairly uncontroversial to speak about bird vocalizations using terms such as “song” and “music.”

Around the animal kingdom, several nonavians also produce sounds that are sometimes discussed using a musical vocabulary. Whale songs echo through the ocean for hundreds of miles, while frogs and crickets chorus on warm summer nights throughout much of the world. The stringency of the criteria for earning a label such as song varies by taxon, however. Birds,...

Semantics aside, more and more tonal or cadenced animal communication signals are attracting the attention of researchers. Technological advancements have enabled the study of mouse and bat calls that are broadcast in the ultrasonic range, as well as of the love songs of fruit flies, which vibrate their wings to produce sound within the frequency range of human hearing, but do so a million times more quietly than our ears can detect. And research continues to delve into the musical skills of diverse bird species that have long been recognized for their singing prowess, confirming that there is an overlap between the genes and brain areas involved in bird and human vocal learning.

Of course, “these systems are very different,” notes Ani Patel, a psychologist Tufts University who studies music perception in people. “It’s dangerous to go in thinking that animals do music the same way we do.”