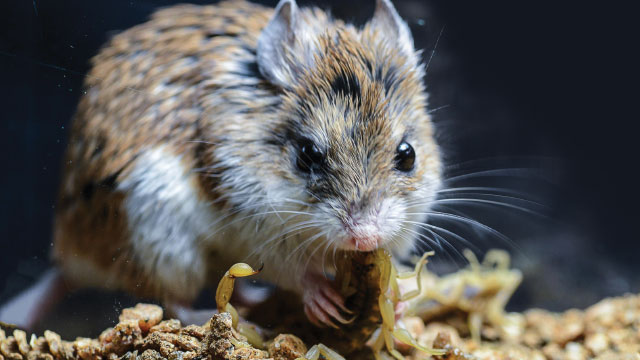 MATTHEW P. ROWEStudying scorpions comes with its share of danger, as biologist Bryan Fry of the University of Queensland knows all too well. On a 2009 trip to the Brazilian Amazon, Fry was stung while trying to collect the lethal Brazilian yellow scorpion (Tityus serrulatus), and for eight hours he says it felt as though his finger was in a candle flame. Meanwhile, his heart flipped between racing and stopping for up to five seconds at a time. “At least the insane levels of pain helped keep my mind off my failing heart,” Fry writes in an email to The Scientist.

His symptoms were caused by an arsenal of toxins in the animal’s sting, which contribute to one of the most painful attacks in the animal kingdom. But at least one mammal—the southern grasshopper mouse (Onychomys torridus)—regularly chows down on Arizona bark scorpions...

Rowe’s team showed that grasshopper mice have evolved amino acid changes in NaV1.8 that allow it to bind scorpion venom components, and in turn prevent the channel’s activation. Because NaV1.8 is responsible for transmitting pain signals to the central nervous system following NaV1.7 binding, blocking its activation prevents the sensation of pain. In other mammals, scorpion venom has no effect on NaV1.8.

Rowe and her collaborators have since isolated several candidate peptides that inhibit the firing of grasshopper mouse NaV1.8 to various degrees. “[Our goal is] to understand the molecular and the biophysical interactions between the channel and those peptides,” she says. “We ultimately hope to use them as a framework to design peptides that would do the same thing in a human channel.”

On the other side of the world, Peng Cao, a biologist at Nanjing University of Chinese Medicine, is studying the interactions of NaV1.8 with components from the venom of the Chinese scorpion (Buthus martensii Karsch), which for thousands of years has been used in traditional Chinese medicine to treat many ailments, including pain. “During more than 400 million years of evolution, scorpions have developed an efficient venom arsenal, composed of extremely diverse active components,” writes Cao in an email to The Scientist. “In recent years, my team has isolated a range of scorpion analgesic peptides which target voltage-gated sodium channels.”