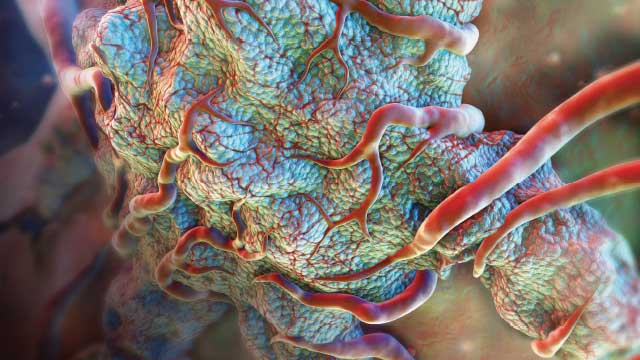 A helium balloon tugs gently at the end of its string. The tension in the string resists the buoyant force of the helium, and the elastic nature of the balloon’s rubber contains the helium gas as it tries   to expand. Cutting the string or poking the rubber with a pin reveals the precarious balance between the forces, upsets the equilibrium, and sets the system into motion.

Some biological tissues also exist in such a state of offsetting forces. The most familiar example is the balance between blood pressure and the elastic tension in the cardiovascular system that contains and conveys blood without bursting or collapsing. And in tumors, both solid and fluid forces are generated that make the cancerous tissue a lot like that helium balloon: cut a tumor with a scalpel and it rapidly swells and deforms as pent-up forces break free from structural elements...

One force that is notably higher in tumors than in healthy tissues is fluid pressure, resulting from hyperpermeable, leaky blood vessels and a dearth of draining lymphatic vessels. Researchers have known since the 1950s that tumors exhibit elevated fluid pressure, but the implications for tumor progression and drug delivery were not realized until the late 1980s. That was when we (R.K.J. and colleagues) used a mathematical model to predict—and subsequently validate in animal and human tumors—that a precipitous drop in fluid pressure at the tumor–normal tissue interface causes interstitial fluid to ooze out of the tumor.2 This seeping fluid pushes drugs, growth factors, and cancer cells into the surrounding tissue and lymphatics, reducing drug delivery and facilitating local tumor invasion and distant metastasis.

In the last 15 years, researchers have identified diverse sources of increased pressure in tumors, which may serve as possible targets for cancer therapy.

Based on this insight, we suggested in 2001 that anti-angiogenic drugs could be used to lower a tumor’s fluid pressure and improve treatment outcome.3 This hypothesis changed the thinking about how existing anti-angiogenesis therapies actually work and spurred research into other physical forces acting in cancer.4 In the last 15 years, researchers have identified diverse sources of increased pressure in tumors, which may serve as possible targets for cancer therapy.5 For example, solid forces exerted by the extracellular matrix can be reduced by treatment with drugs approved by the US Food and Drug Administration (FDA) for controlling hypertension (angiotensin blockers) or diabetes (metformin). Retrospective clinical studies have found improved survival in cancer patients who were treated with these agents, which are now being tested in prospective trials for a variety of solid tumors.6,7 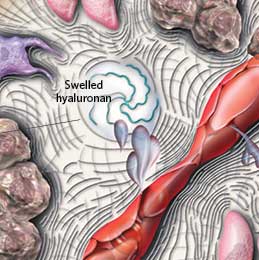 UNDER PRESSURE
See full infographic: WEB | PDF© N.R.FULLER, SAYO-ART LLCIn vitro experiments showing that cancer cells actively migrate in response to fluid flow have supported the hypothesis that fluid escaping from the boundary of a tumor may guide the invasive migration of cancer cells toward lymphatic or blood vessels, potentially encouraging metastasis. There remains controversy over how the fluid forces induce the migration; the cells may respond to chemical gradients created by the cells and distorted by the flowing fluid,8 or the fluid may activate cell mechanosensors.9 Because of the potential for new therapeutic interventions, the transduction of mechanical fluid forces into biochemical signals by cell mechanosensors is an active area of investigation. In a more direct manner, the fluid flow can physically carry cancer cells to lymph nodes.

Fluid forces may also promote tumor progression by recruiting blood vessels into the cancerous mass.10 Because tumor blood vessels are leaky, plasma can pass freely between vessels that have different pressures. When this happens at the periphery of a tumor, where angiogenic growth factors are prevalent, there can be synergistic induction of new vessel sprouts.

And fluid pressure is just one of the many forces in a tumor that can influence its development and progression. Tumors also develop increased solid pressure, as compared with normal tissue, stemming from the uncontrolled division of cancer cells and from the infiltration and proliferation of stromal and immune cells from the surrounding tissue and circulation. High-molecular-weight polysaccharides known as hydrogels found in the extracellular matrix (ECM) also add pressure on a tumor. The most well-studied of these hydrogels is hyaluronan; when the polysaccharide absorbs water, it swells, pressing on surrounding cells and structural elements of the tissue.

The ECM contains a highly interconnected network of collagen and other fibers and is normally very good at resisting and containing such tension. It also has support from infiltrating myofibroblasts, which detect areas where the ECM density or tension is not normal and initiate actomyosin-based contraction of collagen and elastin matrix structures to restore tensional homeostasis. But while this repair effort is typically effective in healthy tissues, uncooperative tumor cells interfere with these efforts, both by themselves generating pressure and by hyperactivating cancer-associated fibroblasts to produce more ECM and thus produce even more force.11

Because cell growth and ECM composition are not spatially uniform in cancer, tumors are subjected to multiple, dispersed sources of pressure associated with matrix “containers” of various sizes. This solid pressure from within the tumor deforms the surrounding normal tissue, potentially facilitating the metastatic escape of cancer cells. The physical forces also compress blood vessels and lymphatic vessels in the tumor and adjacent normal tissue,12 increasing the fluid pressure in the tumor13  and interrupting the delivery of nutrients, removal of waste, and entry of tumor-targeted drugs via the blood.4 Insufficient blood flow also results in poor oxygenation, which has been linked to immunosuppression, inflammation, invasion, and metastasis, as well as lowered efficacy of chemo-, radio-, and immunotherapies.4 These are all indirect consequences of solid stresses in and on tumors.

Such forces can also have direct effects on cancer cells, and may serve as independent triggers for tumor invasion. Mechanical forces are central to many of our sense systems, such as hearing, touch, and pain, and to tissue maintenance programs, such as bone regeneration and blood vessel remodeling. In these systems, mechanical forces are transduced by mechanosensors to activate downstream biochemical and genetic pathways. (See “Full Speed Ahead,” The Scientist, December 2009.) Cancer cells may similarly be able to sense and respond to dynamic forces in tumors. We have shown, for example, that metastatic cancer cells exposed to compressive stresses in a culture dish undergo a phenotypic transformation to become more invasive,14 and others have shown that compressive forces applied in vivo can also induce oncogenes in normal epithelium of the mouse colon.15

It is thus becoming quite clear that the physical environment can influence a tumor’s development and spread, and it may even be possible for physical forces to kick-start cancerous growth.

In addition to the influence of physical forces on cancer growth and invasion, forces can alter a tumor’s mechanical properties, and vice versa. Tumors are more rigid, or stiffer, than surrounding tissues, usually because they contain excess collagen in the ECM,5 and this can contain and amplify local forces produced by proliferating cancer cells. On the other hand, tumor rigidity can be further enhanced if the cells exert tension on ECM collagen fibers by pulling on them, or by stretching them, as occurs when tumors grow uncontrollably. Fluid forces can also influence the assembly of collagen fibers within and around tumors,8 potentially increasing stiffness.

Importantly, tumor stiffness tends to be associated with poor prognoses, though the reasons for this are not fully understood. Cells are known to differentiate into different lineages depending on the local rigidity;16 for example, stem cells differentiate into bone on stiff substrates, but make adipose (fat) cells on softer substrates. Similar mechanisms are thought to affect tumor progression when the ECM changes rigidity, inducing cancer cells to become more invasive as well as more likely to metastasize. Indeed, longer collagen fibers in the matrix are associated with increased invasion and metastasis, as well as reduced survival, in mice.17

In addition, the abnormal ECM in tumors can affect cancer progression by activating normal stromal cells, such as macrophages and fibroblasts, that accelerate tumor growth and treatment resistance. These activated stromal cells further strengthen and stretch the ECM, causing a snowball effect.

The biochemical composition and organization of the ECM also influences tumor biology. Dysregulation of normal matrix signals can lead to tumor progression, characterized by excessive cell proliferation, immortality, enhanced migration, changes in metabolism, and evasion of the immune response. More research is needed to dissect the relationships between the ECM’s mechanical properties, forces, and cell signaling pathways. 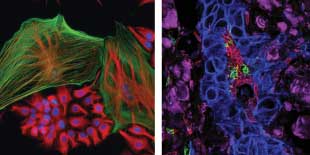 Because of its role in containing and concentrating the forces in a tumor, the collagen matrix within and around the tumor is another potential target for relieving tumor-related stresses. Indeed, solid stress in tumors can be reduced by drugs that selectively reprogram activated fibroblasts or modify the assembly of matrix components such as collagen and hyaluronan. In rodent studies, targeting these force-altering components in the tumor microenvironment has been shown to decrease solid stress, improve blood perfusion and drug delivery, and improve tumor response to chemotherapy and animal survival.6 We have found, for example, that injecting tumors with a collagen-digesting enzyme increases the diffusion of antibodies and viral particles and improves drug penetration in the tumor. Similarly, treatments that target transforming growth factor–beta (TGF-β), which controls the production of collagen by myofibroblasts, increase perfusion, improve the delivery of drugs of all sizes in mammary tumors, and improve treatment outcomes in mice.5

A class of drugs that is widely used to control blood pressure in hypertensive patients also blocks the TGF-β pathway. These drugs, known as angiotensin receptor 1 blockers, can reduce collagen production in and around the tumor by reducing the activity of TGF-β, as well as by blocking the function of connective tissue growth factor (CTGF), which is involved in stabilizing collagen and inducing resistance to chemotherapy.6 Losartan and other angiotensin inhibitors reduce levels of collagen in various experimental models of fibrosis, and decrease renal and cardiac fibrosis in hypertensive patients. When given to mice with one of four different types of tumors characterized by high levels of cancer-associated fibroblasts (CAFs) and excess extracellular matrix—pancreatic ductal adenocarcinoma, breast cancer, sarcoma, and melanoma—losartan treatment caused a decrease in collagen content in a dose-dependent manner, enhanced penetration of nanoparticles into the tumor, and improved efficacy of diverse anticancer drugs. This is supported by a number of retrospective studies in patients with pancreatic, lung, and kidney cancers.6 Researchers at Massachusetts General Hospital are now running a Phase 1/2 clinical trial to test losartan in pancreatic cancer patients.

It is becoming quite clear that a tumor’s physical environ­ment can influence cancer development and spread.

Another potential cancer treatment target is hyaluronan, which is abundant in 20 percent to 30 percent of human tumors, most notably breast, colon, and prostate cancers. In addition to its role as a pressure-creating gel, hyaluronan can sequester growth factors and inhibit interstitial fluid movement within the tumor. Hyaluronidase, an enzyme that digests hyaluronan, reduces mechanical stress in tumors grown in mice.1 And San Diego–based Halozyme Therapeutics’s PEGPH20, a formulation of hyaluronidase coated with polyethylene glycol to enhance bioavailability, can decompress blood vessels and improve treatment outcome in genetically engineered mouse models of pancreatic ductal adenocarcinoma. Based on these studies, Halozyme researchers are now testing PEGPH20 in a randomized clinical trial of pancreatic cancer patients. Another matrix-altering drug is the widely-prescribed antidiabetic drug metformin, which has been shown to decrease collagen and hyaluronan levels in pancreatic tumors in obese mice and patients.7 Metformin is currently being tested in more than 200 clinical trials worldwide as a treatment for different types of cancer.

Clearly, tumors should be studied not only in light of their biochemical processes and genetic underpinnings, but also for the specific physical forces and mechanical properties that may influence progression. Understanding the physical microenvironment of tumors, as well as its interplay with the biochemical environment, is necessary to improve cancer detection, prevention, and treatment.