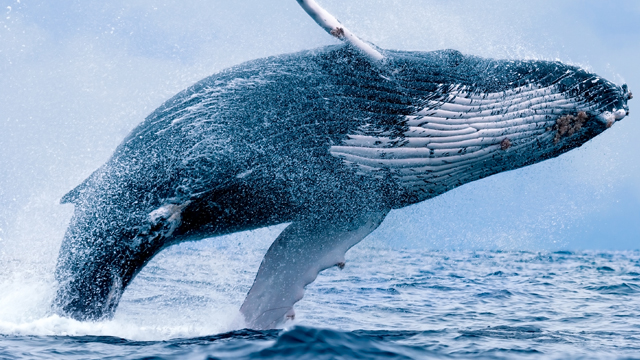 In a 1971 paper published in Science, biologist Roger Payne, then at Rockefeller University, and Scott McVay, then an administrator at Princeton University, described the “surprisingly beautiful sounds” made by humpback whales (Megaptera novaeangliae; Science, 173:585-97). Analyzing underwater recordings made by a Navy engineer, the duo found that these whale sounds were intricately repetitive. “Because one of the characteristics of bird songs is that they are fixed patterns of sounds that are repeated, we call the fixed patterns of humpback sounds ‘songs,’” they wrote.

OCEAN SONGS: Humpback whales make diverse, broadband sounds that travel miles through the ocean. Their function, however, remains somewhat murky.PLOS ONE, dx.doi.org/10.1371/journal.pone.0079422, 2013 It’s now clear that, in addition to simpler calls, several baleen whale species—including blue, fin, and bowhead—make series of sounds known as song. Humpback song is the most complex and by far...

But why do whales sing? “The short answer is, we don’t know,” says Alison Stimpert, a bioacoustician at Moss Landing Marine Laboratories in California. Humpback songs are only performed by males and are often heard on breeding grounds, so the dominant hypothesis is that these songs are a form of courtship. The quality of a male’s performance could be a sign of his fitness, for example. But female whales do not tend to approach singing males. Alternatively, whale researchers have proposed that the male whales sing to demarcate territory or to form alliances with other males during mating season.

Song may have a function outside of the breeding season as well. Stimpert, for instance, has recorded humpback song on an Antarctic feeding ground, sometimes in areas where the whales were lunging for food (PLOS ONE, 7:e51214, 2012).

Eduardo Mercado III, a professor of psychology at the University at Buffalo in New York, says that labeling patterned whale calls “song” led researchers to focus closely on reproduction. “It gave people tunnel vision about how you should study song and what you should look for,” he says. Mercado proposes that humpback song could be a form of echolocation, in which whales listen to the echoes of their own and other whales’ vocalizations—which can travel multiple kilometers through the water—to navigate the ocean and detect large masses, like other whales, from far away.

As debate continues on the function of humpback song, researchers continue to catalog the sounds of other marine species. In September 2016, for example, biologists described an unfamiliar sound—hypothesized to be a minke whale call—in the area of the Mariana Trench. “There’s still new stuff out there, and we’re still figuring out what produces it,” says Stimpert.

Read about the rest of the animal chorus, including bats, rodents, amphibians, insects, and fish, in “Song Around the Animal Kingdom.”