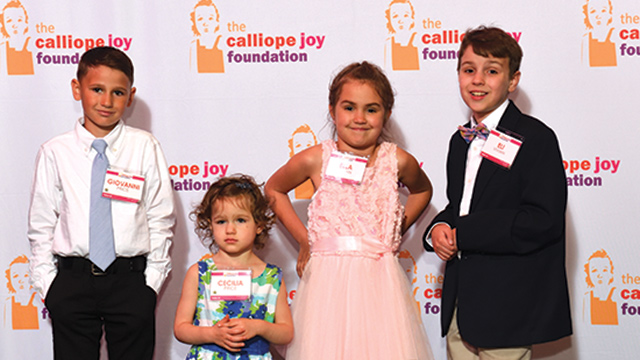 PARTY TIME: The Calliope Joy Foundation organizes regular “cupcake celebrations” to raise money for research on leukodystrophy. The funds have helped send young patients (four of whom are shown above) to Milan to receive an experimental stem cell treatment for one variation of the disease, metachromatic leukodystrophy (MLD).THE CALLIOPE JOY FOUNDATION

By the time Maria Kefalas and Patrick Carr noticed anything wrong with their youngest daughter, it was too late. Shortly after her second birthday, Calliope Joy—Cal to her parents—started to lose her balance. The family, who live in a Philadelphia suburb, visited the Children’s Hospital of Philadelphia, and in July 2012, Cal’s doctors returned a diagnosis: metachromatic leukodystrophy (MLD), a rare neurodegenerative disease that affects 1 in 40,000 infants and is caused by a genetic mutation in the ARSA gene on chromosome 22.

Children with MLD cannot produce arylsulfatase-A, an enzyme that breaks down sulfatides. So the...

To help assuage their grief, Cal’s parents established The Calliope Joy Foundation (TCJF) to raise money to support research into the disease. They hosted cupcake sales, and over the course of several months built up a network of families struggling with MLD or any of the more than 50 variations of leukodystrophy, all of which involve myelin damage. Then, one year after her daughter’s diagnosis, Kefalas, a sociology professor at Saint Joseph’s University in Philadelphia, came across a paper in Science written by a group of researchers at the San Raffaele Scientific Institute in Milan.

The paper described a radical approach to treating MLD: researchers had used a self-inactivating HIV vector to insert functional ARSA sequences into patient-derived stem cells ex vivo, and then implanted the cells back into patients’ bone marrow to produce the missing enzyme. “I have to admit, it sounded like mad science,” Kefalas says. “The idea of infecting children with an inert virus seemed to me a very frightening prospect.”

She will have a legacy that’s so beautiful—I’ll get to see the children that her life helped save.

But the approach had a track record: San Raffaele’s Alessandra Biffi and her colleagues had shown in the early 2000s that it slowed the progression of MLD in a mouse model, and in 2010, GlaxoSmithKline (GSK) announced it would get involved in the research. In the 2013 paper, the team presented data from its first human study of three presymptomatic children—each of whom had been diagnosed after an older sibling started showing symptoms of the disease. The therapy, the team reported, stopped MLD in its tracks. “It was the best outcome we could have predicted,” Biffi, now director of the Gene Therapy Program at the Dana-Farber Cancer Institute in Boston, tells The Scientist.

At first, the news was difficult to swallow for Cal’s family. “I remember calling my daughter’s doctor in Philadelphia, in tears of despair over the fact we’d missed our chance to help Cal,” Kefalas says. But as Cal’s doctor pointed out, the study showed that the treatment could halt MLD’s progression—it could do little to improve the symptoms of children already displaying signs of severe nerve damage. What’s more, the trial had recruited only presymptomatic patients; Cal, by the time she was diagnosed, wouldn’t have been eligible. However, Cal’s doctor also had a suggestion: that Kefalas help recruit participants for the next trial in Milan. “You’ve mistaken me for somebody brave,” Kefalas remembers replying.

Yet brave is exactly what she was. In 2014, The Calliope Joy Foundation helped raise money for the family of Cecelia Price, another child diagnosed with MLD, to travel to Milan. More families followed, from the U.S., Australia, and several European countries. By the end of last year, TCJF had raised hundreds of thousands of dollars through cupcake sales and other efforts, which helped fund travel for 10 children and establish the Leukodystrophy Center of Excellence at the Children’s Hospital of Philadelphia. In 2017, the Italian team published an update on their study results: Of the first 21 presymptomatic and early onset patients treated with the therapy, 19—some of whom had been treated more than five years previously—had survived without significant disease progression.

“Alessandra Biffi’s work is very, very promising, and very positive,” says Dolan Sondhi, a medical geneticist at Weill Cornell Medical College who is not involved in the research. She notes that wiping out existing bone marrow stem cells by chemotherapy—a pre-treatment necessary for the stem cell therapy to work—raises the risk of infection; other groups are developing therapies that avoid this step. The biotech company Shire, for example, is trialing an enzyme replacement therapy, and Sondhi is involved in developing a therapy that uses an attenuated adenovirus to deliver ARSA directly into the central nervous system—although neither is as far along as the Italian group’s approach, and none of the treatments have shown promise in reversing the damage caused in patients with later stages of the disease.

The path to regulatory approval for the Milan group’s therapy remains uncertain. Last summer, GSK’s new CEO Emma Walmsley announced that the company would be moving away from rare-disease research. Kefalas responded with an open letter that included a photo of several children who had taken part in the San Raffaele trial, “in case you have any doubts about the lives GSK’s gene therapy for MLD has changed.” GSK currently remains involved with San Raffaele’s ongoing Phase 3 trial, but is looking to “secure an appropriate partner to take over further development and commercialization of these medicines,” GSK spokesperson Mary Anne Rhyne writes in an email to The Scientist.

Calliope Joy, meanwhile, is now 8 years old. Her symptoms have worsened; she can no longer walk, see, or speak. But TCJF is a constant source of motivation for her mother. “Whenever I feel sad, I look at pictures of [children treated in the trial] playing basketball,” Kefalas says. “I’m just so happy that a child gets to do that.” It’s an outcome that seemed impossible only a few years ago. “I’m very proud of that,” Kefalas says. “My daughter is going to die. But at least she will have a legacy that is so beautiful—I will get to be able to see children that her life helped save.”