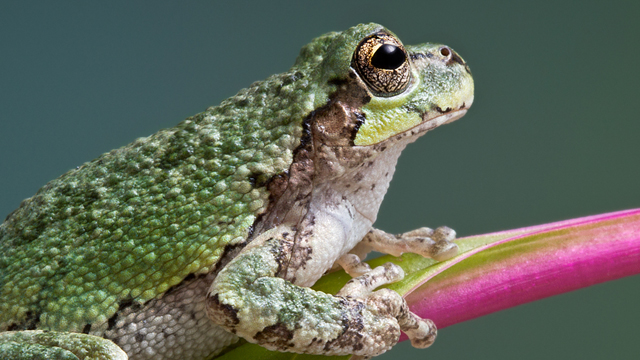 In anurans—the group of tailless amphibians to which frogs and toads belong—vocalization is all about sex. Males produce the majority of these sounds, most often to attract mates and defend territories. Many species have vocal sacs that amplify these so-called advertisement calls, which vary widely. “Every species has [its] own unique call,” says population geneticist Benjamin Pierce of Southwestern University in Georgetown, Texas. “Some are grunts, some are trills, some are peeping noises.” 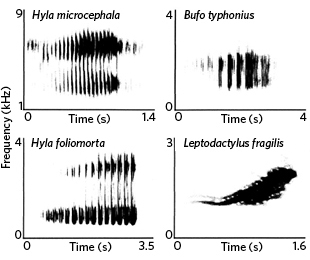 A DIVERSITY OF CHORUSES: Dozens of frog species call for mates. Vocalizations range from low frequency grunts to broad-spectrum trills. (Call of Hyla versicolor, pictured above, is not shown.)Despite the differences in vocalizations among frogs and toads, the repetitive nature of the calls is seen across diverse species. “Many of them call at—more or less—a fixed rhythm,” says zoologist Mike Ryan of the University of Texas at Austin. And heard in groups,...

Frogs rarely call in isolation. Males typically broadcast amongst a gaggle of competitors, and across the population, vocalizations overlap and syncopate—the animals are said to be chorusing. “Listening to a chorus of frog calls, it definitely has rhythm—it builds, it dies down—and it certainly can be ‘music,’” says Carlos Davidson, a professor of environmental studies at San Francisco State University.

“There’s melody, harmony, and repetition in frog calls,” agrees Phil Bishop, who studies amphibian communication at the University of Otago in New Zealand.

And the synchronization of the anuran chorus is not totally random. To attract the attention of potential mates in a competitive environment, male bird-voiced tree frogs (Hyla avivoca) adjust their pulse rates (Behav Ecol Sociobiol, 63:195-208, 2008). Female grey tree frogs (H. versicolor) showed a preference for leading pulses when researchers played a pair of overlapping pulsed signals that were typical of males of this species (Anim Behav, 80:139-45, 2010). And the calls of large groups of frogs are more likely to reach potential mates than the sounds of a lone amphibian, Davidson notes. While “each individual is calling for [his] sole benefit,” he says, “females will be more likely to hear and be attracted to . . . males all calling together.”

Davidson is also interested in creatures that eavesdrop on frog calls, such as nearby predators that might use the sound to deduce the size and location of potential prey. “There may be audiences—other animals that hear the sound—for which it has a very different meaning,” he says.

There are also human audiences. Pierce and colleagues survey frog calls in central Texas in order to identify which—and how many—frogs are present in a given environment. “You can [identify] about 90 percent of the species that are calling in 15 minutes,” Pierce says. “If you listen for 5 minutes or 10 minutes, you’re likely to miss some things.”

Read about the rest of the animal chorus, including birds, bats, rodents, insects, whales, and fish, in “Song Around the Animal Kingdom.”