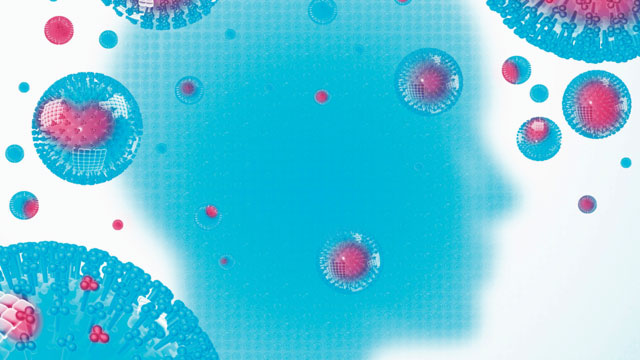 When it comes to viruses, those that transiently infect their hosts and cause the most damage get a lot of attention. Hollywood makes movies about Ebola, or about fictional viruses that resemble souped-up versions of the 1918 pandemic flu. Another viral world—one much closer to home—rarely enters the collective consciousness: the human virome.

A diverse, abundant, and underappreciated viral community exists on and within us, from our skin to our eyes, blood, brain, and other organs—even within our own genomes.1 Unlike marauding Ebola-like viruses, these viruses establish a balanced coexistence that can persist for a host’s entire lifetime. This coexistence involves careful control of the viral life cycle: whereas Ebola virus infection is flashy, persistent infection is elegant. (See illustration.)

Among other challenges, persistent viruses must effectively subvert the host immune response. To accomplish this, these viruses control both the timing and...

Previously thought of as a simple decoder of genetic information—serving as an intermediate between DNA and protein—RNA is now known to engage in a bevy of other important biochemical activities. Despite differences in ncRNA sequence, size, and function, a theme is emerging: diverse biological processes rely on ncRNAs to balance the timing and magnitude of gene expression.2 In eukaryotes, microRNAs (miRNAs) represent the best-characterized ncRNAs. About 22 nucleotides in length, these small RNAs bind to and repress target messenger RNA (mRNA) transcripts, allowing for fine-tuning of gene expression. The human genome encodes hundreds of different miRNAs to regulate numerous biological functions, and recent research is revealing how the viruses of the human body use these miRNAs, as well as their own, to establish and maintain long-term persistent infections.

MicroRNAs can be thought of as tools that viruses use to manipulate key aspects of our biology and immune response in order to hitchhike with us throughout our evolutionary history.

Persistent viruses may play roles both in defending their hosts—they have been speculated to “tune” our immune response, priming it to better combat more harmful microbes—and in directly causing serious disease in humans. This double-edged sword of viral persistence makes the phenomenon all the more important to understand. Elucidating how miRNAs and other ncRNAs function could spawn new therapies, while yielding insights about the evolutionary forces that dictate parasitism, mutualism, and other multiorganismal relationships.

MiRNAs function as components of a widely conserved set of eukaryotic gene-silencing machinery involved in the process of RNA interference (RNAi). RNAi occurs when RNA of a particular structure is processed into a smaller RNA molecule that directs sequence-specific silencing of gene expression. (See “Molecular Snipers,” The Scientist, September 2014.) While the interaction of any single miRNA with a target frequently results in only subtle modulation of gene expression, a single miRNA can regulate hundreds of different target mRNAs. Conversely, multiple miRNAs can regulate a single transcript. The sum of numerous miRNA-target interactions can have profound effects. 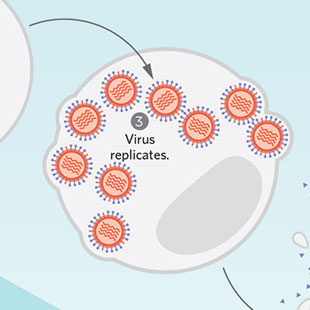 SHORT- VERSUS LONG-TERM INFECTION: While many viruses simply infect, replicate, lyse cells, and spread, others take up long-term residence in their host, sometimes living within the organism’s cells for a lifetime. This type of infection, known as persistent infection, requires a delicate balance of viral processes to avoid alerting the host immune system to the viruses’ presence.
See full infographic: JPG | PDF© LUCY READING-IKKANDAIn most eukaryotes, RNAi defends the host against mobile genetic elements such as endogenous transposons, and in some organisms, such as plants and insects, against viruses. In these organisms, foreign viral RNA is recognized and destroyed by a series of host machineries. Whether or not RNAi also serves as a meaningful antiviral response in mammals remains a controversial and unresolved issue.3,4 What is clear, however, is that multicellular eukaryotes, including mammals, generate endogenous miRNAs that enter the RNAi machinery to silence specific mRNAs, thus providing an additional layer of control for gene expression.

Over the last decade, my lab and several others have uncovered virus-encoded miRNAs from diverse viruses.5,6 This provides an interesting twist—host machinery that serves as an antiviral response in many organisms has been usurped by viruses for their own benefit. By binding to and silencing viral transcripts, for example, or by targeting host genes important for viral gene expression, viral miRNAs can optimize the location and timing of virus replication to fly under the radar of the host immune response. Some viruses also utilize miRNAs to directly regulate host defenses. Herpesviruses use viral miRNAs to block cell suicide,7 for example, while retroviruses and anelloviruses, a family of small single-stranded DNA viruses, rely on viral miRNAs to block the signaling activity of secreted antiviral cytokines.8,9 Meanwhile, members of the herpesvirus and adenovirus families use viral miRNAs and other types of ncRNAs, respectively, to block components of the innate immune response.5,10

One advantage of miRNAs as mediators of gene expression is their tiny genomic footprint. Since virus genome size is constrained by the requirement to fit within the protein shell, or capsid, miRNAs afford the virus the ability to regulate numerous genes with minimal genomic burden. Additionally, the immune response of jawed vertebrates is especially adept at detecting foreign proteinaceous cues of pathogen infection but not foreign miRNAs, so viral miRNA is largely invisible to the adaptive immune system. This allows the virus to regulate viral and host gene expression without alerting the host immune response to its presence. Thus, miRNAs and other ncRNAs can be thought of as tools that viruses use to manipulate key aspects of our biology and immune response in order to hitchhike with us throughout our evolutionary history.

The list of viruses that encode miRNAs and other ncRNAs includes members of the herpesvirus, polyomavirus, anellovirus, adenovirus, and retrovirus families. (See "Striking a Balance.") These viruses possess diverse physical structures and genome chemistries. Despite those differences, the viruses invariably share the ability to take up long-term residence in a host.

The coexistence of virus and host involves careful control of the viral life cycle: whereas Ebola virus infection is flashy, persistent infection is elegant.

Although the majority of such persistent viral infections are subclinical, serious disease can arise. For example, in patients who are immunosuppressed due to HIV-AIDS or on a regimen of immunosuppressive drug therapies, persistent viruses can result in life-threatening disease, including cancer, neurological defects, organ-transplant rejection, birth defects, and encephalitis. Additionally, more benign conditions such as cold sores, genital lesions, respiratory illness, and eye infections are associated with persistent viral infections in immunocompetent hosts.

In addition to the immune status of the host, regulation of viral gene expression can influence whether persistent viruses cause illness. These disease states can be viewed as conditions resulting from a disturbance to viral homeostasis, the maintenance of balanced gene expression for long-term virus production and fitness. Elucidating the role of ncRNAs, both of viral and host origin, has created considerable excitement, in part for their likely importance in understanding persistent infection and associated pathologies. For example, recent work in the herpesvirus family implicates both host and viral miRNAs in controlling the cues and signaling pathways involved in induction of lytic infection (high virus productive state resulting in cell death), and therefore, also in the diseases associated with lytic infection, such as cold sores or Kaposi’s sarcoma. 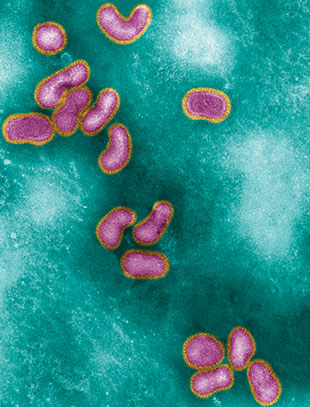 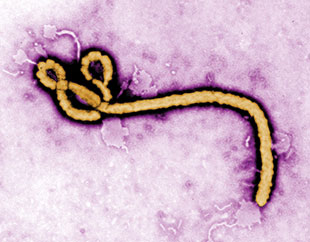 Ebola virusCDC/FREDERICK A. MURPHYIn their latent, or “cryptic,” state, some herpesviruses express only viral ncRNAs, while they can express hundreds of proteins when they switch to a productive state. During latency, miRNAs filter transcriptional noise, likely dampening the frequency of virus production and preventing expression of immunostimulatory antigens. When the host cell is no longer a safe haven—as a result of coinfection with other pathogens or physical stressors, for example—viruses will often initiate reproduction. Robust production of pro-lytic transcription factors by both the virus and its host overrides the inhibitory miRNA activity, resulting in a cascade of gene expression culminating in new virus production and eventual cell death. In addition, the fact that host and viral miRNA activity can be globally decreased by stress and other signaling events such as pathogen coinfection may allow viruses to utilize ncRNAs as a “barometer” of the optimal conditions for the switch from persistent to productive infection.11 Although best documented in the herpesviruses, such phenomena likely occur in other types of persistent viruses, especially the polyomaviruses, whose miRNAs have been shown to directly inhibit viral lytic gene expression.

Some viruses do not encode their own ncRNAs, but rather take advantage of those produced by their host. Papillomaviruses, causative agents of several different human cancers, take up long-term residence and have atypical life cycles that require differentiation of host cells for viral reproduction. Specifically, papillomaviruses express less viral protein in the inner skin cells of the dermal layer, where adaptive immune surveillance is greater, than they express in the more differentiated outer cells of the epidermis. Such a life cycle presumably requires tight regulation of viral gene expression, yet to date, no papillomavirus miRNAs have been identified. At least one type of papillomavirus, the cervical cancer–associated HPV31, solves this problem by taking advantage of a host miRNA whose expression levels inversely correlate with skin differentiation status.12 By maintaining a docking site for this host miRNA, HPV31 derives all the advantages of a viral-encoded miRNA without the burden of encoding an miRNA gene in its own genome.

Viral microRNAs can optimize the location and timing of virus replication to fly under the radar of the host immune response.

Although there are only a few reported examples of this sort, undoubtedly other papillomaviruses and other types of persistent viruses use a similar strategy. Even some herpesviruses that encode their own miRNAs have evolved to also take advantage of host miRNAs to optimize viral gene expression.13,14 These findings illustrate the ability of viruses to repurpose host machinery and underscore the utility of miRNAs for balancing gene expression during persistent infections.

Making use of ncRNAs

In addition to increasing our understanding of virus biology and associated pathogenesis, studying ncRNAs offers other insights. Because many viruses use ncRNAs to evade host defenses, these small molecules represent a valuable set of probes for uncovering key components of the antiviral response. Additionally, by engineering unnatural miRNA docking sites into viruses, researchers are able to generate viruses and viral vectors that better target specific tissues or species. This has the potential to improve the safety of gene therapies, vaccines, and cancer-fighting oncolytic viruses, and has even been proposed as a way to reduce the chances of harmful viruses escaping from laboratories.15 Because some ncRNAs have unique properties that make them useful biomarkers, viral ncRNAs may also be valuable for early detection of virus-associated disease.

As our appreciation of bacterial microbiota grows, a logical next step is to determine how the human virome contributes to health and disease. In the future, holistic examination of the full spectrum of viral diversity, not just of the viruses that make us ill, may be factored into medical decisions. For example, an increase in the levels of a benign persistent virus was recently suggested as a useful indicator for monitoring therapeutic immune suppression.16 Additionally, beneficially altering host viral communities, so-called provirotics, could conceivably contribute to improved human health. Advancing this exciting notion will require enormous effort to catalog and exploit the human virome and to decipher the contributions of the humble but elegant persistent viruses—and the ncRNAs that regulate them. 

Christopher S. Sullivan is an associate professor in the Department of Molecular Biosciences at the University of Texas at Austin.