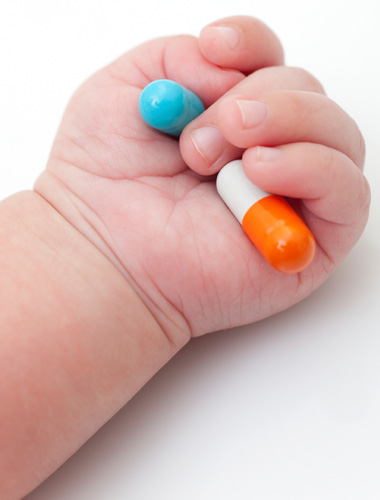 Over the past 15 years, new laws and regulations in the United States and the European Union have expanded to require the inclusion of pediatric patients in clinical drug trials.  Before these laws were enacted, the US Food and Drug Administration (FDA) allowed the effectiveness of a medication to be extrapolated from studies in adults, as long as the course of the disease and the effects of the drug were sufficiently similar in children and adults. The problem that wasn't sufficiently appreciated at the time was that drug safety in children cannot be extrapolated from adult data.[1. R. Steinbrook, “Testing medications in children,” New Engl J Med, 347:1462-70, 2002.] There are critical differences in how a drug is processed–the drug's pharmacokinetics–in a child's body compared with an adult's, and even among children at different developmental stages.[2. R. Johann-Liang et al.,"Pediatric drug surveillance and the food and drug administration's...

Age-appropriate dosing guidelines must be crafted with knowledge of how the relationship between dose and exposure changes with growth and development. For example, some members of the cytochrome P450 (CYP) family of hepatic drug-metabolizing enzymes are not expressed in the fetal liver, or become functional late in pregnancy or within hours to days after birth (including CYP2C9, CYP2C19, CYP2D6, CYP2E1, and CYP3A4), whereas others do not achieve full maturation until much later (e.g., CYP1A2, flavin monooxygenase 3).[4. R.N. Hines, “The ontogeny of drug metabolism enzymes and implications for adverse drug events,” Pharmacol Ther, 118:250-67, 2008.] Although the molecular mechanisms underlying the different developmental patterns of expression have not been well characterized, new insights are being gained from animal models and in vitro studies of pediatric drug metabolism.  For example, the maturation of the fetal liver is characterized by a shift from expression of the drug-metabolizing enzyme CYP3A7–a key producer of estriol, a type of estrogen that is predictive of fetal health during pregnancy–to CYP3A4, the most abundantly expressed CYP in postnatal liver.  Studies in mice have revealed that changes in histone methylation underlie a similar developmental switch from Cyp3a16 in neonatal liver to Cyp3a11 in adult liver.[5. Y. Li et al., "Dynamic patterns of histone methylation are associated with ontogenic expression of the Cyp3a genes during mouse liver maturation," Mol Pharmacol, 75:1171-79, 2009.] In germ-free adult mice, Cyp3a11 activity is stimulated by bacterial colonization of the gut. In humans, gut microbial colonization occurs within the first week of life and transforms to adult patterns over the first year. Therefore, it is not unreasonable to speculate that gut colonization with protective commensals contributes to the appearance of certain drug-metabolizing enzymes.[6. S.P. Claus et al., "Colonization-induced host-gut microbial metabolic interaction," mBio, 2: e00271-00210, 2011.],[7. C. Palmer et al., "Development of the Human Infant Intestinal Microbiota," PLoS Biol, 5: e177,2007.]

The general assumption that if a disease appears similar in a child, it must be similar to that of an adult has led to the use of drugs in children that were not helpful at best, and at worst, harmful or even deadly. For example, pediatric gastrointestinal stromal tumors (GISTs) lack the gain-of-function mutations in KIT or PDGFRA commonly found in adult tumors. This absence means not only that the cancer may have a different molecular origin, it also implies children will have reduced or lack of response to tyrosine kinase inhibitors, such as imatinib and sunitinib, commonly used to treat these cancers.[8. L. Rink, A.K. Godwin, “Clinical and molecular characteristics of gastrointestinal stromal tumor in the pediatric and young adult population,” Curr Oncol Rep, 11:314-21, 2009.] Clearly, child-specific research is desperately needed. To that end, efforts are underway to investigate the mechanisms of pediatric disease, with the hope that identifying the molecular subtypes will lead to better-informed drug treatment.

Lastly, no medication can be expected to be effective in children if it is rejected on the basis of taste and texture.[9. J.A. Mennella, G.K. Beauchamp, “Optimizing oral medications for children,” Clin Ther, 30:2120-32, 2008.] There have been some exciting new developments in the science of taste and flavor that have important implications for developing drug formulations that will be acceptable to young patients who haven't learned to swallow pills.  In one approach, chemical entities are being developed to "block" or "mask" bitter-tasting medications through antagonism of bitter taste receptors or interference with the perception of bitterness, respectively. Particularly interesting are studies revealing that young children are more likely to be extremely sensitive to bitter tastes.[10. J.A. Mennella et al., "Genetic and environmental determinants of bitter perception and sweet preferences," Pediatrics, e216-e222, 2005.],[11. J.A. Mennella et al.,"Age modifies the genotype-phenotype relationship for the bitter taste receptor TAS2R38," BMC Genetics, 11:60, 2010.] However, developmental changes in bitter sensitivity also appear to be genotype-dependent, so not every child will display the same degree of  bitter sensation.

Recognition of the ways in which children differ from adults with respect to how they handle and respond to drugs has increased considerably over the past 10 to 15 years. More recent is an appreciation of the fact that nominally similar pediatric and adult diseases may be fundamentally different at the molecular level.  Although developing drugs specifically for children is not economically feasible under current drug-development models, an investment in better understanding the cellular pathways and biological networks underlying a given pediatric disease process may allow new compounds under development for adult disorders to be investigated in pediatric diseases sharing the target pathway.