How did you survive as a child?

Part luck, part [ly being] resourceful, you had to get food by stealing. I became fairly good with it.... Once you are operating in a particular area, and your cover is blown, then you move on.

What scars remain? What strengths did you gain?

The easiest way is not even to think about it. The strengths are self-reliance. There are different ways of doing science. What we like to do [at this lab] is do it all ourselves.... To me, it's important to go into a biological problem and then develop [the] technology to answer that question. That is going back to being self-reliant, to finding your own food and surviving.

When you're on your own, you spend a lot of time thinking. To go from step A to step B, I can concentrate on something, it doesn't...

Define stress for you

I do everything at the last minute. Stress is having a grant due in two weeks and not having started it. I have piles of stuff; anything that is two months [off] just sits there.

How did you start studying Hox genes?

In the early 1990s, people were studying and people were studying mammals and other organisms and each thought the genes were going to be unique. So the genes were the first set of genes that [made] people realize we were all together in the same ballpark ... [they are] involved in practically everything.... We are following the proteins themselves. We use micro-arrays that use RNA as a base to follow the activity of multiple genes.

What is your research goal?

I'm envisioning [two projects] that will take about 20 years to unravel. One is how the nervous system is put together. ...We inactivated b8; that gives you a phenotype that resembles obsessive-compulsive disorders.... A lot of these genes are expressed in the forebrain. In the embryo, the orders in which they appear on the chromosome [determines] where on the body [the genes] are operating. In an adult...the genes can be anywhere; a lot of them are expressed in the brain.

And two: In mammals, 99% of the genes are the same... How do you have the same genes [and] get a completely different [function]?

One of the reasons to stay with is that you can look at any aspect of biology – in the development of organs, or how to put neurons together, or how circuits are made.

What are your favorite papers?

In science... you never look backward. Last year's literature, you don't even think about it... [One] paper that influenced others was the 1987 on gene targeting.1 But there is a 1982 paper that I sent to , and they refused it... [It] outlined the technology of gene targeting. I was quite offended by that [refusal]... The 1982 paper shows that the machinery to do homologous recombination is present in all cells.2

The more we delve into how we work; we learn how more complex we are.... I see that we are going to have to be working a long time, at least another 100 years. ...What frightens me is the desire for immediate gratification. If we try to appease that, we will sell short the whole system.

You recently made an interesting discovery

I hadn't seen a picture of the house [where I grew up], yet it was in my mind. Recently, I received a prize in Trento, near there. Mother had rented a house, north of the Dolomites [in the Alps]. So as part of this prize, they wanted a few pictures.... I found one of the house. It looks very similar to where I live now.

Do you plan to retire?

My wife says that I am going to die at the lab bench.

Christine Bahls can be contacted at 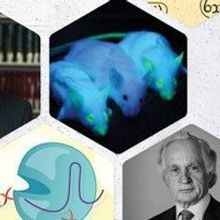