You were at Berkeley, the center of activism in the 1960s, during a tumultuous time. Do you recall it with nostalgia or regret?

Mainly pride. I don't indulge in nostalgia about that period because it was a terrible time for our country. It's very American: When you see something wrong, you try to fix it. The single most effective thing we did was on the day after the US invaded Cambodia, we got out our suit jackets and shirtwaist dresses – not clothes that any of us had worn since coming to Berkeley – and went to the synagogues and churches and by the end of Sunday we had 30,000 letters opposing the action. It made it longer to get a dissertation done, but it was an interesting, intense time.

Did you serve jail time for your political activities?

I was arrested once but I...

What do you say to scientists who disdain dirtying their hands with political debates?

I know a lot of scientists who feel that you must remain above politics and remain the dispassionate observer. But few of those people have ever had students' bodies returned to their parents without their heads. One is both a citizen and a scientist. I don't see there's a difference. But when it comes to science, being dispassionate is so important. If you're going to do politically involved science, you better do it damn well. You have to make your mistakes in private and correct them before you go public.

After your divorce in 1975, you went on record as saying, "I couldn't be a great scientist, a great mother, and a great wife ... something had to give." Do you advise young women to choose two of the three?

Absolutely not. Times have changed. Having three pregnant women in my lab at this moment, all of whom I support dearly, is proof of that. Today's culture expects men to contribute to child-rearing. In regards to flexibility, we're doing things better now in science, but it's still very tough for young mothers. Having ended up as a single mother, I don't want to see that with the gals I have in my lab. They're smarter, though; they don't try to do it all.

Your best friend died of cancer at 14. Was that the impetus for your chosen field?

I always hated cancer. It was a bad thing and I wanted to fix it. I recognized immediately that breast cancer could be approached from a quantitative manner. I came at the same approach of finding similarities between chimps and humans.

Is the rumor true that you named the first breast cancer gene, BRCA1, after Berkeley?

[Yes], but I also named it after breast cancer. When it came before the nomenclature board, I brought up only the breast cancer part. Thank God I wasn't studying at UC-Davis.

What was the 'eureka' moment like when you discovered that BRCA1 existed?

The 'aha' moment was a little later than you might expect. We had published the results in in 1990. But, there's always a trace of doubt in the back of my head. Then I went to a conference in Paris, and Gilbert Lenoir [now the director of Research, Gustave-Roussy Institute] was presenting his results. During one slide he asked me what I thought ... I was jetlagged and thought he was showing a slide of my data. He said, 'Au contraire.' It was his data, and it was so parallel to my own that it proved beyond any doubt what we had discovered. Now we had physical proof that our math was right.

What is the hardest thing about doing science?

We all know when we went into science that it takes a long time, but that doesn't make it less discouraging. It took us more than 15 years to prove that a breast cancer gene exists.

How do you want to be remembered?

Above all else I want to be remembered as a good mother by my daughter. 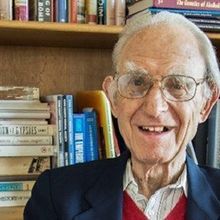