Growing cells outside the body began in 1907 with the work of Ross Harrison at the Johns Hopkins School of Medicine, and continued in the hands of Alexis Carrel and Montrose Burrows at the Rockefeller Institute. These investigators figured out the nutrient solutions that kept cells alive for extended periods of time and allowed them to make discoveries that revolutionized cell biology, genetics, biochemistry and immunology.

Soon after the National Cancer Institute was established in 1937, Wilton Earle began experiments in tissue culture there. Earle, along with colleagues Katherine Sanford and G.D. Likely, reported in 1948 that they had established "clone cultures" from single cells. Several years later, Earle received immortal "HeLa" cells, taken from the tumor of Henrietta Lacks (see p. 22), from George Gey at Johns Hopkins. The tissue culture flask pictured here, containing HeLa cells, dates from 1955; the inset of the cells under a light microscope dates from 1997.

Earle and colleagues would go on to use the HeLa cells in studies of how heterogeneous cells descend from an original malignant cell. Earle's most important work focused on chemical carcinogenesis in vitro, establishing among other things that malignancies usually did not occur suddenly, but rather evolved in different environments and at different rates. 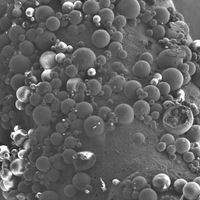