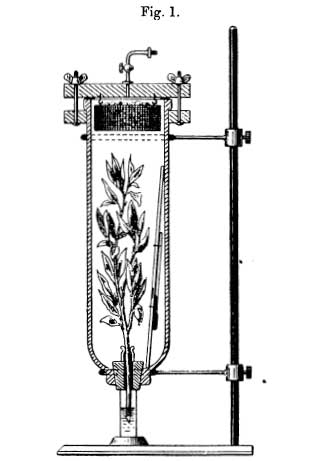 HEAVY LIFTING: Among the theories put forth by 19th-century scientists to explain the movement of water up a tree was the idea that pressure gradients inside leaves sucked water upward. Others insisted cellular conduits must function like pumps. Dixon and Joly, in 1895, discredited both of those proposals. They watched a branch move water against triple the normal atmospheric pressure and posited that tensile properties of water enable trees to lift the fluid without exerting any effort whatsoever. PHILOSOPHICAL TRANSACTIONS OF THE ROYAL SOCIETY BThe uppermost branches of a tree might sway several hundred feet in the air, yet they will receive a constant supply of water sucked out of the soil below. In the late 19th century, the world’s botanists were mired in fierce debate over this astonishing hydraulic feat, divided over whether and how trees expended energy to lift water against the force of gravity.

Inside of a tree, water courses from root to leaf through tiny conduits collectively called xylem, and almost all water not consumed by cellular processes evaporates, or transpires, through pores on the undersides of leaves. In a paper published in 1895 (Philos Trans R Soc B, 186:563-76), Dixon and Joly reported the results of an experiment to push back against that upward flow.

The pair encased a maple branch in a thick glass tube, sealed except for the end of the branch protruding down into a vial of water. With a pump, they raised the air pressure inside the tube to twice that of the atmosphere in an attempt to stop the water’s ascent. Yet, liquid in the vial steadily dropped over the course of an hour, evidence that the plant kept on transpiring. More air was pumped in, and at triple the normal atmospheric pressure, the branch still pulled up water. The same proved true with branches of sycamore and lime. Before Dixon and Joly could drive the pressure any higher, the glass tube shattered—“fortunately doing no harm,” they wrote, “but putting a stop to further experiments.”

A second, more technical experiment provided a crucial piece of explanatory evidence in the form of a new property of water. In a series of manipulations, Dixon and Joly showed that water in a tube could be placed under tension—the way pulling on a rope places it under tension. The two researchers, drawing together pieces of a number of earlier theories, proposed in full what would be known to posterity as the cohesion-tension theory. Inside the vasculature of a tree, they argued, water forms slender threads that stretch from roots to leaves. Transpiration—a cooling process enabled by the warmth of the sun—tugs at the end of the thread and pulls water upward.

Dixon and Joly did not get the last word on the matter. According to a history of cohesion-tension theory by Harvey Brown of the University of Oxford, Francis Darwin, son of Charles and an accomplished botanist, dismissively wrote that believing in the ability of water to bear tension “is to some of us equivalent to believing in ropes of sand” (Phys Perspect, 15:320-58, 2013). Even today, despite sophisticated experiments proving this peculiar property, and an understanding of the polar bonds between water molecules that account for it, xylem researcher Melvin Tyree says the idea sticks in the craw of engineers and even some dedicated plant biologists. “Fluids, by definition, are not supposed to have tensile properties.”