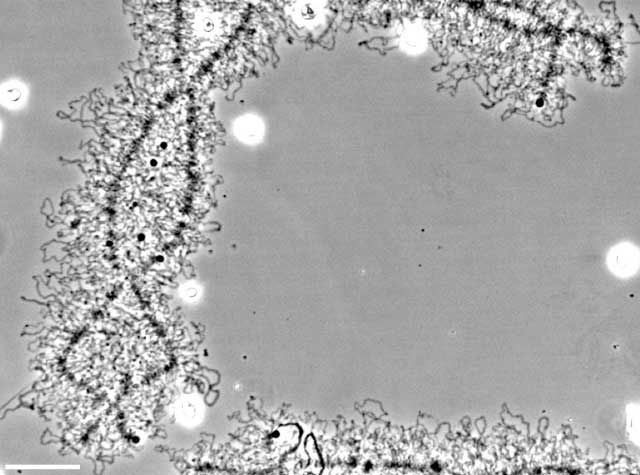 HOOPS AND LOOPS: The first observations of chromosomes in the lampbrush form were made in 1878 using stained sections of axolotl oocyte nuclei. Now, with phase contrast microscopy, scientists can observe the structures moving freely in solution, much as they would inside a developing egg cell. This chromosome, isolated from an axolotl oocyte and imaged in 2003, is almost one millimeter long. (Scale: 50 μm)GARRY MORGAN

In a laboratory in Kiel, Germany, in 1878, cytologist Walther Flemming saw something extraordinary through his microscope. He and a student were studying oocyte development using stained sections of nuclei from an axolotl, a type of salamander. In one of those sections, Flemming could make out long, thin objects with fiber-like protrusions that formed loops, giving the cellular structures a fuzzy appearance.

In 1882, he published his observations of these “merkwürdige und zierliche Anordnungen”—strange and delicate structures. As for what they were,...

At the time, researchers hadn’t yet identified the physiological unit of heredity. Although Flemming had described and named chromatin in 1879, it wasn’t until 1888 that Wilhelm Waldeyer coined the term “chromosome,” and scientists began making connections between the structures and genetic inheritance.

German anatomist Johannes Rückert had been observing the same structures that Flemming saw, but in oocytes from a catshark. “Rückert was able to recognize that what he was looking at was a genetic structure, rather than simply an unusual organelle in an unusual cell type,” Morgan says.

They were chromosomes, Rückert concluded, but in a peculiar state. For starters, they were big—up to 120 μm, he noted (they extend up to a millimeter in some species). And the tangle of side loops differed from the smoother appearance of somatic cell chromosomes. In a paper published in 1892, Rückert named the structures “lampbrush chromosomes,” for their resemblance to wiry brushes used at the time to clean oil lamps.

Since then, scientists have explored the structures in more detail. It’s now known that the lampbrush form is adopted by oocyte chromosomes in almost all animals, mammals excepted—perhaps owing to the spatially constrained development of mammalian embryos, Morgan says. Because the loops are sites of intense tran­scriptional activity, the structures are thought to play a role in oocytes’ synthesis of large quantities of protein prior to the rapid cell division associated with embryonic development.

With the genome of the axolotl to be published later this year, Morgan and other researchers are hoping to learn more about how the loops on lampbrush chromosomes might regulate gene expression. But even for geneticists not studying oocyte development, the lampbrush chromosome still holds appeal 140 years after its discovery, Morgan says.

Often in genetics, “you don’t really get a feeling for the physical reality of what’s going on,” he says. But with modern microscopy, researchers can observe these enormous chromosomes swishing around in 3-D space. “You can see that genes aren’t static structures—they have a mobility. It’s a fascinating thing simply to be able to look at them.”