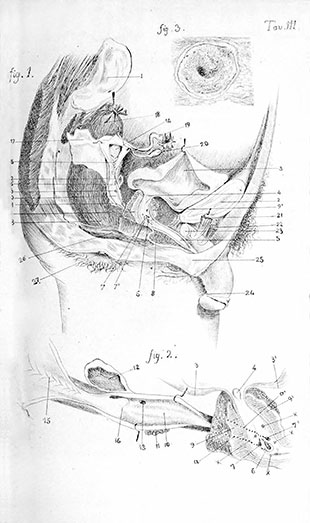 CONGENTIAL ADRENAL HYPERPLASIA DISSECTED: This drawing by pathologist Luigi De Crecchio, originally published in “A Case Report of Masculine Appearance in a Woman” in the journal Il Morgagni in 1865, shows the longitudinal views of the pelvis of a man named Giuseppe Marzo, and represents the first recorded anatomical report of congenital adrenal hyperplasia, a group of genetic disorders that can alter genital development and cause sexual ambiguity. In Marzo’s case, De Crecchio noted the presence of a penis and male urinary tract (5, 24), the absence of testicles, and the presence of underdeveloped ovaries (20) and fallopian tubes (19), a uterus (14), and a vagina (10).COURTESY OF WALTER MILLERIn 1865, Italian pathologist Luigi De Crecchio assisted with an unusual autopsy at the Hospital of the Incurables in Naples. Intrigued by what he had learned about the life of the 44-year-old man who had died of unknown...

Giuseppe Marzo was born a healthy baby girl in 1820. Although his mother noticed something odd about his genitalia at three months, Marzo continued to be raised as a girl until the age of four, when a surgeon pronounced that he was actually a boy whose testes had not descended. It would take another 40 years and an autopsy for the correct diagnosis to be made: congenital adrenal hyperplasia (CAH), a catchall term for genetic mutations that cause abnormal production of hormones by the adrenal glands, including hormones involved in genital development.

“Diseases of sexual development are actually rather common,” says Walter Miller, who specializes in pediatric endocrinology at the University of California, San Francisco, and who coauthored the first complete English translation of De Crecchio’s report, with a commentary, which appeared in Endocrinology in April (156:1210-17, 2015). Miller says that about 1 in 5,000 children are born with some sort of genital ambiguity.

Thanks to De Crecchio’s investigation, Marzo became the first recorded case of CAH. When De Crecchio’s colleagues opened up the dead man’s body, they saw that although he had a male urinary tract, he had no testicles, and all of his internal reproductive organs were female.  He had a uterus, fallopian tubes, a vagina without an external opening, and ovaries—though it was unclear if they functioned properly. Because of his anatomy, Miller says, these days Marzo would probably have been raised as a female after having surgery to open up the vagina and convert his penis into a clitoris. Marzo also would have been screened at birth for various forms of CAH, including 21-hydroxylase deficiency, which Miller says he likely had.

Despite the fact that Marzo’s adrenal glands were severely enlarged, the pathologists discarded them without closer analysis. De Crecchio was likely not aware that adrenal gland abnormalities could affect sex differentiation, a fact that was not well appreciated until the mid-1900s. “To me, it’s sort of sad to know that in the past 150 years, we have learned everything that De Crecchio did not know,” says Miller.

Marzo’s adjustment to manhood was difficult for him and his family. De Crecchio wrote that Marzo drank heavily, worked hard to be one of the guys, and though he was sexually active with women from a young age, it’s implied that he was unable to marry because his birth certificate indicated he was female.

At birth, Miller says, nurses, doctors, and parents often want to check a box—boy or girl—right away. But it’s not always so simple. Although we now have the medical knowledge to treat children born with CAH, Miller says, “society has not kept up with the science—not by a long shot.”