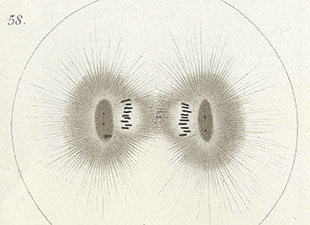 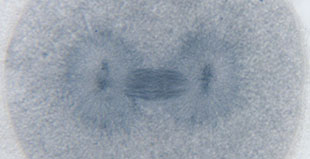 CELLULAR LINE-UP: Cell biologist Theodor Boveri’s artistic inclinations are clear from the images he drew for his scientific monographs. The slide here (above, lower), shows chromosomes lined up along the mitotic spindle during anaphase in a sea urchin egg—a close match to the diagram in his publication (above, top). Notes marked in India ink on the edges of the slides, prepared between 1901 and 1914 and rediscovered nearly nine decades later during a cellar clean-up at the old Zoological Institute in Würzburg, Germany, where Boveri had worked, helped identify their source. “At that time there were no technicians; he prepared all these slides by himself,” says Ulrich Scheer, a professor emeritus at the University of Würzburg who found Boveri’s slides after they were thought to have been destroyed in WWII. ULRICH SCHEER, UNIVERSITY OF WURZBURG On March 16, 1945, an air raid on the city of Würzburg, Germany, killed nearly...

In 1992, the Zoological Institute in Würzburg, part of the Theodor Boveri Institute of Biosciences at the University of Würzburg, underwent another transition, moving quarters to a more modern, multidisciplinary facility at the university’s Biocenter. After the move, Ulrich Scheer, then chair of the zoology department, and his colleagues set out to clean the institute’s cellars, cluttered with years of academic detritus.

The basement “was pure chaos,” Scheer recalls. But as he sifted through hundreds of folders of microscope slides, a few stood out. Four of the book-shape folders contained nearly 700 century-old glass slides, prepared by the institute’s very namesake, cell biologist Theodor Boveri, and his wife and colleague Marcella O’Grady. Carefully labelled and dated by Boveri himself, the slides represent some of Boveri’s seminal experiments with roundworms (Ascaris spp.) and sea urchin embryos, which helped him develop his theories on the cellular role of centrosomes.

The slides had been presumed destroyed in the 1945 bombing, says Scheer. But the ink handwriting on these specimens caught his eye. “Most [of the folders] contained student projects, but on some folders I noticed the handwritten notes from Boveri,” says Scheer. “I knew the handwriting because he had written several letters related to his centrosome research, including some to [Wilhelm] Röentgen, the discoverer of X-rays, who was a very good friend of his.” Having read those letters, Scheer recognized the significance of the slides. “I was really delighted to find them,” he recollects.

Boveri’s studies of the centrosome began at the end of the 19th century. In 1887, he published a short communication detailing the organelle’s involvement in organizing the mitotic spindle and other cellular structures during cell division. Although his early research relied on living Ascaris and sea urchin eggs, he later began to focus on slicing sea urchin eggs into sections, a process accomplished by wrapping a mass of eggs in shed salamander skin, then dehydrating and sectioning the sample much like a larger piece of tissue.

Several of the slides Scheer stumbled upon represent these later investigations, which helped to elucidate the role of the nucleus and chromosomes in inheritance. Boveri and O’Grady likely prepared the samples during their research stays at the Zoological Station in Naples at the turn of the 20th century. The slides “bear testimony to Boveri’s important discoveries that chromosomes are the carriers of heredity, that they are genetically different and that proper embryonic development depends on a correct complement of chromosomes,” Scheer wrote in a review in the Philosophical Transactions of the Royal Society B (doi:10.1098/rstb.2013.0469, 2014).

Having survived the bombing of an entire city and multiple moves from buildings where they were housed, the fragile glass slides are now part of a permanent display in the foyer of the Biocenter.