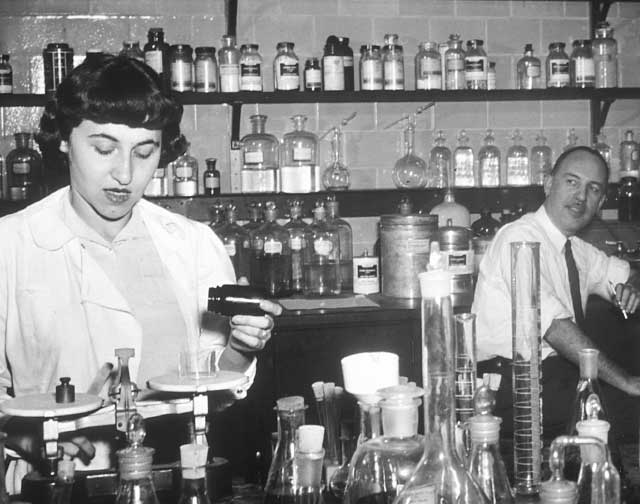 SCREEN TIME: By 1950, Jonathan Hartwell (right) and his team were regularly screening plant extracts sent to the National Cancer Institute by botanists. Initially, the NCI investigators tested the crude extracts in mice harboring natural mouse tumors. Over the next few decades, their methods evolved with the technology to include human cancer cell lines and immunosuppressed mice that carried human cancers. (Upon request from The Scientist, the NCI tried to identify the pharmacy technician in the photo, but could not find her name.)FLICKR, NATIONAL CANCER INSTITUTE

Update (June 13): Upon asking readers on social media for help in identifying the mystery researcher in the photo, The Scientist has identified her as biochemist Sylvy Kornberg. Read about her life.

Organic chemist Jonathan Hartwell joined the National Cancer Institute (NCI) to head up a natural products division in 1938, not long after the agency was founded. He’d read plenty...

In 1955, the NCI set up the Cancer Chemotherapy National Service Center to investigate all manner of compounds with potential cytotoxic activity, and in 1960, Hartwell helped broker a partnership with the United States Department of Agriculture (USDA) to have its botanists send plants to Hartwell’s team for screening. Often, extracts that tested positive would be shipped to academic labs for purification of the active compound, which would then be sent back to NCI for retesting, says chemist David Newman, who led NCI’s Natural Products Branch from 2005 to 2015.

Although cancer researchers had tested various chemicals and “potions” inspired by traditional medicines, Hartwell’s methodical approach was novel, Newman adds. “People were working all over the world, but not in systematic ways.”

The program soon began to yield fruit. For instance, in August 1962, USDA botanist Arthur Barclay collected bark from the Pacific yew tree (Taxus brevifolia) in Washington State, and work by the NCI group led to the eventual discovery and approval of taxol for treating ovarian cancer. Two analogs of camptothecin, a cytotoxic alkaloid isolated from the bark and stem of a Chinese xi shu, or “happy tree” (Camptotheca acuminata), are now used to treat a variety of cancers. And Hartwell’s team helped develop vinblastine and vincristine, identified in crude extracts from rosy periwinkle (Catharanthus roseus), for the treatment of lymphoma and childhood leukemia, respectively, in the 1960s, effectively changing what had been death sentences into treatable cancers.

Hartwell supplemented what he and others were learning from their modern research with a massive literature search, including ancient Chinese, Egyptian, Greek, and Roman texts. “He was very interested in folkloric use of plants,” says James Graham of the University of Illinois at Chicago (UIC). “He considered that a very useful strategy” for finding promising leads. (The happy tree is used as a cancer treatment in traditional Chinese medicine, for example.) Beginning in 1967, Hartwell compiled his research into a series of articles in the journal Lloydia (now the Journal of Natural Products) as well as into a book, Plants Used Against Cancer (1982). All told, the collection included information on more than 3,000 species of plants with alleged anticancer activity.

“If you look at the source of drugs used in cancer,” Newman says, “60-plus percent of them are either a natural product, a modified natural product, or depend upon what is known as a natural product pharmacophore”—in other words, a synthetic version of a natural molecule. Hartwell was “the leader” in organizing the discovery of natural products to fight cancer, Newman adds. “He was a prophet before his time. Prior to that, nobody had really looked.”