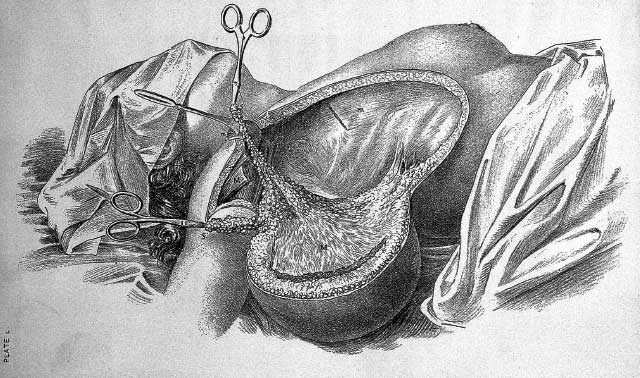 THE CUT: William Halsted’s “radical mastectomy” was believed for much of the 20th century to be the best defense against breast cancer. This illustration in his 1894 paper on the procedure depicts the removal of large volumes of tissue around the tumor. It would be decades before the medical community would begin to replace the procedure with more-targeted surgeries, together with cell-killing methods such as radiotherapy and chemotherapy.WELLCOME COLLECTION

On May 28, 1889, a 38-year-old woman was placed on an operating table at the Johns Hopkins Hospital in Baltimore. Patient L.S. was married, with ten children, and had a cancerous tumor occupying most of her left breast. That day, and in subsequent operations over several months, her surgeon, William Halsted, painstakingly sliced out not only the tumor, but the pectoral muscle behind it, and the lymph nodes in her armpit. Then, he grafted skin—likely from her thigh—to patch...

The procedure was unprecedented in the U.S. Although records of mastectomy-like procedures stretch back to at least the second century A.D., American physicians typically considered breast cancer patients doomed from the outset, and prescribed ointments and other less invasive measures. But L.S., or Case I, as she would be dubbed in Halsted’s 1894 article on 50 such cases, marked the beginning of a sea change in breast cancer treatment. His “was a seminal paper of the day,” says Kirby Bland, a surgeon and oncologist at the University of Alabama at Birmingham.

Halsted argued that excising a large volume of tissue could reduce cancer’s spread, a poorly understood phenomenon at the time. Although L.S. died from cancer of the other breast less than two years after her operation, Halsted highlighted his approach’s success in avoiding “local recurrence” of the disease. He also suggested that the procedure promoted patient survival (although his broader study only measured survival after three years—not much longer than the median survival time for untreated patients).

Halsted’s conviction was contagious. By the early 20th century, his so-called “radical” or “complete” mastectomy had become the standard of care. For decades, surgeons followed his instructions, entirely removing the breast and associated tissue, and replacing skin with an unsightly graft—an outcome that caused considerable distress for patients, Bland says. Some also complained of disability in their arms after the operation—a concern Halsted dismissed in his paper noting that, with an average age of 55 years old, “these patients are old . . . They are no longer very active members of society.”

Even in Halsted’s time, some doctors doubted the procedure’s efficacy. A contemporary, Rudolph Matas, wrote in 1898 that the terms “complete” and “radical” were “anatomical misnomers . . . and are illusory if used in the sense that they root out the evil with any degree of certainty.”

In 1971, a team led by American surgeon Bernard Fisher began a large clinical trial comparing Halsted’s mastectomy with smaller, lump-removing operations. The team found no significant differences in survival, prompting the gradual adoption of a less destructive, breast-conserving approach to surgery, together with newer treatments. “Today . . . the only time you use [a radical mastectomy] is when you have failed with chemotherapy or radiation,” Bland says.

Still, with its focus on precision and aseptic techniques, Halsted’s forward-looking work in surgery marked “a huge change in medical philosophy,” Bland adds. Halsted himself concluded his 1894 paper by imploring surgeons in all fields to hone their operating skills, wryly noting that surgeons would someday “contemplate with astonishment some of the handy, happy-go-lucky methods for intestinal suture which are now so much in vogue.”