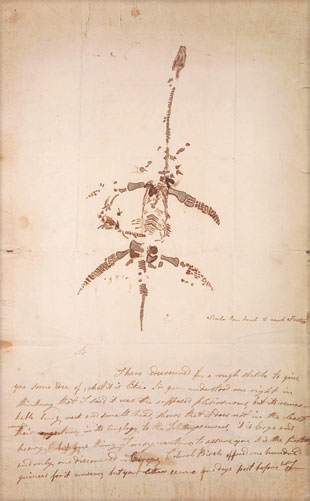 BREAKING THE STRATA: When Mary Anning excavated and reconstructed the first near-complete skeleton of a plesiosaur, she quickly realized she had unearthed something special. Anning drew a detailed sketch of the specimen in this letter, dated December 26, 1823, but never received any official credit for the discovery. WELLCOME COLLECTION, CREATIVE COMMONSAs a working-class woman in 19th-century England, Mary Anning faced stacked odds. Born into poverty in 1799, she received no formal education and quite literally scraped a living from the sea cliffs near her Dorset home, selling whatever fossils she could find. Yet Anning made some spectacular discoveries and taught herself so much that she became an expert paleontologist, contributing as much scientific knowledge about the creatures of the Mesozoic as the most eminent gentlemen geologists of the day.

“More than anyone else at the time, she showed what extraordinary things could turn up in the fossil...

Growing up on England’s rocky southern coast, Anning first learned the skills of finding and cleaning up fossils from her father, a cabinetmaker and occasional fossil hunter who sold them as curiosities to tourists. When he died in 1810, the family continued the trade to eke out a meager income. A year later, Mary’s brother found a skull protruding from beneath a cliff, and, slowly, Mary excavated an almost complete skeleton of a long-snouted, dolphin-like reptile, later named Ichthyosaurus, or “fish lizard,” by Henry de la Beche.

Over the next decade, Mary forged a reputation as a sharp-eyed fossil hunter, braving falling rocks to find and expertly reconstruct the fragmented skeletons of long-lost creatures. “[T]o her exertions we owe nearly all the fine specimens of Ichthyosauri of the great collections,” declared the Bristol Mirror newspaper in January 1823.

Then, that December, Anning excavated something even more extraordinary: a strange 9-foot-long creature with, in the words of William Buckland, “the head of a Lizard, . . . the teeth of a Crocodile; a neck of enormous length, resembling the body of a Serpent; a trunk and tail having the proportions of an ordinary quadruped, the ribs of a Chameleon, and the paddles of a Whale.” It was an almost complete skeleton of the barely known Plesiosaurus, a new family of fossil reptile that had roamed the seas in the early Jurassic.

“She was brilliant when it came to extracting and reconstructing the fossils, but she also had enough experience to know straightaway if something was unique,” says Torrens. Anning received no mention at the Geological Society meeting in London, where the discovery was officially announced the following year, however, or in the subsequent scientific paper. “She was passingon her knowledge to men, who got all the credit,” Torrens says.

Anning went on to find a flying reptile (Pterodactylus macronyx), an intermediary between a shark and a ray (Squalo-raja), and two more near-complete plesiosaur skeletons. She became such an expert that she was visited by pioneers of paleontology such as Buckland, Gideon Mantell, and Richard Owen, whose famous achievements were built partly on her painstaking work. And although she was not named on any scientific paper, her contribution was recognized by de la Beche in 1830, when he gave her all proceeds from the first version of his famous illustration Duria Antiquior—a reconstruction of the strange and wondrous world of ancient Dorset, which Anning had helped reveal.