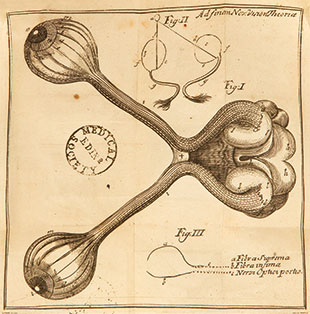 MISSED CONNECTIONS: William Briggs’s illustration in Nova visionis theoria depicts how he thought vision occurred. As drawn in Fig. II (above, top), he held that the optic nerves from each eye remained distinct, “for that the nerves. . . cross one another. . . is not to be imagined; but those that are in the thalami optici on the right side run distinctly to the right eye, and those on the left accordingly.” In Fig. III, he depicted how tension in the thalamic fibers conveyed visual input as “vibrations” to the nerves, like vibrations in a spider’s web. Both ideas turned out to be incorrect, yet his detailed anatomical surveys provided the foundation for much of the future study of the eye. COURTESY OF THE ROYAL COLLEGE OF OPHTHALMOLOGISTSIn 1663, budding ophthalmologist William Briggs, just 13 years old, enrolled at Corpus Christi College in Cambridge, England, where he...

As a personal physician to King William III, Briggs was a prominent medical professional in 17th-century England. Despite his reputation as a doctor, he is mostly remembered “as a sort of footnote in Newton’s life,” says ophthalmologist Daniel Albert of the University of Wisconsin–Madison. “His major contribution was to get Newton thinking about vision.”

Briggs’s own theories of vision culminated in his second book, Nova visionis theoria, “A New Theory of Vision.” Published in 1685, the 80-page vellum-bound manuscript included two case studies of patients with different forms of blindness and a 1681 paper, presented to the Royal Society of London, in which Briggs outlined his theory of the basis of binocular vision—how information from a pair of forward-facing eyes combines to form a single image.

Briggs maintained that fibers from the two optic nerves do not cross within the optic chiasm, but instead form two streams that stay within the same cerebral hemisphere of each eye, suggesting that the crossing-over of nerves was not needed for binocular vision. He compared the anatomy of human eyes to that of animals with eyes on either side of their head, writing: “In many fishes the case is clear, where the two nerves are joined only by simple contact, and in the chameleon not at all . . .”

In a letter that prefaced Nova visionis theoria, Newton said the book advanced two fields at once, both anatomy and optics. He praised the anatomical work and called Briggs’s theory “most ingenious.”

“The fact that Newton would endorse the book and think it of sufficient merit to write a very favorable foreword would undoubtedly reflect very positively on the book,” says Albert, who translated Nova visionis theoria from Latin in 1991 with Jeffrey Wills.

However, Newton disagreed with several of the ideas proposed and “destroyed Briggs’s ‘theory’” in their personal correspondence, according to the preface Albert penned to introduce his translation. For example, regarding the comparison of fish, chameleon, and human eyes, Newton replied: “In those animals which do not look the same way with both eyes, what wonder if the nerves do not join?” Others voiced harsher opinions, Albert wrote. Scottish physicist David Brewster wrote that Briggs’s theory displayed “neither sagacity nor genius”; German ophthalmologist Julius Hirschberg called it “no theory at all.”

In 1704, more than 21 years after his exchanges with Briggs, Newton published his own ideas on the origins of binocular vision in Opticks, proposing the idea of semidecussation, or a partial crossing-over of the optic nerves.

Despite its inaccuracies, Nova visionis theoria “paved the way for Newton’s brilliant concept of a semidecussation of the optic nerves,” Albert wrote. It “bridged the vague and imprecise descriptions of previous generations of anatomists to more accurate modern concepts.” 