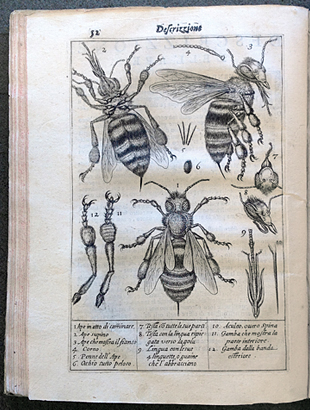 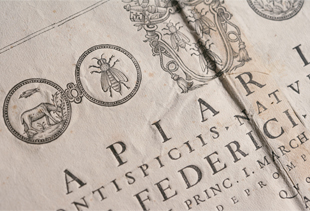 MICROSCOPY ON PAPER: The first published record of microscopic observations was printed in the book Apiarium in 1625 (above, lower). Although the authors, Italian naturalists Federico Cesi and Francesco Stelluti, described the anatomy of bees in their text, the first microscopy illustrations were published five years later in Stelluti’s book, Persio. The arrangement of the bees in his illustration (above, top) echo the trio of bees in the family crest of Maffeo Barbarini, also known as Pope Urban VIII. The scientists’ tribute to Barbarini is evident also in their descriptions of the bees as Urbanas (domestic) and Barbaras (rural). According to a 1970 translation of Apiarium by Clara Sue Kidwell, Cesi and Stelluti wrote: “You have distinguished Urban bees by their customs, virtue, worthiness and barbarian bees by their swarms, purity, and harmony in singing.”University of Michigan Library (Special Collections Library); Courtesy History of Science Collections, University of...

Around the turn of the 17th century, humans’ narrow, mesoscale view of the world was undergoing a dramatic expansion. Not only was the telescope invented—allowing people for the first time to peer into space at distances we still find hard to fathom—but the microscope as well. And standing in the middle of all these technological advances was Galileo Galilei, remembered chiefly for his contributions to the former invention.

“Many people do not realize that Galileo was indirectly responsible for the first publication of observations made with a microscope,” says Kerry Magruder, the curator of the History of Science Collections at the University of Oklahoma. People often think of Robert Hooke’s famous sketch of a flea or Anton van Leeuwenhoek’s descriptions of cells as the first microscopic publications, but a decade before either man was born, a pair of Italian scientists printed an obscure book describing what they saw down the eyepiece of Galileo’s instrument.

Federico Cesi and Francesco Stelluti were leading scientists in their day. Cesi had founded a scientific organization in Rome called the Academy of the Lynxes, and both Stelluti and Galileo were members of the club, devoted to exploring nature and sharing observations. Galileo wrote to Cesi in 1624 describing his microscope: “I have contemplated a great many animals with infinite admiration; among them, the flea is most horrible, the mosquito and the moth are beautiful; and with great satisfaction I have seen how flies and other tiny creatures can walk attached to mirrors, and even upside down. But Your Excellency will have occasion to observe thousands and thousands of details, of which I request you to notify me of the most curious things.”

Stelluti and Cesi used Galileo’s compound microscope to view never-before-seen anatomical structures of bees, described in their 1625 text Apiarium—marking the first published microscopic discoveries. Seeking a powerful patron, the duo chose bees to honor Maffeo Barbarini, a cardinal and friend of Galileo whose family crest was a trio of bees, and who had been elected Pope Urban VIII in 1623. “The origins of classical microscopy are embedded in diplomacy,” says Magruder.

Only six copies of Apiarium are known to exist, one of which is at the University of Oklahoma. The text will anchor an upcoming exhibit on Galileo at the university’s libraries this year. Magruder says that one of the striking aspects of the book is that the authors used a tabular format to organize information, which offered a means of visually representing their understanding of nature.

Several years after the publication of Apiarium, Stelluti followed up with another book, Persio, in 1630, this time mingling literature and natural history. In the same year, Cesi died at the age of 45, and the Academy of the Lynxes soon dissolved without his leadership.

Magruder points out that “it’s remarkable that the lynx emblem, which was chosen because of the lynx’s reputed vision at night, turned out to be a metaphor immediately extended by Galileo’s microscope and telescope.” 