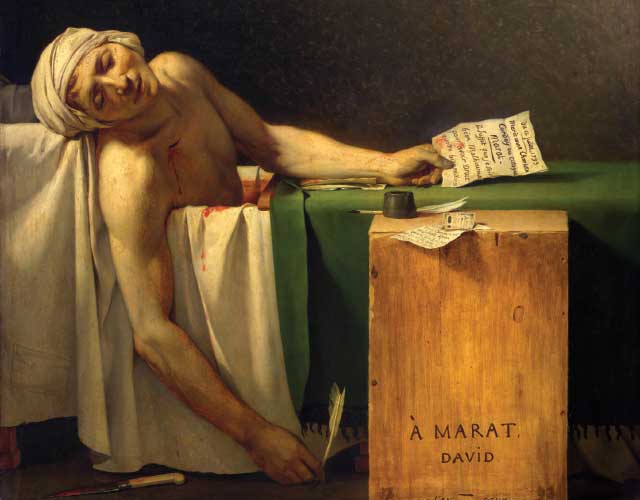 AN IMPERFECT DEPICTION: Jean-Paul Marat was described as ugly and deformed, but in the famous painting by Jacques-Louis David, “instead of an emaciated figure with ugly skin lesions all over his body, we see almost this classical figure,” notes Toby Gelfand of the University of Ottawa. This choice may reflect more than aesthetics, he says, for physical symptoms such as Marat’s were seen as reflecting mental problems, too—and perhaps as incompatible with a heroic “friend of the people.”PAINTING BY JACQUES-LOUIS DAVID, WIKIMEDIA COMMONS

French radical Jean-Paul Marat famously died in his bathtub in 1793, stabbed by Charlotte Corday to put an end to his revolutionary activities. “I killed one man to save 100,000,” Corday told a court before she was executed just days after murdering him.

But before he became a revolutionary and then a martyr, Marat was a well-regarded physician and scientist. Born in 1743 in what...

In 1776, Marat returned to Paris, where he became a physician to the aristocracy. He also began to conduct scientific experiments—some together with Benjamin Franklin—and published books on the nature of fire, light, and electricity. Eventually, he gave up his work as a doctor to focus on these subjects. He argued, for instance, that fire was not a form of matter, as then believed, but an “igneous fluid.”

The French Academy of Sciences gave Marat’s research a lukewarm reception. In a letter to a friend, he wrote: “To admit the truth of my experiments was to recognize that they [the academy’s members] had worked for forty years on wrong principles. . . . Accordingly, it formed a veritable cabal against me.”

In 1788, Marat changed careers again, this time giving up experimentation in favor of politics. He started his own newspaper and emerged as one of the most radical voices of the French Revolution. Around this time, Marat was struck with a skin disease, “either concurrent with or aggravated by the times he spent hiding from his political enemies in the sewers of Paris in 1790,” Josef Jelinek, a dermatologist at New York University Langone Health, wrote in The American Journal of Dermatopathology in 1979. Jelinek hypothesized that Marat was afflicted with dermatitis herpetiformis—a condition characterized by an itchy rash that would not be described for another century.

During Marat’s lifetime, medicine as practiced in France was still widely humoralistic—based on the belief that disease arose from an imbalance in bodily fluids, says Toby Gelfand, a medical historian at the University of Ottawa. Treatments sometimes aimed to encourage the body to expunge fluids, such as pus, saliva, or blood. This may have been the reason why Marat was known to use baths as a treatment for his skin disease; two possible ingredients would have been mercury and sulfur, Gelfand says. Marat was taking one such medicinal soak when Corday stabbed him to death.