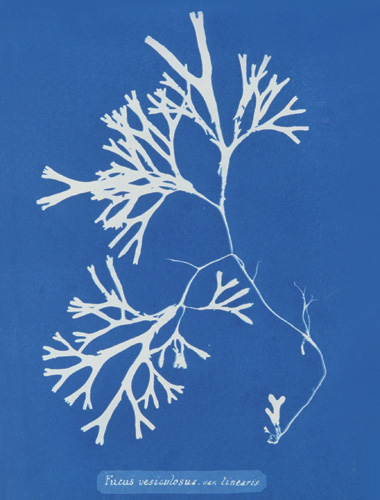 TRUE BLUE: Digital copy of the cyanotype of Fucus vesiculosus var. linearis, scanned from the edition of Photographs of British Algae: Cyanotype Impressions, Part XI, once owned by John Frederick William Herschel, inventor of the cyanotype process and neighbor of Anna Atkins. The volume, which now resides at the New York Public Library, is one of only 13 extant editions of the book.NEW YORK PUBLIC LIBRARY

In 1842, Anna Atkins, a 43-year-old amateur botanist from Kent, England, began experimenting with a brand-new photographic process called cyanotype or blueprint. With the utmost care and under minimal ambient light, Atkins arranged algae specimens collected from around the British Isles on a sheet of glass and placed it on top of paper coated with photosensitive iron salts, using another sheet of glass to hold the algae in place. After the prepared specimen had lain in the sun, the exposed areas of the...

Atkins learned the cyanotype process directly from its inventor, neighbor and family friend Sir John Frederick William Herschel. Within a year of beginning to experiment with the new technique, she published the first volume of Photographs of British Algae: Cyanotype Impressions—a collection of more than 200 algae images considered to be the very first photographically illustrated book.

Her work is celebrated not only for its remarkable artistry, but also for being at the forefront of a revolution in scientific illustration. Twenty years before her foray into photography, Atkins had helped her father, prominent Victorian scientist John George Children, by illustrating his English translation of Lamarck’s Genera of Shells.  Although Atkins’s meticulous drawings are testament to her artistic skill—“they suggest somebody who really, really studied things closely,” says art historian Carol Armstrong of Yale University—Atkins seemed to be frustrated with the limitations of hand-drawn illustrations. As she wrote in the introduction to British Algae, “The difficulty of making accurate drawings of objects as minute as many of the Algae and Conferae, has induced me to avail myself of Sir John Herschel’s beautiful process of Cyanotype, to obtain impressions of the plants themselves.”

At a time when illustrations would often reflect the artists’ own ideas of species relatedness and natural order, photography held a mirror to nature to let things reveal themselves. Preserved in Atkins’s blueprints are not only the generic features of algal species emphasized in illustrated guides, but also the wrinkles, folds, and rips that made each specimen she collected unique.