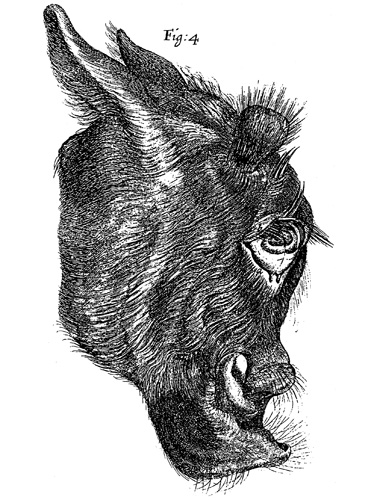 MONSTROUS HEAD: This profile of a deformed colt accompanied a paper, published on July 3, 1665, in Philosophical Transactions, describing Boyle’s use of ethyl alcohol to preserve the head, which Boyle had “hastily and rudely cut off” for further study. PHILOSOPHICAL TRANSACTIONS (1665-1678)

On March 6, 1665, Henry Oldenburg, secretary of the fledgling Royal Society of London, published the first volume of the Philosophical Transactions of the Royal Society of London—now the longest-running scholarly journal dedicated to science. Oldenburg selected the material for the journal from the voluminous correspondence addressed to him by members of the Royal Society, founded 5 years earlier, and often summarized the material himself. Among Oldenburg’s frequent correspondents was the highly esteemed “noble philosopher” Robert Boyle. Although the Anglo-Irish scientist is best known for Boyle’s Law of gases, his first contribution to Philosophical Transactions was actually Oldenburg’s summary of Boyle’s second-hand account of a deformed...

In the paper titled “An Account of a Very Odd Monstrous Calf,” Oldenburg described how a butcher, having killed his fatted cow, found her womb full and opened it. Inside was a calf, “whose hinder Leggs had no Joynts, and whose Tongue was, Cerberus-like, triple . . .” From its sternum sprang a strange, greenish, stony growth. By investigating such examples of development gone awry, scientists of the era aimed to learn more about normal development, says science historian Michael Hunter of Birkbeck, University of London. In a later issue, Boyle described a colt (shown at right) with a head that had developed only one huge eye connected to one optic nerve, but which contained two corneas, two pupils, and two irises. It had no nose, but an empty sac erupted from its forehead, which Boyle hypothesized was an aborted attempt to grow the missing nose.

Although descriptions of malformed animals may seem an odd diversion for Boyle—who by 1665 had already published his ideal gas law—his scientific career was wide-ranging and prolific, says Hunter. The story of the calf, probably selected for publication by Oldenburg, was followed by a brief description of Boyle’s seminal treatise, New Experiments and Observations Touching Cold, in which he first presented the concept of an “absolute cold.” Around that time, Boyle also demonstrated that “Spirit of Wine,” or ethyl alcohol, could be used as a preservative for tissues. By dunking the colt’s deformed head in alcohol, Boyle showed that animals “may be preserved long enough, to afford Anatomists the opportunity of examining them.” Alcohol remained the method of choice for specimen preservation until late in the 19th century.

Boyle was an extremely influential figure during the Royal Society’s early years, but the Society influenced him as well. Its mania for lists led Boyle to organize his experiments in list form in his famous treatise on cold. At the Society’s founding in 1660, Boyle drew up a seemingly fanciful list of 24 future scientific achievements, and managed to presage everything from scratch-and-sniff technology (“Varnishes perfumable by Rubbing”) to Kevlar body armor (“making Armor light and extremely hard”). In contrast, Boyle structured The Sceptical Chymist, his landmark book on the nature of matter, as a dialog among competing philosophers, and addressed New Experiments Physico-Mechanicall, Touching the Spring of the Air, and its Effects . . . to his nephew in letter form.