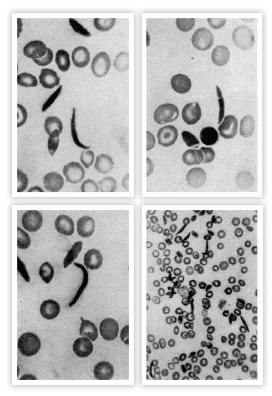 SICKLED CELLS: Images of Walter Noel’s blood that appeared in James Herrick’s 1910 paper. Herrick wrote that he reported Noel’s case “because of the unusual blood findings, no duplicate of which I have ever seen described.”
J.B. HERRICK/YALE JOURNAL OF BIOLOGY AND MEDICINE

On the day after Christmas, 1904, Walter Clement Noel staggered into Presbyterian Hospital in Chicago, suffering from respiratory distress. An intern, Ernest Irons, carried out routine tests on Noel’s blood, stool, and urine. The patient’s blood contained “many pear-shaped and elongated forms,” Irons noted. Over the next two and a half years, Irons and his supervisor, James Herrick, attended to Noel, an international student from the West Indies island of Grenada, for symptoms ranging from fever to arthritis to anemia. In 1910, Herrick published the first paper reporting on Noel’s condition, a case of what would come to be known as sickle cell anemia.

Noel had traveled to United States to study at the renowned Chicago College of Dental Surgery (since absorbed into Loyola University). Herrick described him in his case study as an “intelligent negro of 20.” Noel belonged to a planter class family that was fairly wealthy, enabling him to seek care at Presbyterian, a private hospital now called Rush University Medical Center. Savitt notes that Noel’s stay in the US also coincided with a time of increased opportunity for black Americans, including improved access to education and medical care.

Herrick wrote in his paper that he saw a “large number of thin, elongated, sickle-shaped and crescent-shaped forms” in Noel’s blood. Herrick and Irons considered diagnoses ranging from malaria to syphilis to intestinal parasites, but those ailments didn’t adequately explain what they saw under the microscope, or the patient’s strange constellation of symptoms. April 1907 was the last time Herrick and Irons saw Noel, who returned home to Grenada later that year.

Three months after Herrick’s paper appeared in the Archives of Internal Medicine in 1910, another description of sickle cell anemia, this one in an African-American housemaid and cook, Ellen Anthony, appeared in Virginia Medical Semi-Monthly. Another case study was published in 1915, and a fourth in 1922, when the disease was finally given a name by Verne Mason, then a resident at Johns Hopkins Hospital. By that time Noel, a practicing dentist, had died from pneumonia, entirely unaware of his sickle cell status.

In 1949, Pauling reported that patients with sickle cell anemia have an abnormal form of hemoglobin, making it the first condition known to stem from a defective protein. Seven years later, Vernon Ingram and his colleagues identified the specific amino acid change responsible.

The disease is more common in people with ancestors from Greece, Turkey, Italy, India, the Arabian Peninsula, parts of the Caribbean, South and Central America, and Africa—1 in 12 African-Americans carry a single copy of the gene variant. While one copy of the gene variant is protective against malaria, two copies cause sickle cell disease. Current treatment options range from bone marrow transplants to pain medication, and the disease is a target of some gene therapies now in development (see “CRISPR Inches Toward the Clinic,” The Scientist, August 2018).

“What Herrick did was certainly groundbreaking,” says Savitt. “He started it—he and Irons.”