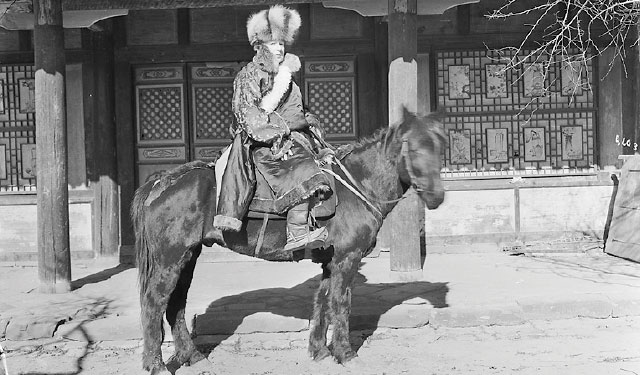 FLOWER POWER: Joseph Rock, dressed in Tibetan clothing, prepares to explore. HARVARD-YENCHING LIBRARY OF HARVARD COLLEGE LIBRARY, HARVARD UNIVERSITYOn a botanical expedition to China’s Yunnan Province in 1925, explorer Joseph Rock and his entourage were unexpectedly ambushed by a group of bandits. The caravan, which included servants, porters, military guards, and research assistants, retreated to a nearby hill and waited, weapons ready. Another, less-well-armed caravan traveled the same path, and the bandits chose to prey on it instead. Rock watched through his field glasses, and witnessed native soldiers on horseback appearing out of nowhere to disperse the bandits.

Rock’s adventures in China’s far west weren’t always so precarious. The Austrian-American also enjoyed fine dinner service and hot baths in a collapsible tub, even in remote desert regions. According to a contemporaneous National Geographic article, he once said, “You’ve got to make people think you’re someone of importance if...

The US Department of Agriculture, Harvard’s Arnold Arboretum and its Museum of Comparative Biology, and other institutions paid Rock’s way to Asia to collect plant and bird specimens and other treasures, and he spent three decades on the task. He first went to Assam in northeast India and the countries then known as Burma and Siam in 1920 to collect seeds of the chaulmoogra tree (Taraktogenos kurzii) and related species, which produced a substance used to treat leprosy. Rock was then sent to China, where he gathered tens of thousands of herbarium specimens.

Many of Rock’s herbarium sheets—pieces of plants pressed and labeled on paper—represented the first documentation of the enclosed species, Michael Dosmann, the keeper of the living collections at Arnold Arboretum, tells The Scientist. These sheets are now used to identify species that have gone extinct in the regions of western China that Rock explored. “The land and the world has changed since he was in Asia almost 100 years ago,” Dosmann says. “We’re using his specimens to determine what you could return and restore.”

Rock “wasn’t solely a botanist,” Dosmann says. “His ability to document language and understand culture was unprecedented.” The explorer wrote two histories of the Naxi people of northwestern Yunnan Province, along with a 1,094-page Naxi–English dictionary; documented conflicts between Hui Chinese forces and Ngolok Tibetans; and photographed people of various ethnic groups. National Geographic published many of his travel diaries between 1922 and 1935.

Rock employed considerable visual skills not only in identifying plants and deciphering Naxi pictographs, but also in compiling maps, writes Tibetan and Himalayan studies scholar Michael Aris of Oxford University in his 1992 book, Lamas, Princes, and Brigands: Joseph Rock’s Photographs of the Tibetan Borderlands of China. “His photographs, too, often taken under very difficult circumstances, provide eloquent testimony to his drive for classifiable visual evidence.”

“Rock was a bit of a polymath,” Dosmann says. “He was incredible.”