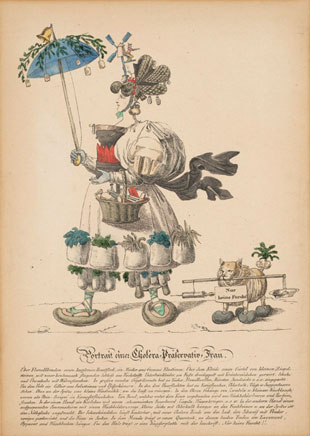 WARDING OFF CHOLERA: Printed in Nuremberg, Germany, around 1832, this depiction of a woman’s attempts to repel cholera satirizes the abundance of dubious advice about prevention. Little was known about the disease when it first arrived in Europe, but by the end of the 19th century, physician-scientists had identified the culprit bacterium, rendering homemade prevention methods obsolete.THE FRANCIS A. COUNTWAY LIBRARY OF MEDICINE, HARVARD MEDICAL LIBRARYAll the way from the Ganges River delta in India, an unwelcome visitor arrived in Europe in 1831. Its victims suffered violent cramps, vomiting, and diarrhea, along with dehydration so rapid and severe that their skin was rendered a deathly blue. Many died within hours of the first symptoms.

Cholera was one of the most devastating diseases to hit Europe in the 19th century, with a series of epidemics taking hundreds of thousands of lives. And because its cause was a mystery,...

Leading theories at the time held that the disease was caught through exposure to foul or filthy air, so measures designed to repel cholera by purifying the air were particularly common, as depicted in this satirical cartoon of a woman extravagantly equipped with chlorinated lime, garlic, various herbs, and vinegar bags. “Anything that tended to change the quality of the air was plausible as a preventative measure,” says Hamlin.

But by the 1850s, this so-called “miasmatic” explanation for cholera had a challenger: the idea that the disease was caused by contaminated water. In 1854, in what is now feted as the dawn of epidemiology, British physician John Snow traced the source of an outbreak in Soho, London, to a water pump on Broad Street. When the pump handle was removed, cholera cases quickly disappeared.

The same year, Italian anatomist and germ theory pioneer Filippo Pacini  identified a comma-shaped bacillus he named “Vibrio” while examining the intestinal mucosa of dead cholera victims under the microscope. His findings were largely ignored at the time, however, so it was left to the German physician-scientist Robert Koch to claim the credit for the discovery. He identified the same microbe in Egypt in 1884 and, working in India a few months later, reported that the bacilli were always found in patients with cholera, but never in those with diarrhea from other causes.

Koch’s findings did not immediately put an end to the use of air purification measures, as many still clung to the miasmatic explanation. But by the end of the 19th century, cholera was known to be caused by a microbe. The vinegar bags were on the way out, while improved sanitation and a vaccine—first developed for cholera by Waldemer Haffkine in 1892—were emerging as new methods for preventing this dreaded disease.