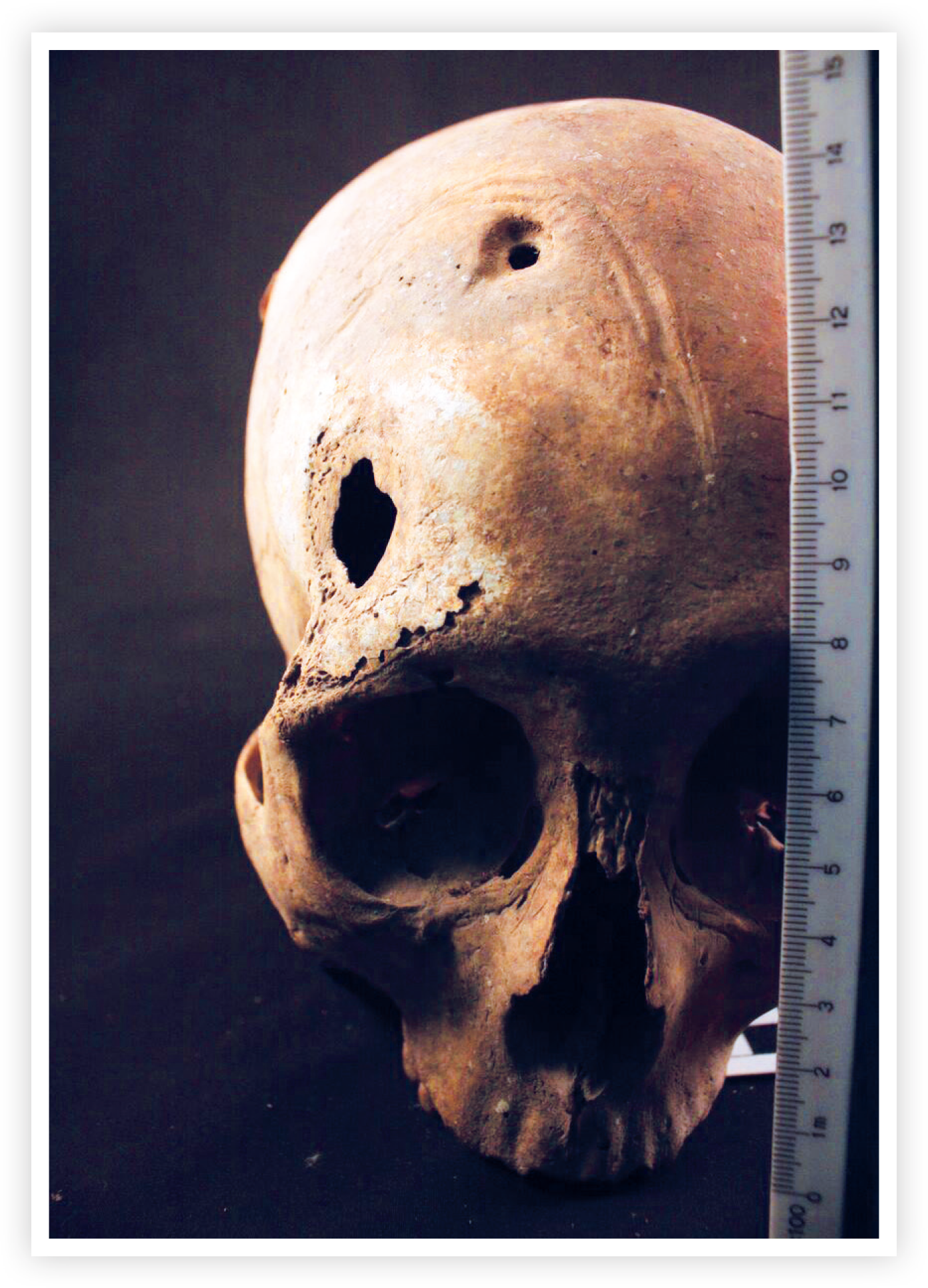 HOLES IN THE HEAD: The skull of a young Chanka man who lived between 1170-1270 shows evidence of two trepanations performed years apart. Kurin notes that the hole near the top of the head was made first, likely with a hand drill, while the hole above the eye was made through repeated scraping with a sharp stone.
DANIELLE KURIN

In the long history of trepanation—removing a piece of the human skull—residents of the Andes were relative latecomers, likely beginning the practice around 400 BCE, based on archaeological data. But ancient Peru stands out for the variety of techniques used and the scale at which trepanation took place. More than 800 pre-Columbian trepanned skulls have been discovered in that country, more than in any other place in the world.

Many of those were unearthed by a team led by Danielle Kurin, a bioarchaeologist at the University of California,...

The Chankas made the holes by scraping away at the skull bone, boring or drilling holes into it, or by cutting in circles or lines. Their tools included obsidian knives and other sharp stones. Among the archaeological remains, which dated back to circa 1000-1250 CE, Kurin also found drill bits that matched the sizes of the trepanned holes. This suggests, she says, that the Chankas had a “standardized toolkit.”

Many patients survived the procedure: Kurin found bony extensions around the edges of their skull holes, evidence of healing. Other mummified skulls with closely shaved hair around the holes show signs that people had applied a poultice to the wound site. “What we think we’re seeing over time is them kind of experimenting with different surgical techniques,” says Kurin. Patients whose holes were formed from scraping were the most likely to survive, followed by those whose skulls had been cut into; subjects whose skulls were drilled into were the least likely to recover. Kurin also found that practitioners had trepanned dried, long-dead skulls in various ways, perhaps indicating that they were refining the techniques for use on the living.

Trepanation in Peru ended with the Spanish conquest.

Archaeologist and newspaper editor Ephraim George Squier, sent to the country by Abraham Lincoln in 1863, acquired the first-known trepanned skull from a cemetery near Cuzco, Peru. The members of the New York Academy of Medicine examined the cuts around the rectangular hole in the skull and determined that it was made by human hands.

From about 1000-1400 CE, residents of what’s now Peru had a success rate almost twice as high as that of Civil War battlefield doctors of Lincoln’s time who performed trepanations to treat head wounds. Though the ancient Andeans lacked knowledge of microbes or anesthesia, they weren’t operating in germ-ridden hospitals, and they used newly made instruments for each patient, notes Kurin.

She points out that the time period of the skulls she found was one of cultural turmoil for the Chankas, following the collapse of the Wari Empire, the political system that had ruled them for about 500 years. “Along with this deprivation and violence, we see innovation and resilience,” she says. “We’re seeing people who are not giving up . . . they’re innovating, and developing over time a pretty intense and invasive therapeutic means of saving lives. And in many cases, they’re successful and [the patients are] being cared for by the community.”