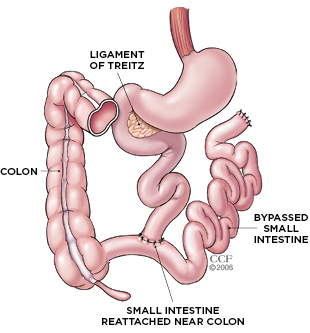 CUT-AND-PASTE GI TRACT: The intestine is divided into three segments: the duodenum, the jejunum, and the ileum. Surgeons performing jejunoileal bypass surgery would sever the small intestine in the jejunal region, about 35 cm below its attachment to the ligament of Treitz. The cut end was then sewn into an area of the ileal segment, about 10 cm from its natural attachment to the large intestine, or colon. As a result, about 90 percent of the small bowel was bypassed, greatly limiting micronutrient absorption. The remaining section of small intestine itself rarely caused any problems, but patients who underwent the procedure suffered severe malnutrition, often leading to organ failure and death. CLEVELAND CLINICIn 2009, Dushyant Singh, a gastroenterologist at Overland Park Regional Medical Center in Shawnee, Kansas, met a 64-year-old man with advanced liver disease, as well as a long history of kidney stones, progressive kidney disease, arthritis, diarrhea,...

Doctors first began offering jejunoileal bypass, one of the earliest bariatric surgeries, in the late 1960s, after surgeons noticed that patients who had lost a portion of their small intestine would lose weight, even as they ate more. The procedure involved bypassing about 90 percent of the small intestine to short-circuit nutrient absorption. And it worked. Patients immediately started shedding pounds. More than 100,000 overweight people chose to undergo the surgery. “Every decade has a new fashion,” says Singh. “[Jejunoileal bypass] was the fashion statement in the early ’70s. Everybody was getting this.”

But in addition to absorbing fewer calories from the food they ate, jejunoileal bypass patients were also absorbing fewer micronutrients. Soon, they began having trouble seeing at night because they became deficient in vitamin A. Low levels of vitamin D caused fatigue; lack of vitamin E caused hair loss; vitamin K deficiencies prevented clotting. Chronic diarrhea led to fluid and electrolyte imbalances that damaged vital organs. Ultimately, patients ended up with anemia, liver failure, renal failure, and even cardiomyopathy. Many of the patients died before their doctors could pinpoint the problem.

Eventually, physicians made the link between the surgery and subsequent malnutrition, and by 1980 jejunoileal bypass had fallen out of favor. These days, bariatric surgery involves shrinking the size of the stomach, to reduce caloric intake, and sometimes bypassing just a few feet of the small intestine. “The goal nowadays is to keep the small bowel as much as possible,” Singh says.

As for those unfortunate patients who received jejunoileal bypass surgery, some had the procedure successfully reversed, and their health improved. Of those who did not have their small bowels restored, most have died. “It’s very rare to see a person 40 years down the road,” Singh says.

But after tracking down the archived medical records of the 64-year-old man who came into Singh’s office, the doctor learned that his suspicions had been spot on. Unfortunately, by that time it was too late. The patient died a month after Singh published his case report. “The biggest problem is misdiagnosis,” Singh says. “If you don’t know the diagnosis, you can’t treat it.” Like his patient, many who’ve undergone the procedure simply have “gastric bypass” noted in their charts, says Singh. “But it’s not a gastric bypass.”