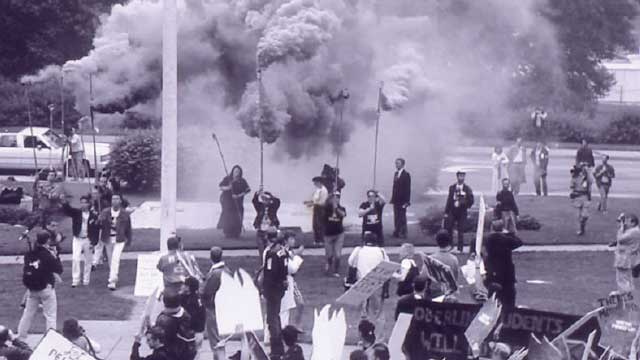 SPEAKING OUT, ACTING UP: AIDS activists from around the country came together to “Storm the NIH” on May 21, 1990, setting off colored smoke bombs en route to buildings where NIH and NIAID directors had their offices. The demonstration “made a huge statement” about activists’ demands for increased patient access to clinical trial decisions, says activist Peter Staley. “The people whose minds were ultimately changed: this action made very clear to them how important this goal was to us.”FLICKR, NIH HISTORY OFFICE

National Institutes of Allergy and Infectious Disease (NIAID) director Anthony Fauci raced down the stairs of Building 31. Roughly 1,000 AIDS activists filled the National Institutes of Health (NIH) campus in Bethesda, Maryland, armed with signs ranging from relatively benign expressions of discontent with the state of AIDS research (“We’re Fired Up”) to attacks directed at Fauci himself  (“Fuck You, Fauci”).

Groups split off to perform...

Fauci, who had met with Staley and other activists previously, most recently at a dinner held at NIAID deputy director Jim Hill’s house not long before the current demonstration, spotted police trying to pull Staley down and became “very concerned because I didn’t want him to get hurt.” By the time Fauci reached the ground floor, Staley’s hands were zip-tied behind him, and he was being removed by an NIH police officer. “As he walked by,” Fauci recalls, “he looked up at me with a big grin on his face and said, ‘Tony, I did it! I was the first one to get arrested.’”

The “Storm the NIH” demonstration marked the climax in a series of public events aimed at drawing attention to the AIDS crisis, community concerns, and activist-led clinical-trial critiques. “After you make a phone call, after you write a letter, after you request a meeting, and those requests or either ignored or denied, then you need to create more pressure,” says ACT UP alumnus David Barr, now a senior consultant at the Fremont Center, an HIV/AIDS advocacy organization in New York State. “The demonstrations were a way of both creating pressure and bringing the issues to the public.”

By 1990, activists had made headway pushing for access to promising experimental drugs before clinical trials were complete. But many felt the NIAID director had fallen short on promises to afford them research access and input. The approved antiretroviral azidothymidine had shaky effectiveness and taxing toxicity. There was a dearth of treatments for opportunistic infections, not to mention concerns over funding, opaque clinical trial protocols, and trial requirements that deterred participation and neglected women, minorities, and injection drug users.

“There was a feeling by ACT UP and others that [trials] needed to be more open to the communities that were dealing with AIDS at the time,” explains Mark Harrington, who was a member of ACT UP’s Treatment and Data Committee and is now executive director of the Treatment Action Group, an advocacy organization that has its roots in the ACT UP movement. “Some of us wanted to participate in the scientific discussions and decisions that got made.”

Despite these frustrations, the demonstration in Bethesda that day was “a blast,” Harrington says. “Everybody knew what we wanted. It was exhilarating. It was great to be with everyone, and it was great to be making our points.”

The very next month, things started to change. At the International Conference on AIDS in San Francisco, Fauci and Staley gave speeches highlighting researchers’ and activists’ shared goals. Shortly after, NIAID’s AIDS Clinical Trial Group (ACTG) opened its doors to HIV advocates and community members, who would go on to play active roles on ACTG committees and to serve as advisors at ACTG clinical trial sites across the country.

“That had never happened before in the history of the NIH,” says Barr, who believes the NIH demonstration was one of several factors prompting increased inclusiveness and openness by investigators, “and it was a model that was replicated in other disease areas.”