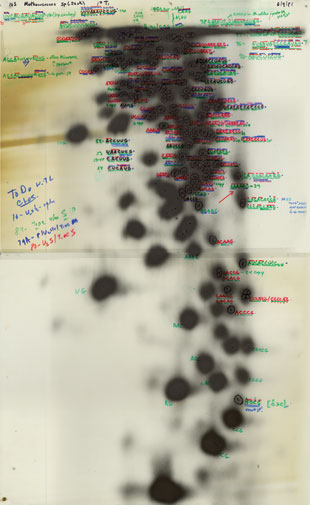 FINGERPRINT: X-ray film “fingerprints” of digested small subunit ribosomal RNAs, such as this one annotated by Carl Woese, led Woese to the discovery of the three domains of life.COURTESY OF NORMAN R. PACE, JAN SAPP, AND NIGEL GOLDENFELD. PNAS, 109:1011–18, 2012.In a letter to Francis Crick dated June 24, 1969, Carl Woese, a microbiologist at the University of Illinois, wrote that he wanted to use “the cell’s ‘internal fossil record’”— specifically, the RNA of the cell’s translation machinery—“to extend our knowledge of evolution backward in time by a billion years or so.” Soon enough, Woese’s team had RNA sequencing up and running in the lab.

The protocol consisted of digestion and two-dimensional electrophoresis of radioactive small-subunit (16S or 18S) ribosomal RNA. When exposed to X-ray film, the separated fragments generated a unique fingerprint, which Woese interpreted based on the position of the spots.

“Each one of those spots was a puzzle,” explains Fox. “If you do the same puzzle many times, you start to recognize it.” Initially, the researchers sequenced ribosomal RNA from readily available laboratory strains of bacteria, and Woese grew to expect the same spots that appeared over and over again on the film. But later, the lab’s ability to grow methanogens—microorganisms that produce methane and were not well-studied at the time—led to a eureka moment.

“When we did that first methanogen catalog, he started analyzing the data and all of a sudden the things he expected to find weren’t there,” says Fox. Woese immediately noticed that the fingerprints of two methanogen species, then referred to as bacteria, were missing two distinct spots. Upon secondary examination, these species also lacked fragments universal to previously examined bacteria. It became clear these organisms belonged to a distinct group.

In 1977, Woese and Fox published a landmark paper in PNAS containing just one table illustrating the relationships between the fragment catalogs of 13 species. The data revealed three distinct groups, which Woese and Fox described as “urkingdoms”: eubacteria, archaebacteria, and urkaryotes—their name for the presumed ancestor of the eukaryotes. Though some scientists balked at the idea of three urkingdoms replacing the conventional two, the three domains of life—archaea, bacteria, and eukarya—eventually became widely accepted.

With the more recent availability of vast amounts of genomic data, some now challenge the three-domain tree of life, and instead support a tree where bacteria and archaea are the sole domains, with eukaryotes branching from the archaea. But Woese’s three domains have not lost their stronghold in biology dogma just yet.

Fox wonders if the archaea would have been missed if a different technique had been employed. Fingerprinting gave “a much more black-and-white outcome than you would have if you were actually using modern sequencing,” he says. With the percent identity comparisons that scientists use today, “archaea would probably just be considered an odd niche of bacteria.”