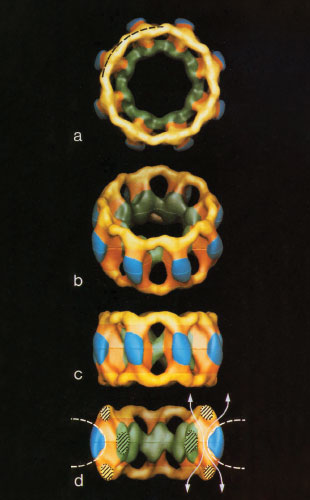 STATE OF THE ART: Using a novel combination of imaging techniques, Ronald Milligan, a cell biologist at the Scripps Research Institute, and two of his colleagues published this model of a Xenopus laevis nuclear pore in 1992. Rather than examining one electron micrograph at a time, the researchers averaged many images together for more-reliable results. And by tilting their samples at various angles, they were able to translate flat images into a three-dimensional model, revealing an unexpected dimension of symmetry.CELL, 69:1133-41, 1992, COURTESY RON MILLIGANWhen he was a postdoc in the 1970s, Ronald Milligan came across a grainy electron micrograph in a textbook that depicted the nuclear pore complex, a relatively unstudied but crucial structure responsible for shuttling molecules in and out of the nucleus. The blurry image, published in 1974 by Alexander Fabergé of the University of Texas at Austin, showed something remarkable: the pores...

Milligan was taken in by indications that this tiny gateway had a symmetrical design. From sea anemones to flower petals, symmetry is everywhere in nature, and scientists were only just beginning to open a window onto the molecular world, revealing its varied architecture through advances in microscopy. Even those early images of the nuclear pore “are so dramatic,” Milligan says. “Everyone is drawn to them. They’re like little flowers.”

Images produced by Milligan and others over the next decade revealed only a fuzzy ring, and “very few of them gave these hints of eightfold symmetry.” It was not until 1992 that Milligan finally resolved the basic shape and structure of this mysterious portal in the nuclear membrane. Milligan had just established a molecular microscopy lab at the Scripps Research Institute, and along with one of his lab’s first postdocs and a colleague at the University of California, San Diego, he came at the problem with state-of-the-art imaging analysis technology.

By extracting nuclear pores from the surrounding membranes of frog oocyte nuclei and applying early tomography techniques, the team ended up with a three-dimensional map of the nuclear pore and its constituent protein subunits. That first glimpse of symmetry from years earlier came into focus: the nuclear pore complex was not only made up of eight identical structures repeated around its  circumference, it was also symmetric across the plane of the membrane (Cell, 69:1133-41, 1992).

A number of evolutionary concepts could explain the attractive design of this cellular machinery. Christopher Akey, a biophysicist at Boston University who coauthored another imaging study of the nuclear pore complex a year after Milligan and colleagues (J Cell Biol, 122:1-19, 1993), notes that iteration is the easiest way to build a structure as large as the nuclear pore, like building a wall brick by brick. “It’s more economical to make smaller proteins—even if you have to make a lot of them—that self-assemble,” Akey explains, because the odds of an error in any one protein are lower.

Despite the structure’s apparent symmetry, Milligan knew there was more to the story. “We suspected that in the cell, because there was directed transport in either direction, [the nuclear pore] couldn’t possibly be totally symmetric,” he says. He and his colleagues hypothesized “elaborations added to the basic architecture that confer sidedness and enable directed transportation.” The idea was borne out by later research from other labs showing smaller structures on either side of the pore, completing Milligan’s picture of this unique structure.