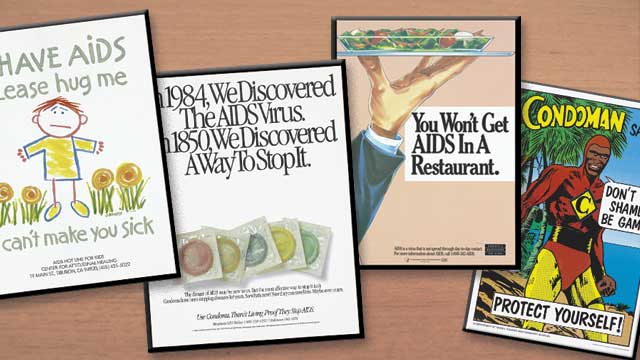 RAISING AWARENESS, CHANGING BEHAVIOR: Early HIV/AIDS posters, including “I have AIDS / Please hug me” designed by the California-based Center for Attitudinal Healing in 1987 and the Centers for Disease Control and Prevention’s “You Won’t Get AIDS in a Restaurant” from the early 1990s, focused on educating the public about how the disease was transmitted. Attention subsequently shifted to encouraging behavioral changes, especially condom use. The Maryland Department of Health and Mental Hygiene’s 1988 message about the invention of condoms in 1850 appealed to a general audience, while Australia’s comic-like Condoman character from the early 1990s specifically targeted young Aboriginal men.WELLCOME LIBRARY, LONDON

In 1985, 95 percent of Americans had heard of AIDS, and 47 percent admitted they would prefer to avoid HIV-positive people, according to a Kaiser Family Foundation report. The following year, to promote the scientific knowledge detailed in the Surgeon General’s new report on the...

Originally appearing in print ads, on billboards, and on public transportation, the posters—humble messengers of the multimedia campaign—serve today as reminders of how public understanding of the disease progressed. The earliest images fought misinformation about disease transmission. Later, the focus shifted from raising awareness to changing risky behavior by encouraging condom use and discouraging the sharing of hypodermic needles. Messaging also began to target specific groups—such as gay men and minority communities—that were hardest hit by the virus. For example, Australia’s Condoman character merged a masculine, muscled superhero with a safe-sex message to dispel the idea, common among young Aboriginal men, that condom use was unmanly.

Because they represent the key messages of the earliest eras of HIV/AIDS education, “these posters are classic,” says Seth Noar, a professor of health communication at the University of North Carolina at Chapel Hill. “[They] likely played a role in both increasing knowledge about HIV and then later trying to impact behavior,” he says, adding that it’s hard to imagine seeing similar posters—with what are now such obvious, well-known facts—these days.