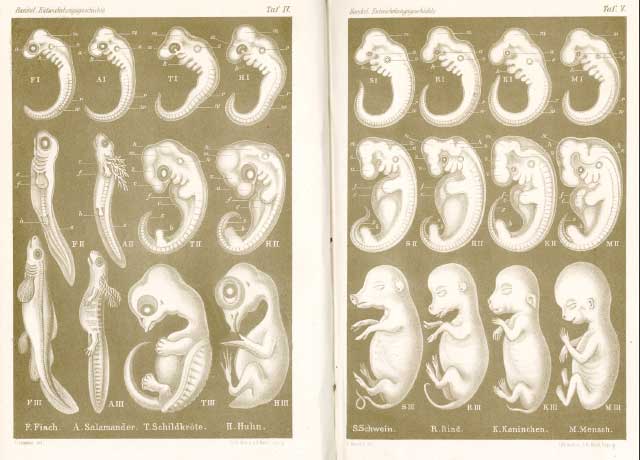 Ernst Haeckel, a biologist, artist, and philosopher born in Prussia in the 1830s, played a key role in spreading Darwinism in Germany. He was also deeply fascinated by embryology and illustrated some of the most remarkable comparisons of vertebrate embryos in his day. These images were widely printed and copied, both to argue for Haeckel’s controversial evolutionary theories and to debunk them.

Haeckel’s most influential idea was his now-infamous biogenetic law, summarized by the phrase “ontogeny recapitulates phylogeny”—in other words, an organism’s embryo progresses through stages of development that mirror its evolutionary history. According to this theory, embryos of more advanced...

The biogenetic law was popular among scientists at the time, including Darwin, and Haeckel used his drawings of embryos to support his own theory. His textbook on comparative embryology, Anthropogenie—in which he published some of his most famous illustrations of embryos—was devoted to this idea, says Nick Hopwood, a historian of science and medicine at the University of Cambridge and author of Haeckel’s Embryos: Images, Evolution and Fraud, published in 2015.

A number of Haeckel’s contemporaries, such as Wilhelm His Sr., a Swiss anatomist, challenged the biogenetic law and alleged that Haeckel’s drawings contained inaccuracies and misleading representations. One such accusation was that Haeckel had reprinted a single woodcut to create illustrations of a mammal, a bird, and a reptile in his first book, Natürliche Schöpfungsgeschichte. Haeckel admitted to this malpractice and apologized for it in a later edition of the book.

Haeckel’s embryo drawings were widely circulated. They appeared in some mid-20th century high school and college biology textbooks in the United States, often bearing the name of a Canadian-British evolutionary biologist and physiologist, George John Romanes, who had copied Haeckel’s work. Authors and publishers used Romanes’s facsimile to dispute Haeckel’s own theories, unaware that Haeckel himself had drawn the original content, Hopwood says.

In later years, Haeckel’s original images reappeared, this time in the developmental biology literature, often to argue for similarities across species during embryonic growth. Although biologists still criticized the drawings for containing inaccuracies, the idea that early commonalities exist more closely aligns with what scientists believe today.

“We now think that embryos resemble not the adults of ancestral species, but the embryos of ancestral species,” Michael Richardson, a professor of evolutionary developmental zoology at Leiden University in the Netherlands, wrote in an email. He adds that there is still the belief among biologists that a “phylotypic period,” when embryos share strong similarities across species, exists, as Haeckel often demonstrated in the top row of his drawings. However, according to Richardson, more recent evidence points to commonalities at the molecular level.