After completing his studies in medicine and biology, a restless Ernst Haeckel set off for Italy in 1859 to study art and marine biology. The diversity of life fascinated the 26-year-old Prussian, and in addition to painting landscapes, he spent the climactic months of his stay glued to his microscope observing and sketching radiolaria—protozoa encased in delicately ornate silica skeletons—that he collected off the Italian coast and sent back to Berlin. He was amazed by the diversity of their forms, which seemed to come in limitless, but sortable, varieties, and on returning from Italy set to work cataloging them. During this time of youthful soul-searching and vocation-finding, Haeckel stumbled upon a German translation of the recently published Origin of Species and experienced one of the most momentous revelations of his career.

In the fourth chapter of Charles Darwin’s treatise was a drawing that illustrated the evolution of a single hypothetical species into a genus of 8 species across 14,000 generations. Darwin’s tree-like image was not the first to show the interrelatedness of all the planet’s life forms, but nonetheless it set Haeckel on a mission: to craft real evolutionary trees that organized the overwhelming number of species on Earth. Over the years he created illustrations of many such trees, using his knowledge of morphology and his theory that the evolutionary past of an organism can be gleaned from its embryonic development. The first of these were published in his 1866 monograph Generelle Morphologie der Organismen. Through this work, Haeckel made some significant contributions to biology, such as the addition of a third kingdom—the unicellular protists—to the already existing plant and animal kingdoms. His trees were also the first to depict humans as branching off from the primate lineages.

But perhaps Haeckel’s best-known tree of life is his highly stylized Pedigree of Man, originally published in German in 1874, which places Man at the top of an old tree, above his evolutionary forebears. Although Haeckel’s trees broke new ground, many historians believe that he fell prey to the contemporary notion that evolution progresses towards a more perfect form, and that he never truly accepted the implications of Darwin’s theory of natural selection, which does not hold that humans are the pinnacle of evolutionary perfection.

However, computational genomicist Mark Ragan of the University of Queensland, Australia begs to differ. “Haeckel is showing man as a part of the whole lineage of animals,” he says. While most trees start at the bottom, showing the routes of evolution from one basal single-celled species, Haeckel’s Pedigree starts at the top and traces the lineage of Man downward. It means to place humans in the context of evolutionary history, he adds, not to show us at the peak. 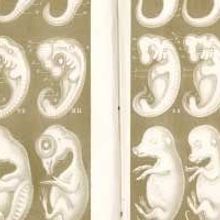 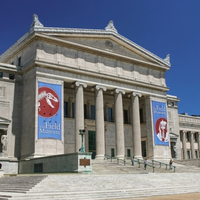