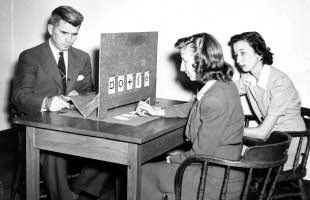 DIVINING AN ANSWER: J.B. Rhine’s early experiments at Duke University employed a set of cards named “the Zener deck” after its inventor, Karl Zener, one of Rhine’s collaborators. The deck consists of 25 cards, with five of each symbol: square, circle, cross, squiggly lines, and star. Here, Rhine is shown testing a woman for ESP using the cards in the presence of an assistant (right). “You shuffle the cards and hopefully randomize them,” explains Terence Hines of Pace University. “In the simplest version, I’m sitting across the table from you and you’re the subject or ‘receiver.’ I lay a card face down, you don’t know what it is, and you guess.” Although Zener cards are now considered “old hat” in parapsychology research, Hines notes, there’s no shortage of the cards online for contemporary ESP enthusiasts to work with.DUKE UNIVERISTY ARCHIVESIn 1926, American medium Mina Crandon held a...

However, at least one audience member at this particular séance—a young botanist named Joseph Banks Rhine—was unimpressed. Crandon, he claimed in a review of the performance, had not made a megaphone levitate, as the audience had believed. Instead, he wrote, she’d simply kicked it into the air. Crandon’s supporters were outraged; Doyle reportedly penned a scathing response containing the line, “J. B. Rhine is an ass.”

Yet Rhine, who himself had recently attended a lecture by Doyle on the evidence for extra-sensory perception (ESP), was not an unbeliever in psychic powers. Far from it, says Pace University’s Terence Hines, a psychologist and author of Pseudoscience and the Paranormal (2003). “There was great interest in showing ESP was real,” and J.B. Rhine, a scientist, believed he had the tools.

Ditching plant science, Rhine moved to Duke University in 1927 to set about demonstrating ESP through experiments. The most famous of these experiments involved guessing the symbol on a card concealed by an experimenter. Thousands of subjects were tested to see if they could “receive” symbols through ESP, and Rhine soon reported astonishing successes. From a deck containing five different symbols, one of Rhine’s assistants, Hubert Pearce, apparently received the correct symbol 40 percent of the time—double what would be expected by chance.

But other researchers, including parapsychologists, found Rhine’s experiments concerning. “He wasn’t a very good experimentalist,” says Hines. “Lab” conditions were loosely controlled: the receiver was allowed to shuffle the cards; some trials were conducted in Rhine’s car. The quality of the cards themselves also left something to be desired. “When the cards were printed,” says Hines, “sometimes a little bit of the design showed through.” Symbols printed on thicker card stock proved to yield less accurate responses, he adds.

An idiosyncratic application of statistics allowed Rhine to detect results where other researchers failed. “He would do a series of studies and some people would score sometimes significantly above chance,” says Hines. “He said that was evidence for ESP. Sometimes, people would score significantly below chance, and that was evidence for ESP missing, which, he said, was much more mysterious.”

Unfazed by growing criticism, Rhine published Extra-Sensory Perception in 1934, declaring ESP “an actual and demonstrable occurrence.” Three decades later, he founded the Institute for Parapsychology as part of the Foundation for Research on the Nature of Man, now the Rhine Research Center, in North Carolina. And despite decades of failure to replicate his findings, the appeal of ESP persists. One likely explanation, suspects Hines, is that humans are “terrible” at processing coincidence. “People have subjective experiences that lead them to believe ‘something’ is happening,” he says. “Plus, it’s a very attractive idea. It’d be nifty it were true.”