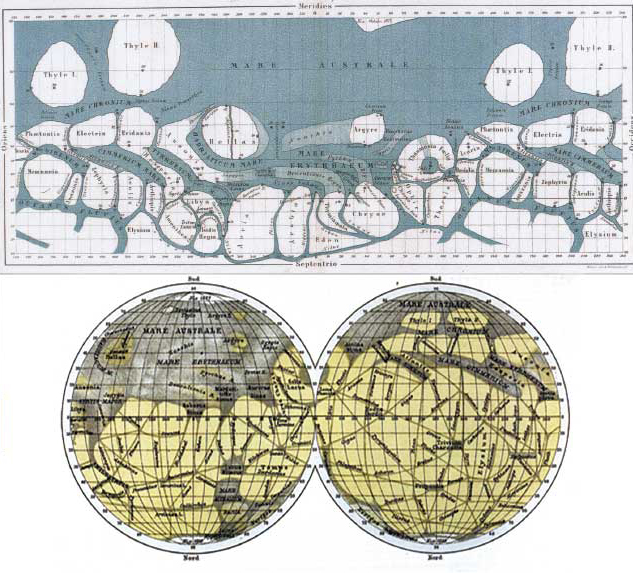 OTHERWORLDLY CARTOGRAPHY: In Schiaparelli’s first detailed map of Mars, finished in 1878 (top), he colored channels blue and their surroundings white. His later schematics (bottom, completed in 1888) became more abstract, with straight lines and dustier shades. Despite the detail in these drawings, it was incredibly hard to see the features of Mars through telescopes of the time. Astronomers created intricate diagrams like these by compiling small sketches from multiple nights of observation. © SCIENCE HISTORY IMAGES/ALAMY STOCK PHOTO; WIKIMEDIA/Giovanni Schiaparelli

When Italian astronomer Giovanni Schiaparelli peered at Mars through a powerful telescope in the late 1800s, he observed dark channels raked across its surface. These features became the key characteristics in his detailed maps of the planet, which fueled more than a decade of wild speculation regarding alien-built canals.

Schiaparelli’s drawings were provocative. His first detailed map of Mars, published in 1877, laid out an intricate network of...

These 19th-century diagrams set the stage for the work of Percival Lowell, a wealthy American businessman and amateur astronomer. Lowell built his own private observatory, one of the best for viewing Mars at the time, and drew his own detailed maps of the planet.

Lowell believed the canals Schiaparelli observed were made by intelligent beings, and proposed that Mars was covered in an intricate irrigation system that brought water from the poles to grow vegetation on the rest of the planet. Using his own observations as evidence, Lowell championed this hypothesis in lectures, books, and stories in the popular press. His extraordinary claim made headlines in both North America and Europe. The New York Times, for example, published the 1911 headline, “Martians build two immense canals in two years.”

These concepts also influenced popular culture: from H.G. Wells’s War of the Worlds in 1898 to Ray Bradbury’s Martian Chronicles in 1950, the notion of an intelligent Martian race persisted for decades in science fiction.

Many scientists at the time were extremely skeptical of Lowell’s claims. The belief in Martian engineering received a huge blow in 1909, when the French astronomer Eugène Antoniadi, who was observing Mars through one of the most powerful telescopes of the time, published a detailed map showing that up close, the canals were actually smaller, irregular features more indicative of natural origins.

Some historians attribute the belief that the Red Planet was inhabited by intelligent beings to mistranslation of the Italian word canali to “canals” in English—the latter conveying artificiality. But Lane maintains the notion sprang mainly from Schiaparelli’s maps themselves. “It’s a cartographic process that I think is really influential,” she says. “Once you saw these linear features—that’s what convinced people that they were probably canals.”

Even today, it’s still unclear what, exactly, Schiaparelli was seeing. Telescopes at the time were much weaker than today’s. “The big limitation was that Schiaparelli was working visually,” says Steven Dutch, a professor emeritus of geology at the University of Wisconsin–Green Bay. “Even through a very large telescope, Mars looked about the size of the full moon to the unaided eye.”