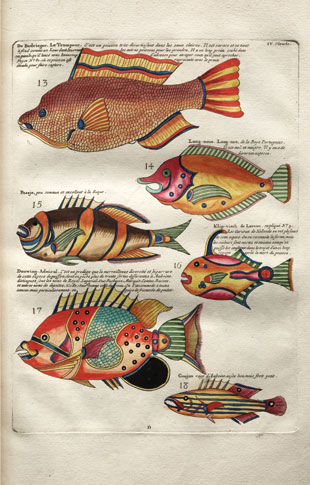 SOMETHING’S FISHY: Though many aspects of the drawings in Fishes, Crayfishes and Crabs do not represent reality, more than half of the engravings can be identified to species.WARNOCK LIBRARY AND OCTAVO CORP.In 1685, when Louis Renard was seven or eight years old, he and his family left their native France to settle in the Netherlands, where Huguenots—French Protestants—could worship without fear of persecution. In Amsterdam, Renard led a colorful life as a spy, a seller of patent medicines, and a book publisher until his death in 1746. His only known likeness shows him smoking a pipe in a brothel as scantily clad women parade by.

As the Age of Enlightenment dawned across Europe, Renard published Fishes, Crayfishes and Crabs, of Diverse Colors and Extraordinary Form, That Are Found around the Islands of the Moluccas and on the Coasts of the Southern Lands, his only scientific book....

The book also asserts that the engravings are authentic, but Pietsch, whose careful annotation and translation gives vast detail about Renard’s life and work, initially disagreed. “Despite these repeated promises that nothing is embellished beyond the truth, the colors used in the paintings are, more often than not, applied in a totally arbitrary fashion and have no similarity whatsoever to those of the living animal,” Pietsch wrote in Natural History. “Even more unfortunate is the gross inaccuracy of many of the renderings themselves, some being impossible to identify with actual species.” Readers in the eighteenth century had reacted similarly. “Of course, my first impression, like everyone else, was that these are just totally mythological, fantastic things,” Pietsch recently told The Scientist.

No existing historical records show that Renard ever went to the Moluccas—now known as the Maluku Islands, which are part of modern-day Indonesia—so someone else had to have created the images. Though multiple artists probably participated, one known contributor was Samuel Fallours, who worked for the Dutch East India Company, first as a soldier, then as an assistant to religious leaders on the islands. “In what’s now Indonesia . . . artists were making these drawings because they were getting paid,” says Pietsch, which supported his suspicion that the engravings were inauthentic.

But as Pietsch examined the engravings more closely, he realized that more than half of them could be identified to species, and still more  to genus or family, leaving fewer than 10 percent of the engravings based on no known animal. “Thus, to cast the work off as being without scientific merit is to greatly underestimate its value,” Pietsch wrote in the commentary accompanying his 1995 English translation of Fishes, Crayfishes and Crabs. With this collection of images and descriptions, Renard “has given us an intriguing glimpse of what science was like in the late seventeenth and early eighteenth centuries.”