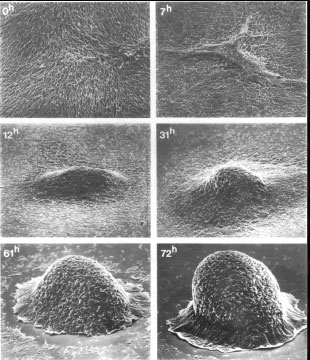 AGGREGATION IN ACTION: Dale Kaiser and Jerry Kuner’s panel of six electron micrographs shows aggregation and the formation of a fruiting body by Myxococcus xanthus strain DK 1622 cells. The researchers starved these bacteria of nutrients over the course of 72 hours by replacing a liquid growth medium with distilled water. With the addition of a calcium chloride solution, bacteria kept at a constant pH (6.8) aggregated and then formed a fruiting body—a cluster of cells that would later be filled with spores. The resulting time-lapse micrographs remain some of the clearest pictures of fruiting body formation in this gram-negative bacterium.J BACTERIOL, 151:458-61, 1982Starting in the late 1970s, Stanford University’s Dale Kaiser worked for years to visualize a certain bacterial phenomenon. Microbiologists had known that, when starved, some soil-dwelling myxobacteria aggregate, forming so-called fruiting bodies full of hardy spores. Yet capturing this behavior in action, Kaiser...

Working with a strain of Myxococcus xanthus, Kaiser and his then graduate student Jerry Kuner had the idea that perhaps the medium was holding them back. They decided to abandon traditional, solid agar—which often contained impurities, compromising starvation and fouling imaging studies—and opted instead to culture the cells in a defined liquid medium.

The team at first grew M. xanthus cells in a minimally nutritive liquid medium Kaiser and another colleague described in February 1978, called CTT. Overnight, the cells formed a film at the bottom of the dish, so adherent that the researchers could replace the liquid medium with water without disturbing the bacteria, effectively starving the cells, which then aggregated and formed fruiting bodies.

Culturing a less adherent mutant strain of M. xanthus atop a cover slip in a dish and, again, replacing leftover CTT liquid medium with water, Kaiser and Kuner saw that the starved cells failed to aggregate. Tinkering with the nutrients they included in the mixture, the team found that one mineral had been missing. Because the cells aggregated with the addition of calcium chloride (CaCl2), but not magnesium chloride (MgCl2), the researchers deduced that calcium ions were required.

“If calcium was added to the medium, the cells would stick to the plastic and form a kind of biofilm,” says Kaiser. “And in that biofilm, the cells would aggregate. By 72 hours, the aggregate was about the size of a normal fruiting body.”

Kaiser and Kuner removed the cover slips from the dishes, exposed them to fresh aggregation-inducing solution containing a fixative, coated them with gold, and imaged the slides using field-emission scanning electron microscopy. The resulting pictures—compiled in a time-series figure of six micrographs that took up more than three-quarters of a printed page—appeared in the Journal of Bacteriology in July 1982 (151:458-61).

“You can take a long time to describe fruiting body formation and how amazing it is, but those pictures really jump out at you, telling the whole story,” says Rutgers University’s Ann Stock, who penned a perspective on the 1982 paper this February (J Bacteriol, 198:602, 2016).

Other groups have since applied the submerged culture method described by Kaiser and Kuner to further study fruiting body formation in M. xanthus and related species. “It looked like we had an in vitro method of forming fruiting bodies,” says Kaiser.

The team’s images are still reprinted today. Stock says, “These images spoke to me from my many years of listening to Myxococcus xanthus talks,” starting when she was a graduate student. “It’s a pretty interesting organism with its multicellular, social lifestyle. It stands out among the bacteria.”