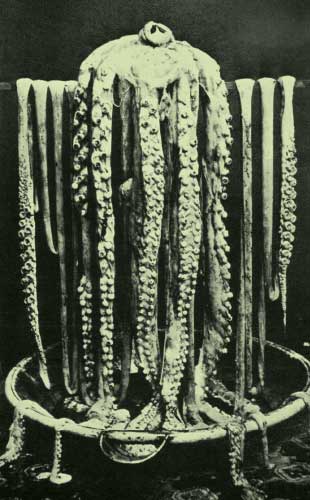 LAID OUT: The first photograph of most of a giant squid, now displayed in the Smithsonian National Museum of Natural History, was taken for amateur naturalist Moses Harvey of St. John’s, Newfoundland, in 1874. The 27-foot-long carcass (along with this photo of its arms draped on a rail over a bathtub) made its way to zoologist Addison Emery Verrill, who took detailed notes on the specimen. “The tub is 38½ inches in diameter,” he noted on the image. “On the club of the long arm there is a marginal row of small suckers on each side alternating with the larger ones.” Harvey displayed more awe. “I knew that I had in my possession what all the savants in the world did not,” he wrote in his journal. “A photograph could not lie and would silence the gainsayers.”WIKIMEDIA COMMONSIn Portugal Cove, Newfoundland, a small fishing boat was attacked...

The anglers fed one tentacle to a dog, according to some accounts; the other, measuring 19 feet in length, they carried to nearby St. John’s, to the home of minister and amateur naturalist Moses Harvey. “Harvey was Presbyterian Irish, incredibly homesick for Ireland, and had lost himself in all things natural,” says Matthew Gavin Frank, who explored Harvey’s life and essays on Newfoundland’s flora and fauna in his 2014 book Preparing the Ghost. “He was known in St. John’s in the mid- and late 1800s as just being crazy after all things from the land and the sea.” Harvey bought the tentacle for $10, says Frank, and estimated the creature it came from to be 72 feet long.

A subject of cautionary tales rather than scientific inquiry, the giant squid was still very much considered part of mythology, Frank says. But the following year, another group of fisherman in Logy Bay near St. John’s port brought Harvey something unequivocally convincing: a whole giant squid that had died thrashing in their nets. “These fisherman had obviously heard that Harvey had paid $10 for a tentacle and thought, ‘Well, goodness, what will he pay for the entire thing?’” Frank says. “The answer was also $10.”

Harvey took the specimen back to his house at 3 Devon Row and draped its 27-foot-long body over a curtain rod above the bathtub. He arranged its tentacles, set up a photograph of the cephalopod hanging from the rail, and then relegated the animal to a vat of brine in the back yard.

News of the squid quickly spread, and “around the globe, Harvey’s photograph was immediately, even by scientists, referred to as ‘the problem of the giant squid,’” Frank says. “The problem, of course, was that now it was real.” While scientists attempted to reconcile this bizarre creature with their view of the animal kingdom, others, including American showman and circus founder P.T. Barnum, began bidding for the carcass.

In the end, Harvey sent his squid to Yale University zoologist Addison Emery Verrill, who was horrified by the specimen’s condition, Frank says. “The carcass had shrunk, desiccated a bit, and some of the suckers had fallen off.” But Verrill went on to publish the world’s first accurate illustrations and descriptions of this hitherto mythical creature.

Still today, nearly 150 years after the photograph was taken, little is known about the ecology of the giant squid. Rarely seen in action, this animal lives at depths of more than 500 meters (1,640 feet), and resists even the most dedicated researchers’ attempts to find it. “The photograph stands as a testament to the fact that this thing still remains, so many years out, so incredibly mysterious,” says Frank. “It’s a source of both frustration and wonder.”